Of our many customs, one of the deepest and most revered is linked to Christmas

Nation strong in its traditions

The ‘For Spiritual Revival’ awards, as well as special Presidential awards to cultural and artistic figures and the ‘Belarusian Sport Olympus’ awards were recently presented at the Palace of the Republic, in the presence of the Patriarchal Exarch of all Belarus. The solemn event symbolizes the sincere gratitude of the country to those who serve with self-sacrifice. Our countrymen inspire pride in our Motherland, making us stronger in our own dedication. 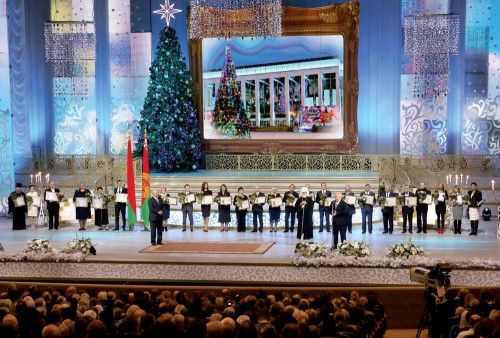 The dramatic and tragic events in neighbouring countries have shown where selfish motives can lead. The storm of international and interfaith conflicts, including terrorist threats, seems to be engulfing the whole world.

Having congratulated all those gathered on the cheerful holiday of Christmas, the President emphasized that the ceremony to present ‘For Spiritual Revival’ awards is purposefully organized at Christmas time. Belarus is committed to Christian values, alongside moral and aesthetic traditions, in developing its nationhood and unity. The President addressed the audience and all citizens, saying, “Under these conditions, the unity and integrity of the nation is to the fore. The New Testament reads: ‘Every kingdom divided against itself becomes a desert, and house falls on house’.”

History shows that the solid well-being of every country relies on peace and accord. The Belarusian nation has always strived towards creativity, diligence, justice and mutual aid. Since time immemorial, we’ve respected those who work to uphold such fundamental moral principles. The President named the merits of the laureates of the ‘For Spiritual Revival’ award, who are highly appreciated by the state and our society. He underlined, “We award those who have dedicated their lives to delivering mercy and aid to others...”

Belarus is committed to creating conditions for self-realization of young citizens, so that they might use their strength and skills for the benefit of their native country. On the solemn awards day, we pay respect to those who work every day to achieve this goal.

Mr. Lukashenko reminded that 2015 is the 70th anniversary of the Great Victory. He noted, “Everything possible is being done in Belarus to preserve its memory. We take good care of the historical truth and try to extract priceless lessons. Thanks to the labour and talents of cultural workers, the new Great Patriotic War History Museum building opened last year and a new exhibition launched at Brest Hero-Fortress Memorial.” The President awarded the Director of Brest Hero-Fortress Memorial, Grigory Bysyuk.

Our country is eager to use global experience but needs to take care not to become overwhelmed by other nations’ culture. Our identity is valuable. We award those who innovate in various genres, creating a new legacy, worldview and traditions.

Ten special Presidential awards were bestowed to masters of arts, author groups and cultural organizations, as well as athletes, who have brought glory to our country internationally. The past year was rich in sport events and Minsk hosted the World Ice Hockey Championship. Our athletes performed well at the Olympic Games in Sochi and, of course, special gratitude goes to their teachers and coaches.

The President emphasized that the health of the nation, physical culture and sports remain a state focus. He commented, “We’d like to see healthy lifestyle, love of sport and active recreation become a tradition among people of all ages. Certainly, our country should rejoice at the vivid triumphs of Belarusian professional athletes, whose lives are inseparable from top-effort sport.”

Mr. Lukashenko passionately thanked the awardees for setting an example of service to the community and genuine love for their country. The ceremony confirmed an ancient truth: good deeds are always rewarded. The country is filled with such deeds and those who fulfil this mission will always be deservedly honoured.

Several groups have been given the President’s ‘For Spiritual Revival’ awards for humanitarian activities, including a group which organizes special social workshops for those with disabilities. The laureates include the Father Superior of the religious community of the Parish of the Church of the Mother of God ‘Joy of All Who Sorrow’ Icon in Minsk (at the Minsk Eparchy of the Belarusian Orthodox Church), Archpriest Igor Korostelev, and the Associate Professor of the Belarusian State Pedagogical University named after Maxim Tank, Marina Kravtsova.

The National Academic Bolshoi Opera and Ballet Theatre of Belarus has been awarded for highlighting national and historical traditions in its performance of the ballet Vytautas.

Other awardees include the Republican Care Home for War and Labour Veterans, which has made a great contribution to improving the country’s social security system and to promoting humanity and kindness. Meanwhile, Zubrenok Children’s Education and Recreation Centre has been recognized for its significant achievements in developing children’s talents, skills and abilities, while nurturing future public leaders.

The Central Committee of the Belarusian Republican Youth Union was also awarded for its significant contribution to promoting patriotism and citizenship.