During working visit to Kazakhstan, Alexander Lukashenko takes part in trilateral meeting with presidents of Kazakhstan and Russia, the three heads of state discussing trade-economic challenges within Eurasian Economic Union

Much to discuss and to consult upon 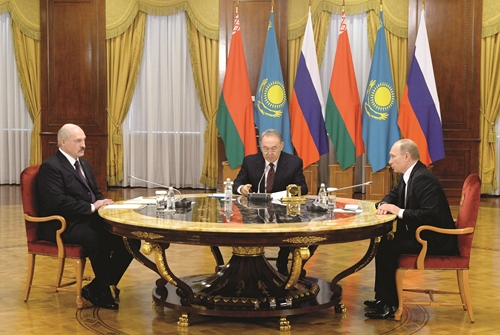 He told Mr. Nazarbayev, “Our relations are sound but our pace of trade co-operation has slowed. I’d like it to develop more actively despite well-known external factors having affected the situation in Kazakhstan and Belarus, as has the almost twice devaluation of the Russian Rouble.”

Mr. Lukashenko recalled that, last year, much attention was paid to problems within the EEU and suggested exchanging views on how best to enlarge the Union, via the accession of Armenia and Kyrgyzstan. The President of Belarus also drew attention to the ongoing presidential election campaign in Kazakhstan, saying, “You know our attitude and that we are rooting for you, wishing you victory.”

President of Kazakhstan Nursultan Nazarbayev noted that the Eurasian Economic Union (launched on January 1st, 2015) owes much to the Belarusian President, who accelerated integration processes. The Kazakh President also underlined the importance of the ‘Normandy Four’ meeting in Minsk. “It’s excellent that such a meeting took place in Minsk. You did a great deal,” stressed Mr. Nazarbayev. “One way or another, the war has stopped; nobody needs a major war, filled with bloodshed and internal confrontation, and that includes us.”

The next day, during a trilateral meeting between the presidents of Belarus, Kazakhstan and Russian, the heads of state discussed existing trade-economic challenges within the work of the Eurasian Economic Union, as well as some international issues.

“It’s clear that, in the run-up to the 70th anniversary of the Great Victory, we should be united. Too many challenges exist and there have even been attempts to rewrite our common history. At this time especially, we should demonstrate political and economic unity,” asserted the President of Belarus.

Mr. Lukashenko emphasised that each year brings new challenges but that the Eurasian Economic Union is providing timely assistance. He urged remembrance of other members of the Union, for whom new development options should be proposed.

Later, after the trilateral meeting, Mr. Lukashenko told journalists that he and his fellow EEU presidents have agreed to meet next on May 8th, in Moscow. He added that the agenda will include issues raised in Astana and his hope that the three EEU member governments will have adopted decisions by that time.
The leaders of the three states discussed the areas of collaboration in detail, alongside possible joint measures to boost trade and  to control monetary-credit and other spheres, to ensure sustainable and mutually beneficial development.

The President of Belarus was pleased to note that vice prime ministers from our three countries have previously conducted efficient meetings, aiming to eradicate problems between our states. Moreover, a whole range of problematic issues has been tackled during presidential bilateral talks between Belarus and Kazakhstan, and between Russia and Kazakhstan.

Mr. Lukashenko added that, at the trilateral meeting, the heads of state focused on economic issues, besides others, since, in 2014 and early 2015, trade turnover fell. “It’s not a good trend; however, the reasons are clear, as we’ve discussed. We’ve outlined possible solutions for these complex issues, which need to be resolved. There’s also a simple formula for raising Union trade turnover: we need to sell our own goods!” said the Belarusian leader.

More than 100 items of legislation are lined up for the EEU in 2015, with a new Customs Code to the fore, governing a common market for electricity, gas, oil and oil products, as well as international treaties regulating currency-financial and socio-economic interaction.

The heads of state have agreed to develop trade-economic and investment interaction, instructing their governments to elaborate measures to support trade growth.

The accession of new members to the Eurasian Economic Union also came under debate. “We’ve confirmed our wish that new members of the Union observe the principles set out by our three countries. We’ve worked hard to create this Union, so new members must observe its existing principles,” underlined Mr. Lukashenko.

The leaders of the three countries additionally noted issues on the political agenda, such as regulation of the situation in Ukraine. Mr. Lukashenko noted, “Our meeting has resulted in a coincidence of positions across most areas of co-operation.”

The heads of state have agreed to continue meeting informally to discuss and to adopt decisions, aiming to respond promptly to any crisis arising. The presidents of Belarus, Kazakhstan and Russia also visited the Library of the First President of Kazakhstan, chatting to young visitors, and Mr. Lukashenko and Mr. Putin were awarded electronic reader tickets.