Minsk has a new tradition: to leave money on the ‘City Scales’ which have recently been installed in the capital’s historical centre, not far from City Hall. The composition reminds us of Minsk’s gaining of the Magdeburg Right in 1499; in line with the law, the City Hall — which hosted city council’s sittings — had to house standards of weight and volume (including a precise clock). 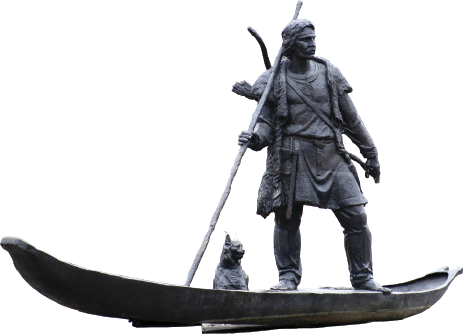 Alexander Prokhorov’s sculpture illustrates a scene from 16th-17th century Minsk life: a merchant is handing a coin to a seller while a third character is checking the weight. Urbanites and tourists love this simple plot and also use their money to place on the ‘City Scales’. Foreigners throw coins and Belarusians, who only have paper money, insert notes into the chain of the scales.

In 2008, a similar sculpture, also authored by Mr. Prokhorov, was erected in Polotsk — The Merchant. The figurine holds a sparkling coin in its hands and passers-by love to rub it, believing that this will bring them fortune.

here are many monuments in Minsk devoted to famous Belarusians. These sculptures and their characters are much cherished. People lay flowers and take schoolchildren to get acquainted with them. Actually, they all aim to generate patriotism in youngsters.

Meanwhile, tourists prefer monuments which arouse a smile or give space for imagination. Really, such a medieval merchant with scales push us thinking not of the Magdeburg Right or its influence on Minsk’s life in the past, but of bread-and-butter money. Some seriously believe that a sculpture is a bank and on leaving coin here, they will find much more at home, as in a fairy-tale.

As for fairy-tales, these also exist; guides have many worthy stories of the kind. For example, Ferdinand and Wilhelmina von Munchausen are buried in Glubokoe. Tourists love to visit their grave as they believe that ‘the very same Munchausen’, known for his incredible adventures in the 18th century Russian Army, rests here. However, few know that Hieronymus Carl Friedrich Baron von Münchhausen, a historical figure and a literary character, was buried in 1979 in his native city of Bodenwerder, in the west of Germany. Meanwhile, the man from Glubokoe (and his wife) died almost a century later: in 1878. However, tourists are not

embarrassed with this fact; they continue believing that the legendary baron truly visited the Belarusian town. As the Deputy Chair of the District Executive Committee, Tatiana Molotovnik, notes, this is to Glubokoe’s advantage, “A legend exists and tourists are attracted by it. We’ve decided to support it as we need guests. Their coming brings money to our budget.” Of course, this is a pragmatic approach but it’s applied all over the world.

To entertain guests, guides sometimes invent their own legends. Taking tourists to the ‘Yunost’ (Youth) fountain, opposite to Minsk’s St. Simeon and Yelena Roman Catholic Church, they advise men and women wishing to find their love to pat the knee of its girl or boy, and then happiness would come. In turn, men (with problems in their love life) are proposed to sit down by a bronze female figurine in the Mikhailovsky Park. They also need to touch its knee for success in love to come. Meanwhile, tourists are mostly attracted by an erotic interpretation of this tradition: the possibility to touch the figurine’s chest. A tourist who took a photo near the ‘Girl with an Umbrella’ sculpture, tells me that such a photo would help him escape the wind which takes happiness and money from his home. Another sculpture — ‘A Smoking Man’ — has its hand sparkling. People love to greet it and offer a cigarette as they believe the day will be lucky then. This might be right, but the luckiest are those smokers who’ve forgotten their cigarettes at home. Trying to remain unnoticed, they take a cigarette from this bronze passer-by…

Some Minsk sculptures are truly inspiring — bringing ease to the heart. One of them is found in the Isle of Tears, near the Troitsky Suburb. A memorial has been unveiled here to honour the memory of Soviet soldiers who were killed in Afghanistan. A

crying angel is in its heart; he is mourning over the men whom he failed to save. Minskers have invented one more mission for the angel — newly wedded couples come to him with a request for their future sons not to take part in any war.

One of the freshest city legends is connected to a sculpture by the Belarusian State Economic University: a bronze student dressed in 16th century clothes holds a book and a roll in his hands. When the sculptor, Pavel Luk, was assembling the figurine, students who were passing by asked him as jokingly whether this ‘student’ helps people pass their exams successfully. The author then answered that it was up to youngsters to decide what part of his sculpture should be rubbed to get luck. Since then, students ask the bronze man for help.

Animals are also addressed for help. A monument to the beaver has been installed in Bobruisk, close to the local market. The bronze sculpture features a 2m beaver, dressed in a frock and a hat. Local residents believe that the one who touches the beaver’s nose or watch chain would obtain luck and wealth.

A bronze figurine of Shura Balaganov, the legendary son of Lieutenant Shmidt, a character of the popular Golden Calf novel by Soviet writers Ilf and Petrov, has been erected, not accidentally, in Bobruisk. The lieutenant’s children were legendary swindlers of the 1920s. As the novel reads, in early spring of 1928, these ‘children’ gathered for a conference to divide the territory of their ‘business’. A dispute broke out which Petrov and Ilf described as follows: ‘Remote eastern regions, sunk in sands, enjoyed a bad reputation. They were

accused of being unfamiliar with Lieutenant Shmidt. “We are not fools!” shrieked Panikovsky. “Give me the Central Russian Uplands and I’ll then sing the convention.” Balaganov exclaimed, “What are you talking about? o you really want the whole uplands? What about Melitopol or Bobrusik then?” As Bobruisk was mentioned, all those present groaned: they were ready to move to Bobruisk immediately. The city was viewed as a wonderful, highly cultural place’. As a gratitude to such compliments, sculptor Yaroslav Borodin cast a bronze Balaganov for the city. It now stands on the junction of Pushkin and Proletarskaya streets.

Really, there are many different monuments. Shklov honours… are you ready for this? …a cucumber! The vegetable, dressed in a jacket and bow-tie, has become the city’s symbol and a legend now actively circulates across the city. Money will come to those who rub the cucumber pouch.

A monument to the sparrow in Baranovichi is a symbol of patriotism. An inscription on its pedestal reads: ‘No remote lands but the Motherland attract a bird of passage’. All Belarusian monuments — including the truly ridiculous — aim to promote the country’s image, irrespective of what they are devoted to. These promote the country’s unique culture, its hospitable people and national humour, all of which are important to progress. New monuments will continue to be erected and, in the course of time, seemingly insignificant things will turn into a beautiful tradition.