In Brussels, Belarus actually has three — no four — diplomatic representations

In Brussels, Belarus actually has three — no four — diplomatic representations: the Embassy in Belgium, two permanent representations (under the EU and NATO), and Belarusian Ambassador Andrei Yevdochenko is accredited as the Ambassador in the Grand Duchy of Luxembourg.

In Brussels, Belarus actually has three — no four — diplomatic representations: the Embassy in Belgium, two permanent representations (under the EU and NATO), and Belarusian Ambassador Andrei Yevdochenko is accredited as the Ambassador in the Grand Duchy of Luxembourg. That’s why he is one of four persons, and our embassy, located on the green, silent and prestigious Avenue Moliere, works under special conditions. 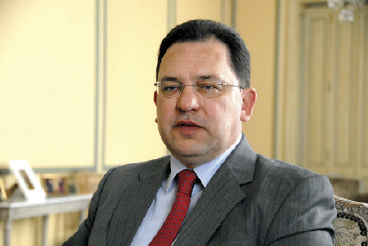 
Diplomacy, as well as money, likes silence. The comparison with money in this case is quite appropriate: the Brussels club of bankers is located in the building of the embassy which, for 20 years, has been the property of Belarus and, having crossed its threshold, you at once appear on the native land. The Ambassador of Belarus, Andrei Yevdochenko, notes the uncommonness of his mission, “Our diplomatic mission, on the range of questions on which we carry on a dialogue with foreign partners, is an unusual phenomenon in Belarusian diplomatic life.” We begin with that peculiarity of our embassy in Brussels. Ambassador Yevdochenko fairly admits that bilateral Belarusian-Belgian relations do not occupy even half of the working time of employees, who have to divide their attention between mutual relations (not only Belarus-Belgium, but also Belarus-Luxemburg), interaction with NATO and the EU (and here our representation in Luxemburg helps us in that, after all the new head of the European Commission, Jean-Claude Juncker, was, for 16 years, Prime Minister of Luxemburg, it means not as formal as a duke, but the actual head of this state), and also co-operation with numerous international organizations such as the World Customs Organization, Eurocontrol (the European Organization for the Safety of Air Navigation), the Energy Charter Treaty and many others.

Nevertheless, our conversation with Ambassador Yevdochenko begins with bilateral Belarusian-Belgian work — in particular, trade and economic relations. Belarusian exports to Belgium have increased over the last six years by almost double to $198m, and for each embassy it is a good occasion for pride.

So what exactly do we deliver to Belgium, what Belarus production is in demand here?

If we take the structure of our export, probably, it will be as traditional as for any country of Europe. There is certain petrochemical production — light products, as we call them: technical lubrications, oils and so on. Naturally, there are deliveries of potash fertilisers. There is a big group of production of woodworking and one specific type of wood deliveries to Belgium is goods with a deep degree of processing delivered here, for example pre-made products like building wooden units, various prefabricated houses, and summer residences. If you go to any specialized shopping centre, you will see that many of these products come from Belarus. We deliver synthetic threads and fibres from Mogilevkhimvolokno, linen fabrics. All the Belarusian exporters deliver berries — we have enterprises which produce cowberry, raspberry, currants and other berries in industrial volumes. Three years ago, we decided to start this business, and today, we have deliveries of this production totalling more than 1m Euros.

The big item is diamond trading. Belgium is a world centre of this trade, and our Kristall Plant in Gomel works well in this market. Unfortunately, our tractors recently left Belgian market. There was a dealer who would purchase small, but regular volumes. But the problem was that this dealer had to contact representations of MTZ based in Germany, in Dresden. Now, as far as I know, exclusive rights for the Belgian market were transferred to other, French, dealer, but we are unable to contact him. So it is a question of, not so much the local market, but the side effects of our own marketing policy.

Speaking about the possibilities of further trade, economic and especially actual investment co-operation, we should not forget about the economic problems which Belgium experiences today and which inevitably affects the investment activity of its businessmen. The most serious of them is the huge external debt exceeding 370bln Euros, more than 100 percent of the annual GDP. The country lives with a tight belt and financial expenses are cut down. Small and average enterprises feel, more than others, the consequence of this crisis. Their share in the economic structure of Belgium totals 99 percent. In this connection, Andrey Yevdochenko says, “Now, for example, the big Ford plant is being closed nowadays. The level of taxation for business in Belgium is one of the highest in the world and both real estate and labour are expensive here. Therefore, of course, Belgian companies attentively search worldwide, where it is possible to withdraw capital in order that it is not unused, but works and makes profit. They look to China and Latin America — the most fast-developing and profitable markets. But they also look at the market of the Eurasian Economic Union — Russia, Kazakhstan and Belarus. They actively work in Russia; basically these are big petrochemical projects. Though, for example, Solvay, one of the largest companies in Belgium, constructed a plant in Russia and receives part of the components necessary for manufacture from Belarus. We, together with the Belgians, make flax harvesters. After all, what attention in our country is given to the flax-growing branch?”

Actually, it is convenient to compare Belarus and Belgium. Its population is slightly larger than Belarusian one (11 million citizens). People here grow basically the same agricultural crops as in Belarus. Flax is just one example, though it is not as easy with flax as that. Earlier, Belgium was famous for flax and fabrics derived from it, but nowadays flax is not grown here, because it is considered a capricious crop. And there is also China and other countries of Asia to consider. Since 2005 Chinese textiles have received quota-free, almost unlimited admission to the market of the European Union. And if you add textiles from Pakistan, Sri Lanka, India and Bangladesh, then it is clear that the Belgians simply cannot compete with Asian countries. But they corrected their strategy in a timely fashion and stopped production of materials, but became the end-manufacturer, producing products of haute couture and high style in small amounts, in order not to create competition for themselves. Belgians win by adapting to the latest requirements of fashion and the highest quality of production. They are aimed at higher group of consumers, who value the exclusivity of their products. Once, we had an idea to follow this way, but as far as I know, but we have not defined our basic strategy in this direction yet. As for flax harvesters, we, together with our Belgian partners, search for entries into the Russian market and we also develop a new joint project - an industrial line for flax processing. I consider it to be a very good direction. Belarus already has three lines of such a type, while the share of localization in them is not less than 30 percent, and it is important.” According to the Ambassador, there are also other interesting projects which can attract Belgian investments: the transformation of Minsk-2 airport into a centre on processing and transhipment of cargo and release of biometric passports. But all of them are at the very first, negotiation stage so therefore, we will withhold details.

What is necessary to note is the insufficient work of the National Agency of Investment and Privatization. “We have serious problems with it,” Ambassador Yevdochenko says. “When we discuss the theme of foreign investments, we always speak about huge projects — transnational companies with big names. But the lion’s share of enterprises in Europe is small to medium in size and they are basically engaged in high technologies — electronics and biotechnologies, for example. Coming to Belarus, a large company can afford expenses for the preparation of analysis of the Belarusian market with a first-class consulting company to get legal support at a first-class consulting company, these are considerable expenses. But what should we do with small and average businesses which cannot afford such expenses? Belarus does not have an agency which would help and accompany that segment of the market which is interested in such business. And that is all. Therefore, the majority of investments remain outside, including the ones in the sphere of biotechnologies. In Belgium, for example, these are basically small and average companies. Even medicines (Belgium is well-known for its pharmaceuticals) are produced in big volumes by small companies. They have a big pharmaceutical cluster which consists of a number of universities working under scientific laboratories of both small and average companies. And new medicines are created in this conglomerate, which is partially financed by the government. And after the new medicine is created, has passed all tests and received all the necessary certificates, the group which created it is allocated and starts to live as a separate private company, producing this physical medicine. The task is to help experts to create a product which then could be introduced at the market and to allocate experts at the stage of reception of the first profit. The state only gives it a start in life. After that, people work independently. Therefore, I again repeat that I consider that for Belarus it is equally important to attract large, average and small-scale businesses which represent, maybe, the most qualified     and technological segment of European business.”