I’ve never been a fan of headwear — either hats or scarves. Even in winter, in the cold, I prefer to go with an uncovered head! However, I recently discovered an unusual linen headdress, called a namitka: beautifully embroidered with geometric motifs. The long piece of fabric takes patience to tie. Some would say that this characteristic is often lacking in young girls, but mandatory for married women and this may explain why the accessory was popular (among Eastern Slavs) only for wives. 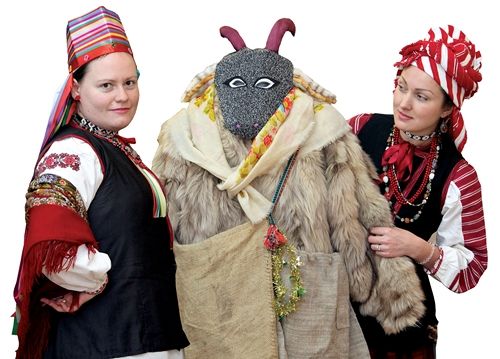 The word ‘namitka’ derives from ‘namstka’ and ‘obmstka’ (winding around the head). Yelena Buko, a researcher at the National Historical Museum of the Republic of Belarus, demonstrates to me exactly how to wear the item, which tends to be 30—40 cm wide and 2-4 m long. They vary not only in length but in their decoration, and must be starched correctly, to remain ‘stiffly’ in position on the head.

Yelena tells me that the Belorusy.by. 20th Century Ethnographic Research in Belarus exhibition, recently hosted by St. Petersburg’s Russian Ethnographic Museum, aroused considerable interest among specialists and ordinary citizens alike. Among the 500 exhibits were traditional Belarusian costumes, utensils and musical instruments — on loan from the National History Museum of the Republic of Belarus. So great were the crowds that a queue formed outside, with people willing to wait their turn rather than leaving in disappointment: a true rarity! 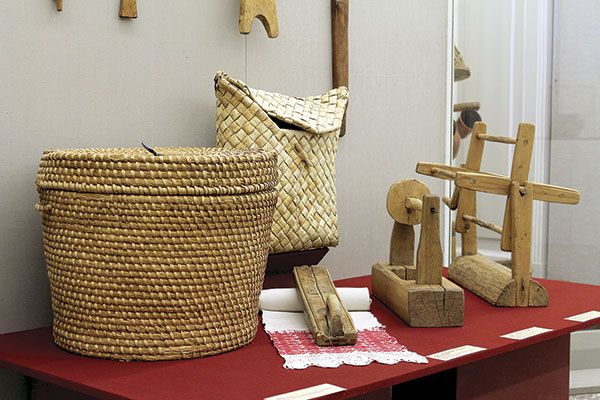 A year ago, the exhibition opened at Minsk’s Ethnographic Museum, initiating long-term co-operation with our neighbours. Maria Kazantseva, who heads a department at the National History Museum, tells us, “Our joint project foresees an exchange of exhibitions, joint workshops and a probation period for experts. Of course, we’ve enjoyed uninterrupted contacts and co-operation for decades. Last year, the Ethnographic Museum loaned us its unique collection of Belarusian costumes from the 1900s; experts from all across Belarus, as well as from Ukraine, came to see it. Our collection originates from the 1920s, with nothing earlier, being much ‘younger’ than that of St. Petersburg. It’s an honour for my colleagues and me to receive an invitation to visit the city on the River Neva as there is so much to learn there. I hope our creative exchanges — of collections and specialists — will increase in regularity.”

You took not only costumes but crockery and musical instruments…

We believe that, to understand others and their traditions, we should know how they lived, what they wore, and which festivals they celebrated. For example, this item, very similar to a violoncello, only smaller, is a basetlya: an old Belarusian bow instrument. It was no less popular than the lyre or cymbals and no village festival was celebrated without it. Almost every region had its own little orchestra. All the musical instruments presented at the exhibition date from the late 19th century and have been restored by our masters. We look after them carefully, since they are considered to be rarities, seldom taking them out of their display cases. Bringing them to St. Petersburg has been an exception. 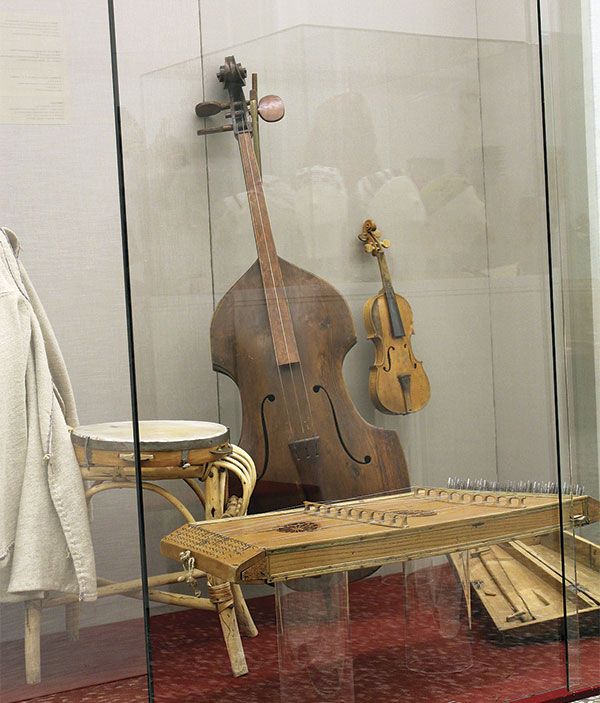 Similar to a violoncello, the basetlya is an old  Belarusian bow instrument

Observing the basetlya, and a costume from Brest Region’s Ivatsevichi, I can’t help but think of early summer days, when the Earth awakens and merry life-affirming dancing takes place in village squares. Looking around me, there is a group of girls also studying the artefacts, and they certainly aren’t local, going by their clothes.

“Every Belarusian region had a distinctive style, with unique ornamentation and colouring,” Ms. Buko explains. Belarusian motifs tended to be geometric (unlike Russian floral themes). Cross stitched stars and rosettes appear regularly but designs differ greatly between Gomel, Brest and Mogilev Regions. Even within a region, you’d find variation. If a young man married a woman from a neighbouring village, she’d be immediately recognisable in her new home by the embroidery on her clothes. Self-identification is very important, inspiring a sense of national culture.”

From what fabrics were costumes sewn, Yelena?

Weaving was by hand, usually from flax but later cotton; we have both in our collection. There was a great variety in headdresses too. Namitkis could be curled up, giving a majestic appearance. Women stepped majestically, like peahens!

Yelena Buko graduated from the Belarusian State University three years ago, and tells us that she can sew traditional costumes and namitkis herself, although it’s quite time consuming. “However, I always manage to finish successfully,” she smiles.