How can we best pay tribute to those who sacrificed their lives on the altar of independence for their country? 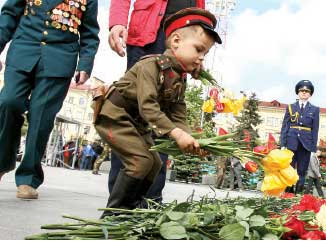 How can we best pay tribute to those who sacrificed their lives on the altar of independence for their country? Perhaps the most important aspect is to keep alive the memory of the self-sacrifice of our fathers and grandfathers. Our children, grandchildren and future generations should know the price of their freedom.

70 years have passed since Belarus’ liberation from the Nazi invaders. The 80th, 90th and 100th anniversaries are yet to come. However, those jubilees are unlikely to be graced by veterans in person. Today, we can still show our gratitude face to face. The celebration will feature a solemn parade and a festive procession on July 3rd, as well as speeches and a salute. This issue’s theme is ’70 Years of Liberation. We Remember…’

Bagration Starts Here is also quite interesting; the legendary operation launched from the Belarusian marshes on June 23rd-24th, 1944. It was not simply strategically successful; it was victorious and marked the starting point for Belarus’ (and, later, Europe’s) prompt liberation. During WWII, the Fascist Wehrmacht noted: ‘The smashing of the Tsentr (Centre) group of armies in Belorussiya meant a catastrophe even greater than that of Stalingrad’. However, until recently, no monument stood on the site where the Soviet troops began their victorious path to Berlin. Now, seven decades on, a memorial is planned to mark Operation Bagration and the efforts of all involved.

Heroes Never Die explains: ‘The Red Army’s Operation Bagration began in the morning of June 23rd, 1944, in the Vitebsk Region. Sappers, under the command of Mitrofan Pitenin, worked to clear a path through the enemy’s minefields. In the spring of 1944, Pitenin worked with his comrades, in southwest Vitebsk, to demine the enemy’s battle zone. When fighting began against the enemy’s diversionary detachment, the fearless fighter killed over ten Germans, using a trophy machine gun, for which Corporal Pitenin was awarded a 1st class Order of Glory, becoming the first full cavalier of the Order of Glory of all three classes. However, the brave soldier was not fated to receive the top award, or to celebrate Victory Day. On June 3rd, 1944, he was fatally wounded during battle and died the same day. He is buried in the military cemetery in the Liozno Region’s Star village, in the Vitebsk Region. On the 70th anniversary of Mitrofan Pitenin’s death, a memorial plaque has been unveiled on the site and a rally held in his honour, attended by his relatives from the Ryazan Region of Russia.’

Liberation was earned at the expense of many lives. Those heroes accomplished a deed of true heroism — such as we shall never forget. Their memory remains forever, reflected in the flowers laid at numerous monuments and memorials across Belarus, located both in large cities and small villages. The new Museum of Great Patriotic War History is also a tribute to their memory, embodying the brave deeds of 70 years ago. Time will never reduce the significance of their achievement and passing years cannot deface their legacy.