Alexander Lukashenko recently made a working visit to the United Arab Emirates, including negotiations with the UAE`s top leadership. Priority areas of bilateral co-operation were discussed, dealing with trade-economic and credit-investment spheres, including prospects for joint implementation of projects in third countries.

A range of agreements in trade-economic, credit-investment and sci-tech spheres were previously reached and their fulfilment will enable us to significantly increase trade turnover between our two states, while ensuring realisation of projects in Belarus involving Emirati capital. 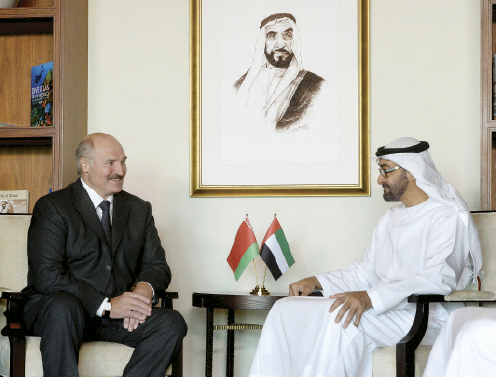 
In the context of previously signed contracts for the supply of automobiles, there are plans to set up a MAZ dealership in the UAE, including a technical maintenance station, a warehouse of spare parts and a permanently operating retailer of automobile machinery.

Negotiations have been held with an Emirati investor who is keen to set up a production-industrial cluster at the Great Stone Industrial Park (worth $170m). Conditions have also been determined to attract funds from the Abu Dhabi Development Fund, for the implementation of long-term infrastructure projects in Belarus.

Belarusian organisations involved in space research have also conducted negotiations with the Emirates Institution for Advanced Science and Technology and the UAE Space Agency, aiming to establish collaboration in the sphere of space research.

Moreover, events have been agreed aiming to prepare and organise a joint Belarusian-Emirati scientific symposium and an exhibition of the sci-tech potential of Belarus in Abu Dhabi in December.

Belarus attaches great importance to the development of co-operation with the United Arab Emirates and sees significant potential for its expansion, as was noted during a meeting between Alexander Lukashenko and the Crown Prince of Abu Dhabi, the Deputy Supreme Commander of the UAE Armed Forces, Sheikh Mohammed bin Zayed Al Nahyan.

During a working visit to the UAE President of Belarus Alexander Lukashenko met with the Crown Prince of Abu Dhabi, the Deputy Supreme Commander of the UAE Armed Forces, Sheikh Mohammed bin Zayed Al Nahyan.

The meeting lasted over two hours, allowing discussion of current projects and the outlining of tasks for the near future.

Alexander Lukashenko and Sheikh Mohammed bin Zayed Al Nahyan gave instructions for 3-4 key projects, aiming to promote relations between our two countries to a new level. Both praised the results of the second session of the joint committee on co-operation between the Government of the Republic of Belarus and the Government of the United Arab Emirates.

The UAE is the main trade partner of Belarus among Arab states in the Persian Gulf, with Belarus exporting car and tractor parts, tobacco products, synthetic fibres, engines and power supply units, as well as potash fertilisers, bearings, trailers and semitrailers. As of 2013, 14 organisations with UAE capital were operational in Belarus, involving $54m of UAE investment.

Belarus and the UAE have a high level of political interaction, sharing similar positions on key issues within the UN agenda.

Mr. Lukashenko’s meeting with the Deputy Prime Minister and Minister of the Interior of the UAE, Sheikh Saif bin Zayed Al Nahyan, touched on the UAE’s eagerness to attract qualified specialists from Belarus. The Head of State noted his productive meeting with the Crown Prince of Abu Dhabi, the Deputy Supreme Commander of the UAE Armed Forces, Sheikh Mohammed bin Zayed Al Nahyan. He explained, “We agreed on many things and have new ideas on how to improve our economic relations and relations between people.” He added that Belarus is ready to provide specialists to work in the UAE.

In his turn, Sheikh Saif bin Zayed Al Nahyan noted that Belarus has advanced industry and education, making the engagement of the Belarusian workforce a major aspect of bilateral collaboration.

“All industries, particularly manufacturing, agriculture, social sector and high-tech industry, are well developed in Belarus,” stressed the President. “The only thing that Belarus lacks is resources and, to a certain extent, investment — both of which are abundant in the UAE. Therefore, we need to join efforts for the benefit of our two states.”

The meeting also focused on liaisons in the sphere of law enforcement, as our law enforcement bodies have been working together since 2005. The committee on co-operation with Belarus was established at the UAE Ministry of the Interior last year, with Emirati specialists attending short courses at the Belarusian Interior Ministry Academy.

Trade between Belarus and the UAE is expected to reach $500m in 2015, encouraging further co-operation, as noted by the President of Belarus, during his meeting with the Deputy National Security Advisor of the UAE, Sheikh Tahnoun bin Zayed Al Nahyan.

The President stressed that, upon his return to Belarus, he would instruct the Government to draft a list of products in demand in the UAE, in order to boost bilateral trade to $500 million next year. “We’d like the Emirati side to do the same,” said the Belarusian leader.

“We must reach this level of bilateral trade, in order to create the foundation and economic platform for further co-operation. We can do anything you need from us, and you have what we need. It would be great to join efforts, expanding and enhancing our economic and security relations, among others,” noted the Head of State.

Mr. Lukashenko stressed that he desires to see top level agreements implemented effectively and as soon as possible. He promised to instruct the Belarusian Government accordingly, saying, “I`d like you, as a person who supervises relations between Belarus and the UAE, to do the same. Then, we`ll be able to advance our co-operation to the highest level. We very much hope that our intensive exchanges of visits at top level and at the level of ministers and other officials will promote progress in our relations.”

Sheikh Tahnoun bin Zayed Al Nahyan remarked that Sheikh Mohammed bin Zayed Al Nahyan was satisfied with his meeting with the Belarusian President and was impressed by the openness of their dialogue. “I think that our relations saw a certain breakthrough,” underlined the Deputy National Security Advisor of the UAE, adding that the Emirati side had worked hard on the agreements.

“As far as I can see, we’ve managed to convince our UAE partners that we have serious intentions and are eager to build long-term relations,” summed up Mr. Lukashenko. His visit included a tour of the Sheikh Zayed Grand Mosque, to honour the memory of the first President of the UAE, Sheikh Zayed bin Sultan Al Nahyan.


CSTO challenges at next session meeting 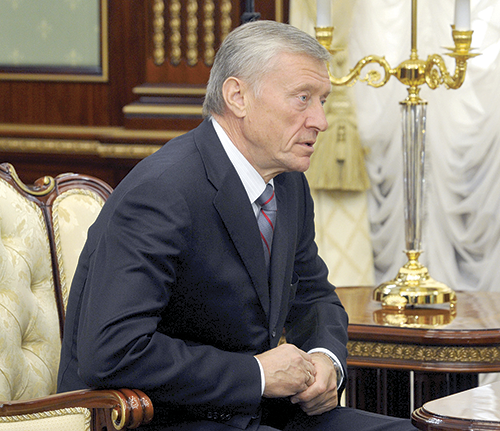 
The Secretary General of the CSTO, Nikolai Bordyuzha, recently met President Lukashenko to discuss preparations for the next meeting of the CSTO Collective Security Council. Mr. Lukashenko is keen to focus on security issues raised during his recent negotiations with the United Arab Emirates leadership. He noted, “I understand that the situation there is far from stable. Egypt and Libya especially have problems, and not all is right with the ‘Islamic State’. There is war across the East. Look at the situation near our borders; who would have thought that Ukraine would face such a conflict...”

“Our safety is of paramount importance; we in Belarus watch everything occurring near (and far from) our borders with care. We operate in this direction, supporting our friends within the CSTO as much as we can, and paying close attention to the defence of our own borders, including working with the Russian Federation on the western zone of our responsibility.”

Nikolai Bordyuzha believes that the next CSTO Council meeting will face some challenging questions. He notes, “If to estimate the general realm of Treaty activity, there are several disturbing factors — foremost Afghanistan.” The situation there is now at its worst, according to Mr. Bordyuzha