2015 declared Year of Youth in Belarus

2015 declared Year of Youth in Belarus. The Deputy Chairman of the Standing Commission on Human Rights, National Relations and Mass Media of the House of Representatives of the National Assembly of Belarus, Oksana Nekhaichik, notes this year’s focus on youth projects, and summarises the results of the state’s youth policy of the last twenty years. 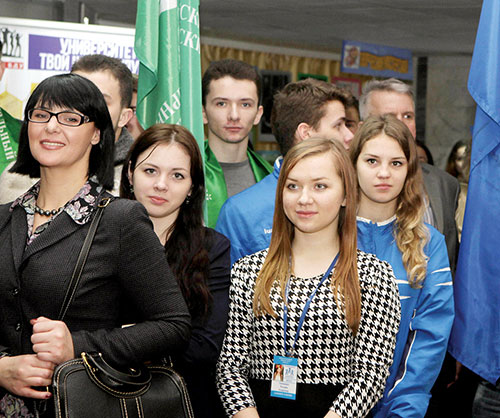 The Law of Belarus ‘On the Basis of State Youth Policy’ comprises 40 Presidential decrees and more than 100 Governmental enactments. The state has been creating conditions for effective education, and professional growth, as well as spiritual and moral development, so that each citizen can reach their full potential.

Secondary and higher education are free, and young experts are guaranteed their first place of employment. At the instruction of the President, a modern Student Village has been built, sited in one of the most picturesque Minsk suburbs, near a metro station, housing tens of thousands of young people. The site has largely solved problems of lack of hostel rooms.

The state also supports young families in building their own homes, with most emphasis on young families raising children: the state covers part of the cost of loans for such building. Meanwhile, where a parent is taking child-care leave and the child is under 3 years old, credit payments can be deferred. Since January of this year, as in Russia, the Big Family project has begun.

Talented youngsters are being supported through the Special Presidential Fund, across all spheres - from science and art to sports. A number of awards exist and there are various regional and national competitions. The state has been developing a system of out-of-school education, including creativity centres, and musical and art schools, in which hundreds of thousands of children study.

Meanwhile, the Belarusian Republican Youth Union has been making a major contribution to patriotic education. Last year, it received the Presidential award ‘For Spiritual Revival’. All those interested are welcome to put forward ideas for programmes at their own school or institution of higher education. They must then defend their proposal during public debate, before the idea is voted upon.

In particular, in my constituency, in Zavodskoy District of Minsk, young people have assisted in building a fitness centre in one of the micro-districts. City authorities have supported the initiative and building has begun.
Today’s young people understand that our future depends on individual contributions for the greater good, and a desire to improve oneself — to develop and learn. Results will soon be evident.

In this Year of Youth, we should analyse our youth policy, accumulating new ideas and embodying them within new projects. 2015 is also the 70th anniversary of the Great Victory, reminding us that the hopes of future generations depend upon what we achieve today.


Relay race of the generations

2015 is the Year of Youth, aiming to promote trust in our young citizens and offering more opportunities than ever for taking part in social events, bringing our young men and women satisfying experiences. Innovative ideas are welcomed, doors are ready to be opened and even the most ambitious plans may be accommodated.

The older generation would once lament: ‘If only the young of today knew...’ However, we can easily argue that today’s young people know rather a great deal! They’ve enjoyed Olympic sporting success, and have a host of scientific achievements, including helping create a satellite, and build our first nuclear power station. In fact, they’ve contributed to all socially significant campaigns: from building the National Library to volunteering at the Ice Hockey World Championship. They take an active part in encouraging citizens to enjoy a healthy lifestyle and support the development of tourism. With so much energy, the possibilities are boundless.

The state reciprocates young people`s feelings, having encouraged open and creative dialogue between generations for three decades. Every town, big and small, has a host of facilities to support youngsters, encouraging their creativity. Yet, those aged 14 to 31 years comprise under a quarter of the population (just 24 percent). They account for 36 percent of able-bodied residents.


Delegates of the Congress

Thanks to Youth Day, which is held during the International Slavianski Bazaar in Vitebsk Arts Festival, we have many friends countrywide. We’ll meet at the Congress, discussing our common problems, as well as sharing ideas on interesting projects. For example, we’re going to hold street sports competitions, to promote healthy living. Last year, we acquired the region’s first specialised platform for ‘street sports’ and are happy to invite colleagues and friends to attend.

The Gomel delegation’s main project aims to set up a Republican Help Centre for veterans, disabled people, and all those who need support. While participating in various events, we often receive offers of help: for instance, people wishing to donate toys to children`s homes or make a financial contribution to surgeries. An electronic database will aid in matching such offers to recipients.