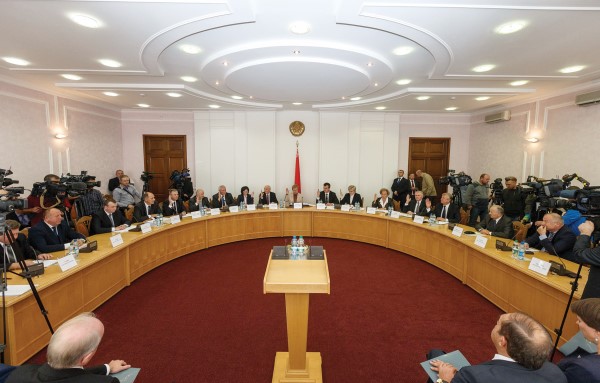 The autumn weather was unusually sunny and the meeting hall on the second floor of the Government House was crowded. National and international observers and journalists were in attendance, but the ‘stars’ were the participants of the Presidential campaign and their representatives. The Central Election Commission studied a range of issues during the run up to registration of the candidates.  The procedure met the legislation in every respect: initially, the Central Commission received reports by the regional election commissions on the results of signature collection. The process lasted for over an hour and the official information made interesting reading.

After detailed analysis, the registration of  Victor Tereshchenko and Zhanna Romanovskaya was refused. The latter’s campaign group collected just 789 signatures (against the required minimum of 100,000). Tatiana Korotkevich became the first registered candidate. Her team collected over 107,000 signatures, with almost 105,000 of them confirmed. The first woman in the history of the Belarusian Presidential campaign does not think this is exclusively the result of her own personality. “This has happened because of the work of my team, as well as those who signed in my favour. My candidacy is the single democratic alternative. The authority should change but peacefully," she said.

The second certification went to Sergei Gaidukevich who collected over 139,000 signatures. He commented, “I stand for strong, democratic, independent and calm country. I wish for peace and that its citizens enjoy worthy salaries and pensions. I’m for Belarus!” Nikolay Ulakhovich was the third to be registered, with 149,000 signatures. On receiving his certificate, the candidate said, “I’m participating in this important campaign for the first time. However, I view myself as a strong economy expert as have worked in many areas. I hope I can bring my experience to benefit my country. We`ll overcome the economic crisis jointly.”

Alexander Lukashenko’s certificate was handed to the head of his campaign group, Mikhail Orda. Who commented, “Our initiative group worked everywhere — in large cities and small villages. While collecting signatures, we became convinced that people are not indifferent to elections. They clearly understand that, these days, the country’s fate is being decided upon. As a result, our candidate enjoys unprecedented support by the people.”

Four candidates officially begin the pre-election fight. The campaign period has begun and the contenders will have the opportunity to publicise their manifestos widely. Apart from publishing them in state media, the candidates will be able to appear on the Belarus 1 TV Channel free of charge: from September 14th-25th at 7-8pm. Moreover, the candidates will also have access to radio broadcasting to present their programmes; the most ‘popular’ slots will be provided: from 6.10-7.10am from September 21st-October 2nd (working days). The most ‘spectacular’ action is scheduled for October 3rd: TV debates.

The Central Election Committee has approved the form and the number of ballot papers. Their text will be written in Belarusian, with the family names of the candidates placed in alphabetical order. An ‘A — Against All Candidates’ option will also be in place. The ballot paper will be of 207х298 mm size and a total of 7,285,000 will be printed (4.5 percent will be spare).