The Forest Institute was founded on the basis of the Institute of Agriculture and Forest Economy, established in 1927.

When the Forest Institute of the National Academy of Sciences is mentioned, everyone immediately assumes that the discussion will focus on protecting forests against radiation, on breeding ecologically friendly mushrooms and genetically engineered trees and on the development of ancient eco-routes. The Institute’s location in Gomel is no accident, since the majority of Belarusian forests are located there, in the South-East of the country.

The Institute’s director, agricultural scientist Alexander Kovalevich, reveals that the Forest Institute was founded on the basis of the Institute of Agriculture and Forest Economy, established in 1927. Initially, it focused on biological experiments and problem-solving related to forest industry. In the post-war period, its main aim was to restore the Belarusian forests, which in 1946 covered only 21 percent of the country. This figure has now almost doubled. Over time, the Institute has taken on various roles, but the Chernobyl nuclear disaster proved to  be a turning point in its history, reflected throughout the country. 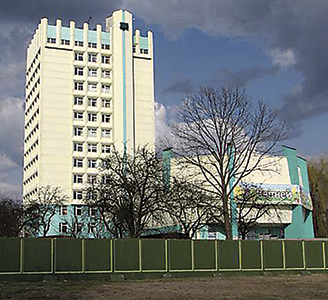 As a result of the reactor explosion, some forests in the Mogilev and Gomel regions were designated as zones of enhanced radiation risk. Following the tragedy, the majority of work done by the Institute was in response to resulting ecological issues. In the decades since the disaster, Belarusian scientists have gained valuable experience in reducing its radioactive impact. Dozens of new technologies and devices have been developed and many patents have been issued. The director points out that the need to protect forests and villages has itself forced the Institute into a new direction. At presetnt, the experimental station at Korenevskaya produces plantations of highbush blueberries containing biologically active substances that help prevent cancer. Moreover, the Institute’s scientists have established a new branch focused on growing Hiratake and Shiitake mushrooms. The staff at the laboratory of forest food production speak enthusiastically about the new project. Scientist Ms. Fomina has established the first Belarusian centre to cultivate healing shiitake mushrooms (their properties are revered in the Far East). The project has spread beyond the Institute to other laboratories and workshops, because of the popularity of the health benefits of this mushroom. The Hiratake mushroom has more health properties than other edible fungi, containing proteins, fats, carbohydrates, vitamins and minerals  such as potassium, phosphorus, calcium and iron. Its mushroom protein is similar to that of egg protein and it may help prevent cancer and reduce cholesterol levels. These mushrooms contain bio-elements that may enhance resistance to radionuclides of an organism.

The Belarusian Forest Institute has often been acknowledged as the best scientific centre in the CIS — primarily owing to its scientific developments in the field of genetics and selection. Few other places, with the exception of the Gomel Institute, attempted such studies during Soviet times.

Scientists are now working on a range of tasks, including commissions from other states. In Kazakhstan, for example, this includes the planting of black Saksaul and Sommon Pine at the bottom of the Aral Sea and in the Semipalatinsk nuclear area. Local conditions for the growth of new forests are hostile, since the soil is acidic and lacks moisture; meanwhile, the Semipalatinsk polygon is contaminated with radioactive particles. With this in mind, scientists have been applying the newest seed pelleting technology: seeds are covered with a special husk to increase their survival rate in the first few days, while they are adapting to a new, aggressive environment. This husk has been developed at the National Academy of Sciences of Belarus and the technology has been tested in our country for planting forests in areas contaminated with radioactive substances.

Genetic engineering is another promising direction, with the Institute’s laboratory of genetics and biotechnologies occupying a leading position in the world. A joint project with Russian Institute of Bioorganic Chemistry (to breed transgenic plants) is among the latest projects, resulting in the development and growth of transgenic birches. The laboratory staff admit that such plants were never intended to be grown outside the Institute, but merely within the scope of an experimental and developmental project. This is necessary to allow genetic research to expand and to keep up to date with global developments. Accordingly, co-operation with the Russian Institute is primarily connected with the establishment of their plant-cloning centre. Whilst we have much to learn from this, our work on tree cloning and genetic modifications puts us at the forefront of forestry developments. Specialists are now involved in the breeding of a transgenic triploid birches, but are keen to stress that the work is for the purposes of scientific research only and is not part of a plan to infiltrate the natural forest with these hybrid trees.

The laboratory is currently engaged in several important projects: genetic engineering of seeds; a detailed registration of Oak woods is almost complete; and new detection methods for pathogenic wood infections are in development. A national bank of pathogenic infections is being set up, uniting around 110 genetic passports (15 of them detected for the first time); these have been sent to the New York International Biotechnological Center. 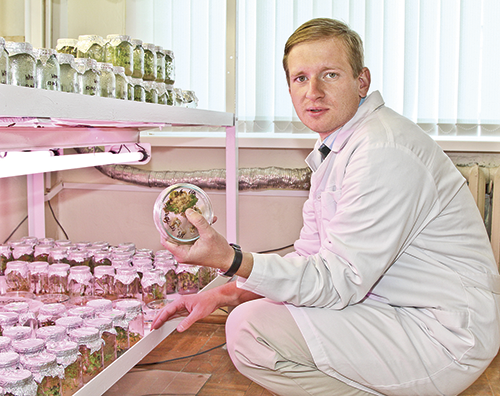 Dmitry Kulagin, research worker at the laboratory of genetics and biotechnologies of the Forest Institute

Forest experts are keen to share their knowledge while eco-tourism routes help spread public awareness. Specialists at the Institute’s Department of Forest Management and Use reflect positively on the lack of mountain or coastal landscape in Belarus, saying, “Of course, we would all love to visit an exotic place, but few realise that our country is one of the few places on the planet where the forests are growing quicker than people are cutting them.” As a result, Belarusian forests enjoy a rich variety of flora and fauna, and an abundance of natural fresh springs, rivers and lakes. Experts are convinced that the Gomel Region is a wonderful place for winter recreation, being largely unspoilt and quiet: it is perfect for nature lovers. The Forest Institute has developed over 30 ecological routes for those who enjoy sightseeing, landscape photography, horse riding and hiking, as well as cycling and water sports. In addition, all the routes offer historical and natural sights.

19th century mansions have been well preserved in Belarus, alongside with military fortifications from WWI times. Historical information from oral histories and archives help guides present the wealth of historical anecdotes and facts to visitors. The use of the ‘Stalin line’ during the Great Patriotic War (1941-1945) is well-known but few are aware of the ‘Voroshilov line’, that passed through the Gomel Region (where the fortification system has been preserved). Our famous Turov crosses, which appear to sprout from the earth, are also popular with tourists.

Tourist services are exemplary, with ranger lodges at each forest site offering comfortable accommodation all year round: they are especially popular during the hunting season. In the winter, families who come for the weekend or longer an enjoy driving a new Canadian snowmobile (available at each forestry) or horse sledges, cook on an open fire, fish on ice-covered lakes or simply admire the beauty of the unspoilt landscape. Each Belarusian forest is unique: some are known for their flora, some — for  their historical sites, while others keep wild animals in open-air enclosures. The staff at the Gomel Institute are confident that in their forest there is something for everyone. 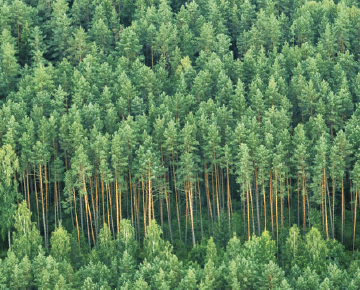