Labyrinth-2 artistic exhibition opens at Republican exhibition gallery, inside the Palace of Arts

Labyrinth-2 artistic exhibition opens at Republican exhibition gallery, inside the Palace of Arts. The project was launched last year by the painting section of the Belarusian Union of Artists, enabling our theatre set designers and animators to present their best works to a wide public, and showing behind-the-scenes set creation for theatrical performances and films. 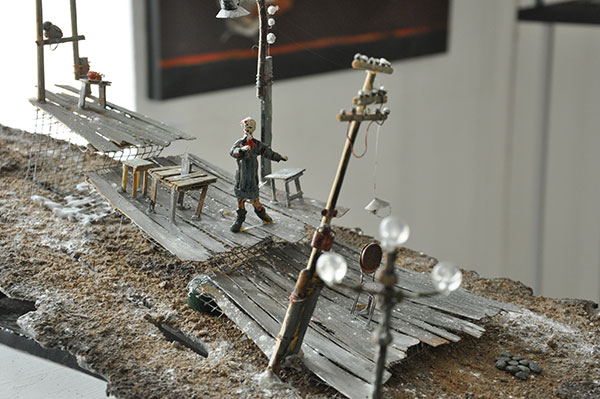 ВThe exclusive exhibition was last held in Minsk twelve years ago, it being far from easy to gather together a great many scale models of various performances, cinema and television programmes. It requires big organisational and time expenditures. Artists and stage designers never have enough time to spend it for the creative promotion in the form of an exhibition, being daily devoted to their creative public duties. Moreover, transporting exhibits is a challenge, as is their assembly. Other reasons may also exist, so such projects aren’t held often. Nevertheless, 29 people participated in the Republican exhibition this year: an impressive number. Alla Sorokina, Head Artist of the National Academic Drama Theatre named after Maxim Gorky, and curator of the vernisage, was delighted by the response.

The opening began with official speeches which tackled such talents as Irina Demina, the author of the Different I exhibition of wooden scarecrows. Dressed in leather cloaks, they are sewn as if hastily, using multi-coloured threads and various leather pieces; they conjure a strange response, inspiring us to reflect on our perception of our own nature and how others see us. Though our big need is the desire to learn about ourselves through others’ opinion, personal self-esteem is also very important. Meanwhile, it often happens that it doesn’t coincide with other people’s opinions, so the artist has invented ‘polar’ costumes for her creations. While the front of each scarecrow is smartly presented, the back is torn and gloomy, in symbolic fashion. I was deeply impressed by this approach. At once, we realise that many wear masks of external well-being to hide their sorrow, anger or anxiety. She explains, “Your social status is unimportant. Even while ‘frightening off crows’ you may remain internally happy.” It’s difficult to argue with this assumption. 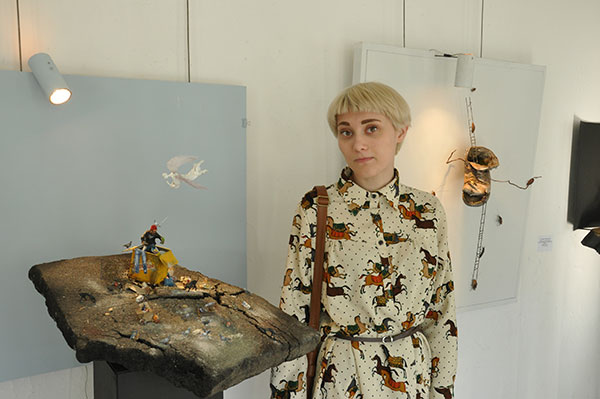 Yekaterina Shimanovich, a third year student at the Department of Decoration and Theatrical Painting, at the Academy of Arts, a future set designer

Taras Porozhnyak, an Honoured Figure of Arts of Belarus and the most honourable member of the Union of Artists of Belarus, has headed the department of ceramics and glass at Minsk’s Theatre and Art Institute (now, the Academy of Arts) for 30 years. Despite being aged 95, he remains full of determination and irrepressible creative energy. He finished his speech by declaring his love for young people, as if defying the ‘protocol’ of reserve on such occasions. As he spoke, the hall was lit suddenly by a bright beam of sunlight through the window: an unexpected moment which received great applause.

In other exhibition hall, theatrical scale models are on show, entitled Scale 1:25. Leonid Khobotov, the Deputy Chairman for Exhibition Activity, reminds us that only a fine line exists between monumental art and painting and that of film and theatre. Using modern technologies, the possibilities are truly exciting, with digital animation now leading the way, conquering paths thought impossible a decade ago. 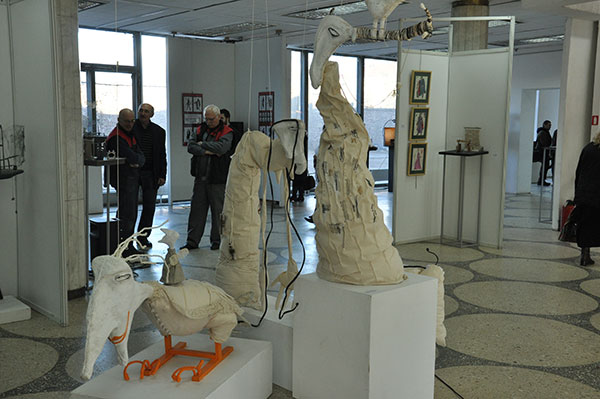 Ms. Sorokina notes that our set designers show their worth with dignity on the international stage, glorifying the domestic art school abroad. She mentions Lyudmila Skitovich, who designed the set for the Magdeburg Puppet Theatre’s Snow Queen (Germany), which remains in the theatre’s repertoire. Most set designers work away from the public eye, without much ‘recognition’ yet their work is vital to the reputation of a theatre and the enjoyment of a performance. We can hardly imagine the level of stage design in the country’s theatres, so the value of such exhibitions as Labirynth-2 is very high, allowing us to see the details of the performances so loved today in the theatres of Belarus. 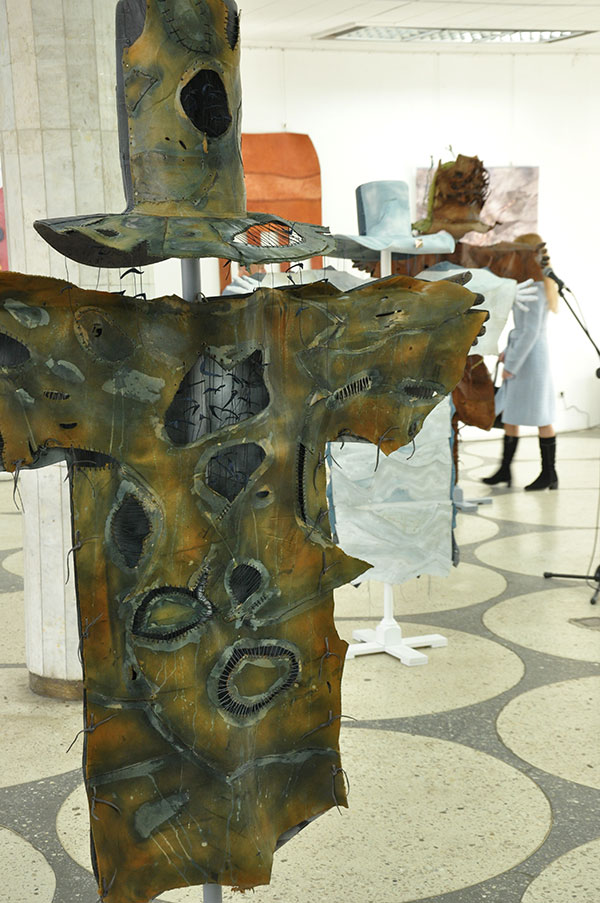 Yekaterina Shimanovich, who created one of the scale models, is a third year student at the Department of Decoration and Theatrical Painting, at the Academy of Arts. Three years ago, Katya won the 7th CIS Open Youth Delphic Games, under the Energy of Youth programme, in Astana. She is pleased to recollect how she has been awarded a gold medal while showing me her models. Examining them, I ask her how she created her metal cockroaches for Guests and she describes the soldering process, which enabled her to bend their short ‘moustaches’. It would have never occurred to me how much skill and talent is involved! Katya has studied under Professor Boris Gerlovan, the famous set designer of the Yanka Kupala National Academic Theatre. The Honoured Figure of Arts of Belarus has taught five generations of artists, leaving a whole constellation of professionals behind him. Among them are names well-known both at home and abroad, including the ‘next generation’, such as Katya. She speaks of Prof. Gerlovan with delight, believing him to be her driving influence. Her dearest wish is to work in theatre or cinema and it seems likely that her plans will see fruition, since she is already making a name for herself. 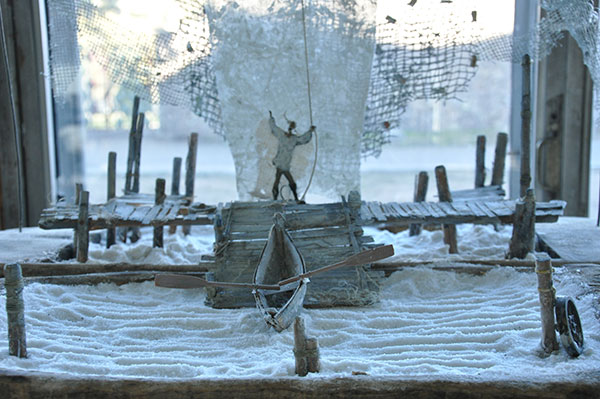 After congratulating the authors of the exhibits, guests at the launch dispersed to examine all that is on show, and a pleasant atmosphere reigned, punctuated by exclamations of delight and the murmur of discussion. It was extremely interesting to watch the visitors: some silently exulted, while others expressed their emotions more vocally and asked authors questions.

Do we need scenery?

Set designers work jointly with producers to ensure that every performance is of a high standard. As soon as the curtain rises, audiences’ first impression is formed from the appearance of the stage: before they see actors or hear the early strains of music. If no curtain is present, they have even longer to absorb the atmosphere created by the set. What if there’re no decorations on the stage? 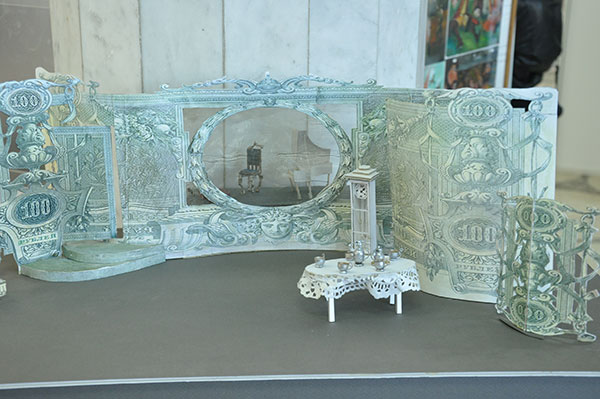 Of course, some directors prefer a bare stage, with nothing to distract attention from the actors’ performance. Kiev’s Theatre Without Scenery is a case in point. I’m aware that the so called ‘black square’, when spectators see the bare stage, doesn’t go out of fashion either. Meanwhile, there’re so many opportunities for stage decoration today: contemporary new technologies which are rapidly developing and different plastic materials, which are successfully used to replace bulky wood and metal, making set changes easier. For example, the set for Rimsky-Korsakov’s Tsar’s Bride by the Head Artist of the Bolshoi Theatre, Alexander Kostyuchenko, used light-weight and ultra-modern plastic to create Ivan the Terrible’s towers, although they appeared to be made of heavy timber.

Mixing genres is currently in vogue, and ‘tricks’ with fire, water and light are popular but simple choices can be effective, with actors wearing ‘everyday’ costumes. A few years ago, the Russian Academic Youth Theatre impressed spectators with its experimental staging for children: Rudyard Kipling’s The Cat Who Walked By Himself, directed by Norwegian Sigrid Strøm Reibo. Youngsters were invited to share their ideas on how the actors should behave on stage. The cast sat on a rug, with no props other than a blanket and five small lamps. Nevertheless, the staging was nominated for a Golden Mask Award in 2011. Few would argue against helping audiences feel more involved, aiding their connection with modern theatre.

Belarusian Dmitry Bogoslovsky’s Quiet Rustle of Leaving Steps, at the Belarusian Drama Theatre in Minsk, is another show to have used minimal staging. Produced by Alena Igrusha, a laureate of the First National Theatre Award, used no more than a plate-glass window, a bench and a few chairs. In some cases, simple staging can lend more depth.

In contrast, Alexander Kostyuchenko’s elaborate set for Shakespeare’s Taming of the Shrew, at the National Academic Drama Theatre named after Maxim Gorky (usually called the Russian Theatre) is infinitely fitting. Katarina, played by Veronika Plyashkevich, transforms the stage with her dress alone: an ocean of scarlet, created by costumiers Tatiana Lisavenko and Nina Gurlo. The vivacious use of bright colours embodies the power of human passions.

Regardless of whether the theatrical stage is empty or full with artistic devices, the quality of the performance always carries the day: its ability to touch our soul. As long as the set manages to intrigue us, all is well. In this case it would be appropriate to repeat the commonly known fact which also suits decorations in theatres: all styles are good except for boring.

Watching visitors to the exhibition, it’s clear that some exhibits inspire people to stand long, in contemplation, and to return for a second look. It can be surprising how certain images conjure our thought-processes. Here I see an apple: such as that found in the Garden of Eden. Upon its skin run insects unpleasant in appearance. Why did the artist place them there? I don’t want to leave the exhibit. In thinking of the ‘Fall’, I turn to contemplating the nature of good and evil, errors and their correction.

Another picture depicts a person running on a red circle, between sky and earth, forever returning to where they began: all in life comes full circle.

The theatrical models are captured scenes, containing a fragment of life in their metre square box. I am a guest from another world, which makes me feel almost all-powerful. The scale of their problems is visible to me, so that I can view with omnipotence. Perhaps, the Almighty also quietly laughs, observing our small tragedies in which we often see a true catastrophe?

It seems to me that this unobtrusive, silent art form has the power to make us feel wiser and, even, happier. At least it has this influence over me. I have seen different sides of human life expressed within these models and leave the exhibition saturated in quiet spiritual pleasure. I hope that this state of mind will never leave me. 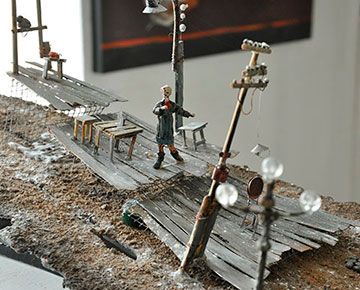