The Embassy of Italy to Belarus has premiered an Italian-Belarusian theatrical project — Viva Comedia — as part of cultural events marking Italy’s presidency of the EU. The performance is based on that of the same name staged by Verona director Matteo Spiazzi, written by playwright Riccardo Pippa with support from the Italian Embassy to Minsk and the Gorky Theatre. Masks for the performance were produced by Italian master Roberto Macci. 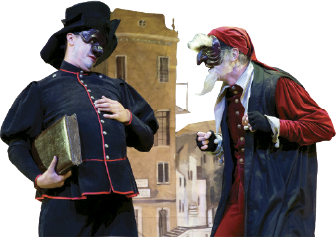 
The ‘commedia dell`arte’ genre uses masks to allow actors to take on their roles: limiting facial expression but dictating manners of speech, movement and gesture to bring each character to life. This inspires a different acting method of course.

Comedia dell’arte always uses certain, recognizable characters, although their number varies depending on local customs and audiences’ preferences, as well as actors’ inventiveness. Minsk show features two men (Pantalone and Graciano) and two servants (often called Zanni — deriving from Venetian Giovanni — Zan). In addition, there are lovers and the Captain.

Comedia dell’arte permits great use of the imagination by performers, allowing them to demonstrate their professional skills and experiment with new roles. Our young and talented actors have used this opportunity to the full: Honoured Artiste of Belarus Sergey Chekeres is joined by Sergey Prokopovich, Andrey Senkin, Sergey Zhbankov, Veronika Plyashkevich, Inna Savenkova, Vladimir Glotov, Oleg Kots, Yelena Dubrovskaya and Ruslan Chernetsky.

The idea of staging the performance was born following a master class and lectures given by Spiazzi and Pippa held in Minsk in April. Rehearsals began soon in Belarus with the Italian director and playwright teaching our actors all aspects of masked performance. Later, they wrote the text in Belarusian together, joined by scholars from the Belarusian State University, fluent in both languages. 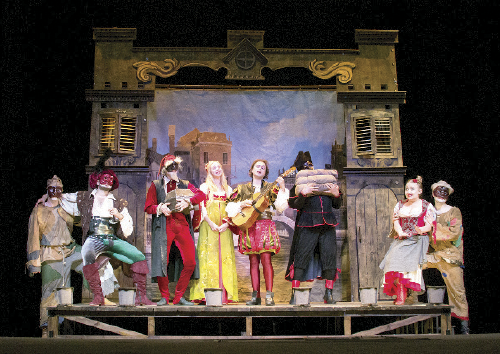 “Our ideas were generated during rehearsals,” notes Mr. Pippa. “We were improvising and, each evening, I wrote the lines, sending them to an interpreter every night; by early morning, we had our script ready to be distributed.” Italians and Belarusians used three languages to discuss the ‘theatre of emotions and shows’, while dancing, singing, training in gestures and cooking spaghetti…

Commedia dell`arte epitomizes the joy of living in the moment, in order to be content. It encourages the audience to forget past sorrows and to concentrate on the happiness of today. All the characters of this emotional and dynamic performance are in love: one adores a wonderful lady; another is in love with a mysterious stranger; a third covets gold and diamonds; some love youth and beauty; others embrace carnal delights; and one character loves all others and is fond of teasing. The action takes place in the most romantic city in the world — Venice — and is accompanied by serenades, secrets, intrigue, sun, sea and carnivals.