Conversations about the need to unload the operating Minsk ring road were held five years ago. The road has almost reached its limit of traffic capacity. In peak days, traffic exceeds 120,000 vehicles a day...

Conversations about the need to unload the operating Minsk ring road were held five years ago. The road has almost reached its limit of traffic capacity. In peak days, traffic exceeds 120,000 vehicles a day...

The new ring road is designed to lower the ecological load on Minsk and to raise transit attractiveness of the country. The decision on its construction was made in 2010. Excavations started, but crisis nearly spelled the death of this project. At the beginning of this year the President gave instructions to continue the construction and recently decided to personally visit the construction site near the village of Vishnevka in Minsk Region. 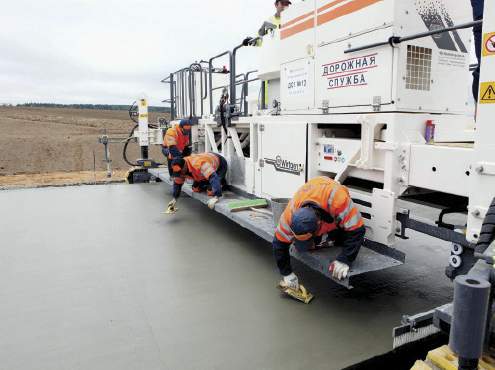 The first metres of the new highway please the eye. An ideally smooth monolithic surface — it is possible to land a plane here. The width of road bed is almost 23 metres, with two lanes in each direction. The feature of the second ring road is that during construction the workers are using a modern technology of laying of the cement-concrete covering. Its advantages over usual asphalt are obvious to experts. And soon drivers will feel the difference. The warranty period of operation of the concrete road is 25 years, while an asphalt covering is estimated at 5-8 years. Besides, concrete roads are capable of sustaining considerably heavier loads that certainly will be estimated by long-distance truck drivers. But these are those pluses which, as it is said, lie on the surface. Another benefit is also that for roads with a concrete covering, we have a lot of own raw materials while for asphalt we would need bitumen produced from expensive imported oil. And it becomes more difficult to receive it because our oil-refineries are constantly increasing the depth of oil refining. That is, using modern technology, we save currency resources, we load our cement works, we construct better roads and, as a result, we raise the transit attractiveness of the country, Alexander Lukashenko has built a logical chain.

Now the matter depends on the road builders. Construction of the second ring road is in two stages. The first, 46 kilometres long site, will connect highway М3 Minsk-Vitebsk near Ostroshitsky Gorodok with highway М6/Е 28 Minsk-Grodno (near Aksakovshchina). The second stage provides construction of a 42-kilometre from highway М6/Е 28 Minsk-Grodno to highway М1/Е 30 Brest-Minsk-border of Russia. The general length of a new ring road will total about 160 kilometres.

This year, road workers planned to lay the cement-concrete covering on 3.5 kilometres of road. However, the President is categorically dissatisfied with such a rate. Having listened to the explanations of experts which referred to the fast approach of the cold weather, limitation in financial assets and other factors, Alexander Lukashenko announced his decision, “By January, 1st, 2017 the ring road should be ready!”

And, addressing to the Director of Belgiprodor, Oleg Pigunov, he added, “When the construction is finished, you will invite me here, we will open a bottle of champagne and see the New Year in.”

Thus, the President demanded from the designers and builders fewer experiments with earth moving. There should not be excessiveness and unreasonable financial expenditures. The state control committee is obliged to check the real cost of work at the building stage, instead of after its end.

Today, it is already obvious that the decision made in due time on the transition to scale construction of roads with concrete covering was correct and very timely, taking into account that volume of works, which are to be fulfilled under the programme of reconstruction and construction of republican highways. Alexander Lukashenko especially specified the importance of transit directions, in particular, on the highway to Polotsk and the highway connecting Gomel and Brest. One more instruction of the President concerned the possible increase of the authorized speed limit on the operating Minsk ring road to 120 kilometres per hour. The Ministry of Transport and Communications should think it over in the near future.