The right to education is guaranteed for every resident of our country. A multiple educational system, which has been formed and examined for years, allows the realisation of this 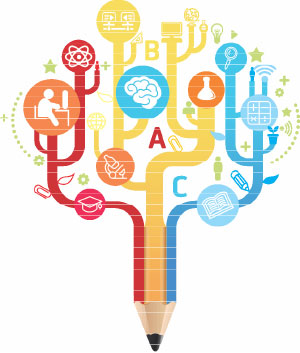 The right to education is guaranteed for every resident of our country. A multiple educational system, which has been formed and examined for years, allows the realisation of this

Preschool education is, figuratively speaking, the first step on the stairs. A network of preschool institutions, which differ through types and profile of working with children, is included in its structure. Preschool education isn’t obligatory, but most children visit a day nursery, a nursery-kindergarten, a kindergarten and a kindergarten-school. On profile, kindergarten institutions are divisible into institutions of general purpose, with in-depth orientation, special preschool institutions for children with special needs and preschool centres for the development of a child. By the way, the government is currently working on a question about providing private institutions of preschool education with state aid on child support. In this case, as the Deputy Prime Minister, Anatoly Tozik, said, when visiting Mogilev #1 Preschool Centre for the Development of Children, ‘participants will have even more incentive to work, to develop material and a technical base and to increase the skill level of its workers.” According to the opinion of the Deputy Prime Minister, with a more broadly supporting private initiative on creating preschool institutions in big cities, we can faster solve the problems with the shortage of places and can provide easy walking access to elementary education and breeding.

In the educational system of Belarus, two languages — Russian and Belarusian — are used.

The national high school of Belarus is presented by 54 state-run higher education establishments, as well 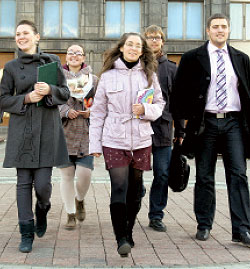 as 10 privately owned institutions. There are classical universities, profile universities and academies, institutes and high colleges. In our country, licensing of educational activity of all higher education establishments, independently of pattern of ownership, has been conducted. The Belarusian State University and the Belarusian National Technical University are leading higher education establishments in the national educational system, 9 institutions — leading industrial.

Higher education is prestigious and available in our country. By the way, in Belarus the ratio of students to the total population is one of the highest in Europe.

Entering a higher education establishment, an entrant chooses educational form, which can be full-time, part-time or evening-time. All graduates, graduating from institutions of various patterns of ownership, get a state-recognised degree.

Training programmes in higher education establishments is designed for 5 years.

In 2002, in accordance with the Decree of the President ‘On Accession of the Republic of Belarus to the Convention on the Recognition of Qualifications Concerning Higher Education in the European Region’, Belarus became a full member of the Lisbon Convention of 1997, prepared together with UNESCO and Council of Europe. It allows the solving of the problem of recognition of diplomas from Belarusian higher education establishments, improves the development of international co-operation and the attraction of foreign students.

51 educational institutions conduct activities in the sphere of provision of paid educational services to foreign residents. The training is carried out in the Russian or Belarusian language. Its cost, according to international practice, is defined by the institution itself on every specialty. Before the beginning of training, most foreign residents have to pass a one-year language course in Belarus, at the faculty of pre-university training of the institution.

Training of scientific and scientific-educational personnel in Belarus is carried out in post-graduate course, the doctorate of the higher education establishments and scientific organisations of the Ministry of Education (edu.gov.by). In our country there is also a network of educational institutions of the system of further training and retraining of personnel. Republican bodies of state administration, as well as local regulatory authorities direct the educational system in Belarus. The Ministry of Education has responsibility for state and development of the educational system in our state.

The adoption of the Code of the Republic of Belarus of Education on January 13th, 2011, became an important event for the educational system. Thereby, for the first time in our country, the task of codification of social relations in the sphere of education was solved and an independent branch of law — educational — was formed. The structure of the national educational system was specified. The name and matter of educational levels were renewed. But the Code isn’t a once and for all rigid dogma; life, as the saying goes, makes its allowances, so in one or two years, some changes and amendments will be made. And it says that innovations are possible also in the sphere of educational system.
Заметили ошибку? Пожалуйста, выделите её и нажмите Ctrl+Enter