‘Kvasnik’ knew his business through and through

If today, we were offered a list of Belarusian drinks from say, 300 years ago, I am sure, we would be very surprised

If today, we were offered a list of Belarusian drinks from say, 300 years ago, I am sure, we would be very surprised Obviously, we would not see a mojito cocktail or an elite tea from the Junshan Mountains. But the variety of Belarusian drinks would undoubtedly amaze us. Kvass, kissel, syta, sbiten, klenovik, krupnik, krambambulya... And, surprisingly, even coffee! Even in the 17th century, when in many neighbouring countries people did not even know of its existence, Belarusians savoured this flavoured drink.

So we ask the questions: How did coffee beans get to Belarus, what did mulled wine substitute to our ancestors and why did they set fire to krupnik? 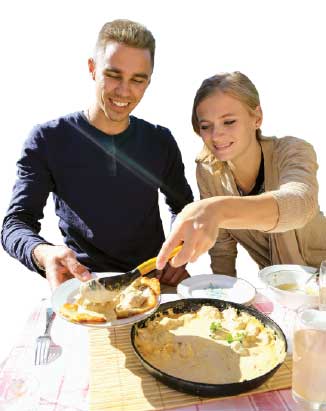 Unfortunately, even today there exists a stereotype of Belarusians drinking only vodka. However this ‘demon drink’ only appeared in the territory of Belarus during the 17th century. While the most ancient alcohol drinks were beer and mead, and people did not get drunk with them.

Belarusians made drinks from honey for a long time. The simplest of them was medovukha: honey was boiled with water and then yeast was added. After that, this mixture was poured out into tuns and fermented for several weeks.

Sbiten was also prepared with honey, with the addition of spices and herbs — cinnamon, cardamom, nutmeg, ginger and bay leaf. People drank sbiten hot, especially during the winter months, in order to get warm and to protect oneself from cold. According to Chronicles of Drinks of Belarus, based on materials of historical youth competition which was held in last year by the Lidskoye Pivo Company, sbiten gained popularity in the territory of Belarus around the 16th century. It was available in fairs where cups of sbiten sold like hotcakes. Based on these old texts, we safely call sbiten a Belarusian mulled wine — a hot wine with spices, without which it is nearly impossible to offer any Christmas market in Europe.

The word ‘sbiten’, by the way, comes from a Russian verb meaning to ‘beat up’. Traditionally, the components for this drink were prepared separately (honey — in one pot, spices — in another), and they were mixed up just before use.

People also prepared krupnik with honey, spices and herbs (with vodka as the base). It was recommended to collect the herbs by oneself, as it was believed that if done, krupnik had a totally different smell and effect: you do not get drunk, but received special internal feeling. Traditionally krupnik was served when it was hot and in tureens, but in peasant houses people drank it directly from cups or big wooden spoons. There was one interesting ritual of ‘firing’ the krupnik, when all the components were put into a big clay bowl and then set on fire. A hostess gave a sign to all her guests and they all started to blow simultaneously on the flame in order to blow it out. It would seem that several centuries ago Belarusians had already developed the skills of the barmen.

Special honey based, ceremonial drinks were also prepared. For example, syta, a drink that was required at the funeral table. Traditional syta was prepared very easily — honey was simply diluted in boiled water.

There were also other ceremonial drinks. On Christmas Eve, people cooked oat kissel. While on Kupalle — kulaga: berries were washed and then cooked in a special pot. When berries began to soften, people added flour, some water, honey or sugar, then they mixed it up and boiled on low heat until it became like kissel. Kulaga was served with pancakes or bread and milk.

One of very popular drinks of our ancestors was kvass. This drink was first mentioned in Chronicles of Nestor. It was so popular that the trade of ‘kvasnik’ (maker of kvass) arose — a skilled artisan, who knew how to cook various kinds of kvass. Traditionally kvass was prepared from rye bread, rye (sometimes wheat, oat, barley) flour, rye or barley malt. But there was also kvass with honey, horseradish, blackcurrant leaves and even from beets! People valued maple and birch juice based kvass too. And in order to make kvass tastier, the tuns, containing the juice were buried in sand for 6 days.

Kvass was prepared not only for drinking, but also as a basis for many dishes. On rich merchant weddings there were traditionally ‘nine kvasses’, meaning nine dishes based on kvass.

Coffee made in Belarusian way

It seems that coffee was brought to the country by participants of the Battle of Vienna, which took place in September, 1683. The armies of the German princes and the Grand Duchy of Lithuania, under command of the Polish King and the Grand Duke of Lithuania, John III Sobieski, destroyed the army of the Ottoman Empire, which besieged Vienna and thus put an end to the aggressive wars of the Ottoman in Europe. Apart from a victory for the side on which our ancestors fought, they also received all the riches of the Turkish armies. Among them was a wagon with eight tonnes of coffee and various tools for its preparation. Thus, coffee appeared in Belarus. Olga Kopachenya assures that people drank it in almost every home.

However, for a long time the Belarusians did not know how to make coffee correctly: people poured it into cups in large quantities, and the drink was very dense and strong. Therefore, people often washed down their coffee with cold water. Coffee was also served with a glass of water in coffeehouses.

We often look to foreign shores and dream of tasting Spanish sangria or Italian grappa, but those from a distant land have much to learn from us, while we have much to be proud of.

Kvass based on beer
(Recipe from Pavel Klyuchnikov)

In a two-litre pot pour 250g of beer, add birch juice, stop up and put in a basement. After two months, you will have a light kvass with the aroma of beer and considerable quantity of gas.

Sbiten
(Anna Shiryaeva’s family recipe, which is more than one century old)
1 litre of water
3 tbs. honey
1 tbs. dry mint
2 buds of cloves
Add some anise, melissa and juniper. You can also add coriander or thyme.

Boil water, add honey, reduce heat and boil for another ten minutes. Add mint, spices, and herbs and boil another five to seven minutes, slowly stirring. Drink sbiten when it is warm, otherwise you will not get warmed, and you will not taste the spices.

Berry syta
(Recipe from Alexander Soroka)
Take 50g of honey, half a litre of juice (currant, raspberry or other) and 2 glasses of water. Dilute honey in the boiled water, then cool and add the juice.