Anyone coming to Stolin District’s village of David-Gorodok of the eve of the New Year (according to the old calendar) would certainly enjoy taking part in its wonderful ‘Koniki’ (Horses) festivity. The tradition remains in this town in Brest Region alone and may soon be put forward for UNESCO’s List of Non-tangible Cultural Legacy. 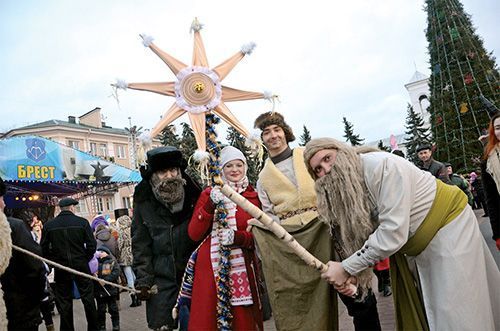 In late 2013, Belovezhskaya Pushcha became known for boasting the tallest New Year tree in Europe, aged 150 years old. This summer, its needles turned yellow and began to fall, so it was decided to cut it down. As National Park staff explain, last year was unlucky for the fir tree forest, which was beset by eight-toothed bark beetles. Pleasingly, a new fir tree is now ready for the winter holiday: an 11 metre tall ‘beauty’.

The winter season in Belovezhskaya Pushcha is the shortest and warmest in Belarus, with the average temperature in severe January reaching minus 4 degrees Celsius. The National Park occupies a large territory, keeping its snow cover for two weeks longer than other south-western districts in Belarus. The snow sometimes remains even until May and, this year, the first snow arrived in the Pushcha on November 19th.

With this in mind, unsurprisingly, Father Frost resides in this ancient forest. Not long ago, he returned from his trip to Velikiy Ustyug, having taken part in celebrating his Russian colleague’s birthday. Belarusian Father Frost then welcomed guests at home on November 29th, in the company of Snow Maiden and Mother Winter (with her daughters: Snowstorm and Snow Blast). Father Frost’s ancestor — Zyuzya Poozersky — also came along, as did Bolotnik (the swamp spirit) from Berezina Reserve.

The Fairy Glory Avenue was unveiled, with ten wooden sculptures of fairy tale characters: of course, Father Frost is on friendly terms with them. The statues include those of Russian Father Frost, Glinyshek, Zyuzya and other characters from legends and fairy tales.

In December and January, Belovezhskaya Pushcha attracts many guests and Father Frost’s Residence hosts New Year theatrical performances, with games and joyful contests. Visitors can promenade through the Town of Masters, seeing works by local craftsmen, while children receive treats and presents from Father Frost. Up to 5,000 guests are welcomed daily.


The Head of the Brest Regional Public-Cultural Centre’s Traditional Culture Department, Larisa Bytsko, smiles while telling us about the local ‘Horses’ custom. Villagers organize it independently and, as she explains, ‘everything looks natural’: local residents lead ‘Horses’ and distribute presents. She likens it to a ‘Belarusian style Rio de Janeiro carnival’. ‘Horses’ used to be grey rather than white, with riders wearing a caracul hat. Each horse’s body is made from basket weave, while its head comprises a felt boot, its mane and tail are of hemp, and a ring sits about its neck. Modern ‘Horses’ all resemble each other, being made identically. Senior citizens from the village of David-Gorodok admit that more people take part in modern festivities these days, making them more joyful. 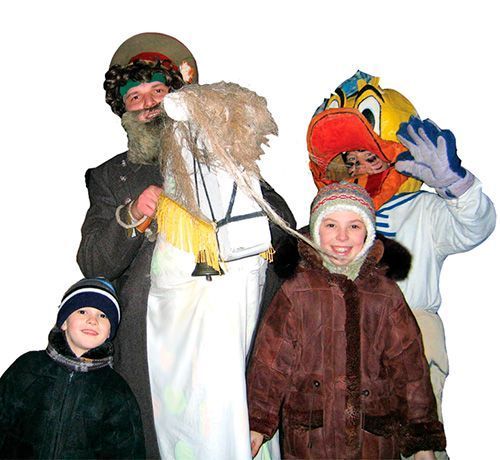 On my own visit, arriving by car, we were surrounded by those taking part in fun, each wearing a disguise and offering us jolly greetings such as: ‘Generous evening! Kind evening!’ Some groups held bright stars or played timbrels, drums and harmonicas. The atmosphere was bright indeed. I loved the way houses had been decorated, with sparkling garlands, and, late in the evening, a fancy-dress parade took to the streets, proceeding through the square, where the statue to Duke David (the town founder) is sited. Music, song and dance filled the night, leading to the improvised ‘Gorodok Hut’ stage, and a theatrical performance featured artistic troupes from Stolin, Pinsk and Ivanovo districts.

David-Gorodok residents love sewing costumes and have been having fun with the tradition since childhood; it deserves great appreciation. After visiting homes with congratulations, the ‘Horses’ go to the square to show off their costumes and have photos taken. Of course, those visited at home are always ready with treats and money to bestow for songs and performances.

The festive programme — scheduled for January 13th-14th night — envisages welcoming guests near the David monument, visiting the David-Gorodok History Museum and an exhibition of local craftsmen. In addition, there will be a master class on mask and horse costume production. The solemn opening of the festival is to take place on the town’s central stage. The best ‘dressed’ private courtyards, as well as those owned by companies and enterprises, will be awarded, and the night will end with a disco. 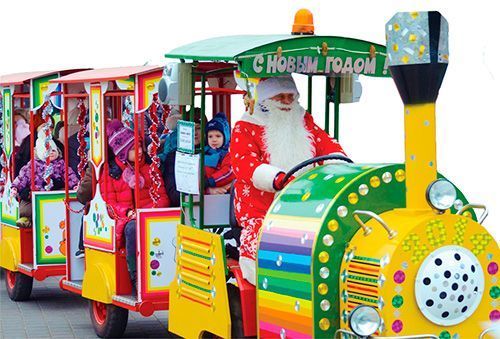 Stolin District residents have already begun their application to have the ‘Horse’ custom included among Belarus’ List of Intangible Historical-Cultural Treasures: for its uniqueness and its preservation into our modern 21st century.


We are now witnessing the birth of new, bright and interesting New Year traditions, with the custom of giving gifts supplemented by others. In Brest Region (as in other Belarusian areas) there is the wonderful custom of organizing a charity New Year fir tree for children.

In late 2014, Brest’s Regional Hospital and Brest’s Sanatorium Boarding School for Scoliosis Children both opened new wards, while a therapeutic department for newborn and prematurely born children launched at Brest’s Regional Maternity House. This high-tech perinatal centre is also due to open a medical-genetic laboratory and an operating room, in 2015. From January-November 2014, around 6,000 babies were born at Brest’s Regional Maternity House — almost 200 more than in 2013. In fact, the region now leads in terms of population growth through birth-rate. Since 2013, Brest Region has witnessed an upward trend, with 2014 and 2015 set to continue in the same vein.

As we welcome the New Year, we should remember that it is the time for beginnings, putting failure and mistakes behind us. In this respect, our childhood dreams have their role to play. 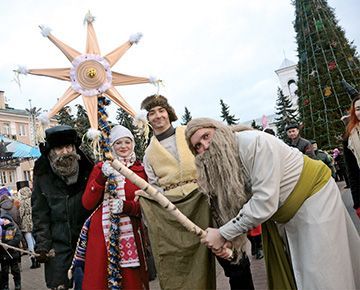