Over 9,000 Turkmens study in Belarus, with 708 attending the Belarusian State University — the country’s oldest higher educational establishment, which is among top 500 worldwide

Over 9,000 Turkmens study in Belarus, with 708 attending the Belarusian State University — the coun-try’s oldest higher educational establishment, which is among top 500 worldwide. Zhanna Savelieva, the head of the Department of Foreign Student Works and International Marketing

To learn more about Turkmens’ student life at the BSU, we chat with the head of the Department of Foreign Student Work and International Marketing, Zhanna Savelieva, and with some of the best stu-dents who’ve come from Ashgabat to study in Minsk.

Ms. Savelieva, why is the BSU attractive to foreigners — including Turkmens?

Primarily, we offer high-quality education; BSU diplomas are recognised by Turkmenistan’s Education Ministry. Moreover, foreigners are attracted by the stability and safety of Belarus. Our students are housed comfortably, and have good conditions in which to study and relax. During the holidays, they can travel to Nesvizh, Mir Castle or abroad, as we’re close to Europe. Moreover, the BSU enjoys strong bilateral contacts with Turkmenistan. We annually attend national exhibition-fairs to demonstrate our educational opportunities.

Which departments are most popular with Turkmen students?

Interest in certain specialities depends on the political-economic situation in Turkmenistan. When new projects emerge, these naturally entail interest in qualified personnel. Five years ago, our geographic and economic departments enjoyed increased interest among Turkmen students, due to construction of the Garlyk mining factory (to produce potash fertilisers). Not long ago, Turkmenistan realised edu-cational reform, introducing a 12-year system of education, and raised salaries for teachers. Turkmen students are now showing more interest in our Philology Department. Meanwhile, the Law Depart-ment and the Foreign Relations Department have always been popular among foreigners, including Turkmens.

How do Turkmen students cope with the language barrier?

Some study for a year at our preparatory department, but most already speak Russian, having pre-pared well ahead to enter our University.

What other challenges do Turkmen students face?

All students face challenges, including Belarusians, although we do have an educational ‘filter’ via our centralised testing. Turkmen students often need extra work on school-level sciences, so we offer additional individual classes in the first two years, to help with this. In some cases, we also allow mixed physical exercise classes to be curtailed, on religious grounds. Moreover, some students become homesick, going home for several weeks at a time, which doesn’t help their educational progress, and gives them a certain reputation.

Do lecturers treat foreigner and Belarusian students equally? Or is there indulgence for some catego-ries of student?

All are treated equally. As regards indulgences, the BSU this year introduced a decree on discounted fees for foreign students who achieve good results, or who take part in public activities or confer-ences. Three Turkmen citizens are already on the list.

Do Turkmen students face problems in communicating with Belarusians?

Our student organisation — the BSU Council of Communities — is responsible for foreigner students’ adaptation, encouraging them to join in with various events, such as our Days of Friendship. These help Belarusians gain acquaintance with Turkmen culture, while representing their own traditions and customs. Some projects have been launched jointly with diplomatic missions, such as an artistic party devoted to poet Magtymguly Pyragy, with Turkmenistan’s Ambassador in attendance. Every year, we organise a contest among foreign students of all our higher educational establishments: Mister and Miss International. This major event is widely covered by the media and is advertised. Moreover, the BSU hosts the Ball of Alumni for Foreigners; every year, around 430-450 former students attend!

Do Turkmen students support your ideas?

Turkmens love to take part in our events but prefer to come in groups. They behave well and love to sing, dance and play instruments. Belarusian students are often interested in learning about their cul-ture.

Do any conflicts emerge on a religious basis?

Never! Belarusians are very tolerant. We always pay attention to our students in terms of hospitality and good behaviour. Nuances emerge only in the social sphere: for example, some foreign students don’t realise that, in sharing a room in a hostel, they should take part in cleaning, viewing themselves as guests.

Do many Turkmen alumni stay in Belarus after graduation?

Very few; some marry, while others receive a working visa to take up employment here. As soon as we begin chatting, I’m impressed by Aiza’s smile. Her face lights up and her joyful mood contrasts with the rainy autumn landscape.
Aiza studies at the International Relations Department and hopes to become a diplomat, staying in Belarus. She isn’t deterred by our cool climate (in comparison to Ashgabat). On the contrary, she’s en-joying her first snow, and is delighted to be in Minsk. Of course, she misses her mother and her na-tional cuisine, but she often calls home and visits other Turkmens who live in the hostel, cooking tradi-tional soups, meat and pilaf together.


Not long ago, the BSU hosted the Republican Festival of Foreign Students, with Aiza acting as its host. She smiles on recalling the event. It’s clear that she loves Belarus. In fact, she’s had little spare time to visit places beyond Minsk. She does enjoy the cinema and walking in Chelyuskintsev Park, and has plans to visit Grodno.

I would say that Aiza has a bright future: the Turkmen beauty is in her first year of studies. Speaking of her view of Belarusians, and our young men in particular, she notes that she appreciates their helpful-ness. Belarusians’ kind hearts and sympathy have helped her to settle into her new city very quickly, and she sees local men as attentive, polite and caring. Seyid Yumudov is a fourth-year law student. His choice of university was always clear, as his older brothers graduated from the BSU. Seyid views the legal professions as having an important role to play, and sees a good future for himself in Turkmenistan. Unlike Aiza, it was hard for Seyid to adapt initially, as he didn’t enjoy the wet Belarusian climate. He found our culture and traditions difficult to adjust to, and his studies were also very challenging. However, he never faced any problems with local students.

To become better acquainted with Belarus, in 2010, Seyid joined the BSU’s Folk-Choir, Capella, as its only foreign member. Over the past five years, Seyid has visited many countries during the choir’s touring schedule, helping the group win prizes at international contests.

Seyid also loves to take part in conferences. In 2014, he prepared as essay entitled Russian Language Helps Give Form to My Thoughts, which earned him the title of laureate at the 2015 Republican Zlato-ust Elocution Contest.

Seyid is among the lucky few who enjoy discounted fees. In his spare time, he loves to read, draw and play the piano, which stops him from missing his homeland too much. Seyid plans to return to Turk-menistan after graduating. Speaking of Belarusians, he says that they are friendly, helpful, warm and sensitive to others’ problems. 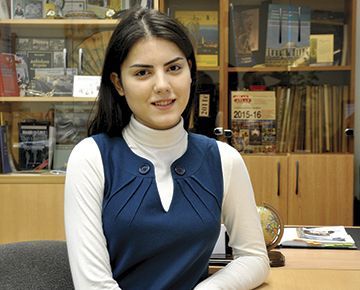