‘For Honour of the Fatherland!’ was the motto of the civic event, which was displayed under the banner of the 70th anniversary of the Great Victory over German fascism. From September 3rd to the 21st, Zubrenok National Children’s Centre hosted more than 430 young boys and girls who were students of cadet classes and colleges throughout the Union State. 252 of them arrived from Crimea, Karelia, Moscow, Pskov, Volgograd and other regions and republics of Russia, 180 from Minsk and all regions of Belarus. 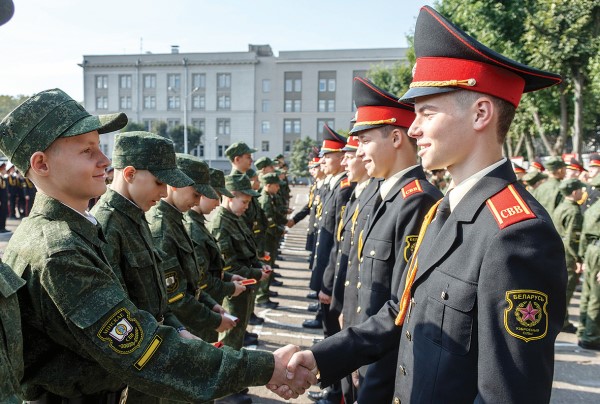 Union State Day was the main focus of the camp. The programme of events included meetings with well-known people whose deeds strengthen the integration of Belarus and Russia, as well as the discussion of achievements and prospects of co-operation between the two countries. Each delegation aspired to show the features and opportunities of their region, its rich history and contribution to Union State development. Children demonstrated their knowledge of military history and military science, participated in the sports game ‘Hurricane’, competed in relay races in running, swimming and grenade throwing for accuracy and range. Young patriots also visited the updated museum of history of the Great Patriotic War in Minsk and toured the capital.

The cadet camp has been in Zubrenok was held in Belarus for the 9th time since 2007; traditionally students from Minsk Suvorov Military School participate. In total, about 3,500 of boys and girls from Russia and Belarus took part. It is one of the major activities financed and held under the aegis of the Standing Committee of the Union State. The Head of the Information Department at the Committee, Margarita Levchenko, explained the enormous value of such work, “The military elite has always been one of strongholds of both Russia and Belarus. The education of the people in protection of the Fatherland is a task of state importance. The development of the cadet movement and the preservation of Suvorov movement in Belarus and Russia is the sign of a respectful attitude to military men that provides stability and ensures the peaceful future of the Union State.”

At the same time as the cadet meeting was taking place in Zubrenok, deputies from the House of Representatives of the Belarusian Parliament, representatives of the Standing Committee of the Union State, experts of some ministries and departments responsible for youth education and heads of various public organisations met in Minsk to discuss the civic and patriotic education of the youth of Belarus and Russia. Journalists invited by the Standing Committee also took part in the discussion.

Margarita Levchenko noted during the discussion the importance of reinforcing the moral and ideological thinking behind the cadet groups. “At the heart of this co-operation lies a historic consciousness, a feeling of patriotism and readiness to fulfil ones civic duty. The Union State Standing Committee attaches a great deal of importance to this. As well as the camp, there is also a festival entitled, ‘Youth for the Union State’, tourist events filled with patriotic elements and cycle races for Belarus` and Russia`s boys and girls, and many other things.”

The participants of press were shown how civic-patriotic education works in practice, as they visited the Minsk secondary school #2. They also visited Minsk Suvorov Military School, where over 90 percent of graduates will continue their studies in military institutions of higher education, including Russia`s.