Oksana enters the forge and connects her phone to high capacity loudspeakers, hidden from the dust under polyethylene film; Chopin fills the room. Her 8-tonne pneumatic hammer is like a metronome, shaping the red-hot iron in time to the composer’s waltz. The unexpected melody is a wonderful complement to the industrial noise of the forge, just as Oksana is the feminine creativity in this ‘manly’ environment. 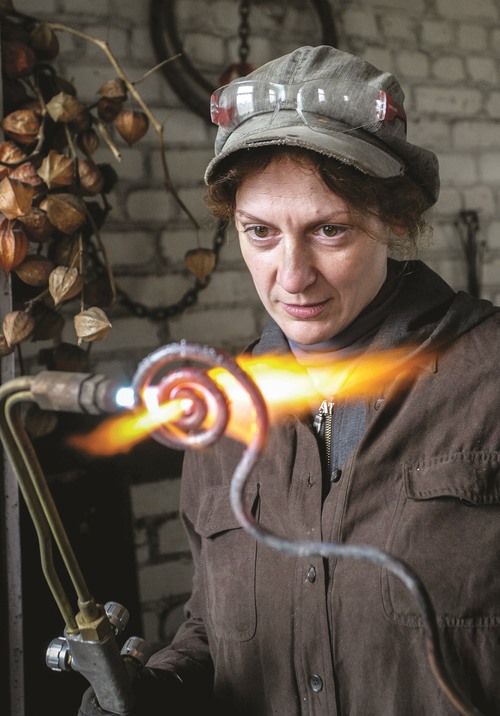 Oksana is, of course, dispelling ste-reotypes in her choice of profession, but she has nothing to prove, simply telling us that she enjoys her vocation, and is devoted to its pursuit. She is ‘the iron lady’, dexterously handling her hammer, ‘growing’ a rose from a metal rod or forging a vine.

For several years, Oksana worked as an economist, at a joint Belarusian-Dutch sewing enterprise, and was then engaged in foreign trade for ‘Elektromodul’, at Belkoopsoyuz. She notes, “I realized that I didn’t want to live a life thought up by others, so I took another path. Now, I’m eager to work every day, not just to earn money but to take pleasure in having contact with the elements of fire and metal.”

Oksana strikes a match and fire flashes in the forge; you can hear air being sucked in and there is the smell of smoke, as Oksana throws on coals.

“It’s always possible to retrain. I used to worry that the full burden of the household would fall upon my husband but that doesn’t have to be the case. You just need to be well prepared, setting aside funds to last six months. Then you cease doing what no longer interests you and learn something new. In general, it doesn’t take long to decide, and put aside worries. If you prepare, then you plan for success. Make your plan, commit it to paper and then eradicate all that’s superfluous.”

Oksana takes her pincers, clutches a piece of iron, and tongues of flame start to dance around the metal, heating it up to red. Then she switches to a hammer and places her heated piece of iron between the firing-pins. The huge hooting mechanism now takes a solo position in her composition. She presses the pedal with one foot and, with abrupt staccato, the hammer hits, shaping the iron into a thin petal. Now it needs manual manipulation, using small-sized ‘70s’ hammers. The automatic hammer is twice as heavy. 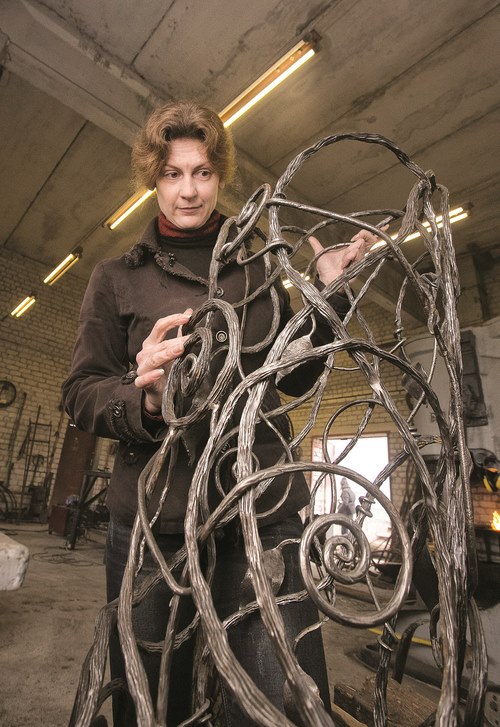 “It’s a large tool,” she admits, saying that it provides 80 percent of the work. You might think that such a heavy hammer would be incapable of fine work, but it’s all in the setting and the skill of the blacksmith. She also notes, “When I began working, I walked on the razor’s edge in terms of safety.” During her training, she had her hair pulled by a drill and realized that safety needed to be a priority. Now she has the experience and skill necessary and chooses to work with a relatively light 1kg or 800g hammer, heating her iron up to a higher temperature to ensure that it’s malleable. Her male colleagues tend to use hammers of 2.5kg.

Oksana offers me an iron rod, inviting me to try my hand, and her enthusiasm is infectious. Without hesitating, I take the reinforcement rods and copy her demonstration of hea-ting the iron before making a double hit to flatten it a little and sharpen it. Next, we bend it, so that iron begins to take on the form of a plant stalk.

She offers me a small hammer, striped yellow, which is her favourite. She admits, “I don’t care about the appearance of tools, as long as they do the job. An artist can paint in water­colours, charcoal or gouache. The important thing is the result. When this part becomes hot you see a small fracture but it will disappear if you hit here.”

The iron rod yields, and a small curl appears under the hammer. It’s an iron fairy tale! Working in the forge is improbably fascinating!

“The result is only one small part; the process should bring pleasure,” Oksana reflects. There’s always a path of understanding and adventure. I want to create a park of sculptures, in exchange for someone paying for a stable for horses. Horses are so clever. In fact, they took me on the path to becoming a blacksmith. Fifteen years ago, I saved a pregnant mare on her way to the meat-packing plant. I rented a stable for her, which I filled with hay. Stables often need repair, so I decided to master the business of welding, training at the railway depot. I went to the forge and understood then that it was my calling: one I’d never want to leave.”

Are there any other women blacksmiths?

New forging technologies mean that ‘metal artists’ don’t need the muscles once required. Nevertheless, women blacksmiths are still rare. In Tula, 37-year-old Natalia Zabelina forges weapons for men, while Masha Arkhangelskaya is well-known in Korolev. Since the age of 16, she’s participated in blacksmith-armourer exhibitions, which are held twice a year in Moscow. Meanwhile, Siberia’s Anna Melgizina heads the non-commercial organization of ar-tist-smiths in Altai Krai.