Oleg Novitsky to captain crew in 2016

Into orbit once more 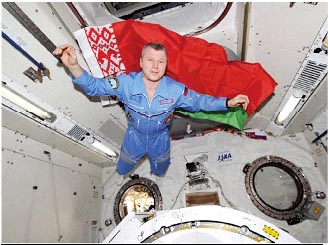 NASA and its partners have announced members of two expeditions to the International Space Station. American Peggy Whitson and French Thomas Pesquet will set off to the orbital station on November 15th, 2016, on the Soyuz spacecraft. The cosmonauts will spend 164 days at the station and, in March 2017, will be joined by Russians Alexander Misurkin and Nikolay Tikhonov, as well as US representative Mark T. Vande Hei.

Oleg Novitsky and his colleagues will return to Earth on April 28th, 2017. Mr. Novitsky will perform the role of crew captain and is the third Belarusian to see our planet from orbit. He previously captained the Soyuz TMA-06M spacecraft, which launched on October 23rd, 2012.

Born in Brest Region, in 1965, he joined a crew of cosmonauts and became Yuri Gagarin’s colleague at the age of 23. He made his first flight with aerial engineer V.V. Lebedev, on the Soyuz-13, and took part in three space trips, spending 78 days outside of the Earth’s atmosphere.

Born in Krupki District’s village of Beloe, in Minsk Region, Vladimir was a pioneer of space exploration, making three space flights: the first was in 1977, the second in 1978 and the third in 1981. In total, he spent 216 days in space.