Minsk hosts sessions of the CIS Heads of State Council, the EurAsEC Inter-state Council and the Supreme Eurasian Economic Council

Minsk hosts sessions of the CIS Heads of State Council, the EurAsEC Inter-state Council and the Supreme Eurasian Economic Council 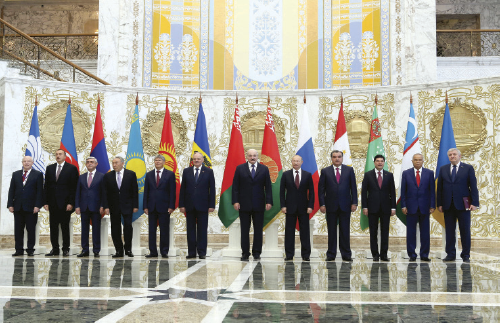 The heads of the states — participants of the summit in Minsk


The current Council of the CIS Heads of State finished Belarus’ two-year chairmanship of the Commonwealth. All participants agreed that it has been a very fruitful period and that Minsk has worked hard, to the benefit of all (volunteering to take on an additional year instead of Kiev). As ever, diverse issues were debated.

The heads of delegations signed a joint address for the CIS and the wider world community in connection with the 70th anniversary of the Victory of the Soviet people in the Great Patriotic War. Belarus, as the country which most suffered from Fascism, pays special attention to this topic.

The complex situation in Ukraine came under discussion but, unfortunately, the President of Ukraine failed to attend the summit; the country was represented by the Ukrainian Ambassador to Belarus. The CIS heads of state share a similar outlook, being eager to see a speedy cessation of military conflict and Ukraine’s return to a peaceful life. Meanwhile, Belarus remains faithful to its principal position that compromise must be achieved, following agreements reached in Minsk. Alexander Lukashenko asserted, “All issues under dispute should be solved peacefully. We can’t allow the blood of our brotherly nation to continue to run. This situation of an armed conflict at the centre of Europe is absolutely unacceptable.”

The President of Belarus emphasised that such conflict affects the security and economic development of other countries across the post-Soviet region — not just that of Ukraine. He added that the CIS needs to tackle the situation, since Ukraine is a member state. He underlined, “This is not just my point of view; I’m convinced that this position is supported by almost everyone. It’s inadmissible when vital issues regarding a country such as Ukraine are addressed somewhere else: in Berlin or Milan. If this is the case then how can we address our own economic, political or diplomatic issues? Perhaps they should be addressed in Berlin or Milan as well!” The Ukrainian topic was tackled by each of the presidents in attendance, showing that the Belarusian assessment was shared by all.

Mr. Lukashenko expressed another concern, as Council Chairman, noting the trend for disintegration across the CIS. During discussion on various integration vectors, Moldova’s situation came under debate, since its joining to the European Union presents problems regarding economic collaboration with Russia, which wishes to strictly enforce trade regulations. The issue demonstrates that much debate should take place before decisions are made, with all advantages and disadvantages weighed carefully. The CIS remains a valuable forum for such a debate.

Security issues such as drug trafficking, illegal migration and human trafficking came under scrutiny, with solutions including air-defence co-operation, liaisons between prosecuting agencies and financial intelligence units, and the application of joint rapid response groups: all aiming to secure border integrity.

Next year is to be declared the Year of Education across the CIS, with Kazakhstan, as the new chair, giving this great consideration. The President of Kazakhstan, Nursultan Nazarbayev, assured everyone that work will follow principles upheld by Belarus during its chairmanship. The next CIS Heads of State Summit will be held in Astana next autumn.

Other decisions adopted in Minsk were also of great import, with the presidents of Belarus, Russia, Kazakhstan, Kyrgyzstan, Tajikistan and Armenia gathering for the EurAsEC Inter-state Council. Chairman Vladimir Putin noted the major issue to be the signing of the treaty on the termination of the Eurasian Economic Community. Other items on the agenda flowed from this. The EurAsEC has existed for 14 years, having been created on October 10th, 2000. Mr. Lukashenko noted that the organization has promoted integration, laying foundations for the establishment of the Customs Union and the Single Economic Space (which, in their turn, have laid foundations for the Eurasian Economic Union).

The logic of the next step is evident, as the President explained, “Today’s decision to change the format of our interaction reflects contemporary integration trends.” The abolition of the EurAsEC does not exempt those states outside of the Customs Union and the Single Economic Space from taking part in future integration processes. The liquidation of the community presupposes the termination of international documents now duplicated via the Eurasian Economic Union; others will continue in effect. Meanwhile, current EurAsEC members plan to move towards the Eurasian Economic Union.

At present, only Tajikistan wishes to observe the work of the Eurasian Economic Union before committing itself to membership. Kyrgyzstan would like to postpone its joining until the end of the year. The Supreme Eurasian Economic Council meeting discussed Kyrgyzstan’s current realization of its ‘roadmap’, stating that progress was evident, with support needed from other countries. This will be delivered, so that its membership can be launched. Armenia has, meanwhile, conducted all necessary preparation and has adapted its legislation to meet the standards of the Customs Union and the Single Economic Space — allowing its joining to the Eurasian Economic Union. Having been an observer to the EurAsEC, its status is enhanced.

From January 1st, 2015, the Union will put aside its previous ‘troika’ format in favour of ‘four’ or even ‘five’ states.

The presidents of Belarus, Russia and Kazakhstan officially announced the synchronous ratification of the Eurasian Economic Union Treaty by their countries’ parliaments. According to Mr. Lukashenko, the Eurasian Economic Union already occupies a niche within the world economic and political arena and needs now only to pass its final legislation, to create the largest common market across the Eurasian space. There is no doubt that this will be complete by the end of 2014, allowing a new, powerful economic centre to emerge on the world map.

Alexander Lukashenko negotiated with the President of Uzbekistan, Islam Karimov, suggesting that Belarusian-Uzbek relations should be taken to a higher level. He stated, “We can literally double our trade in 1-2 years.” He added that ‘this momentum in the trade with Uzbekistan would raise the need to advance relations in other areas’.

Mr. Karimov stressed that the meeting was timely, since the media have long speculated on contradictions in Belarus-Uzbekistan relations.

The President of Uzbekistan noted that Belarus is becoming more open to the global community, enhancing its international contacts. “All this proves that life is evolving, and pragmatism requires that we promote the interests of the society and people entrusting their fates with us,” Mr. Karimov said.