Minsk visited by the Secretary General of the Central Committee of the Communist Party of the Socialist Republic of Vietnam, Nguyen Phu Trong

Minsk visited by the Secretary General of the Central Committee of the Communist Party of the Socialist Republic of Vietnam, Nguyen Phu Trong 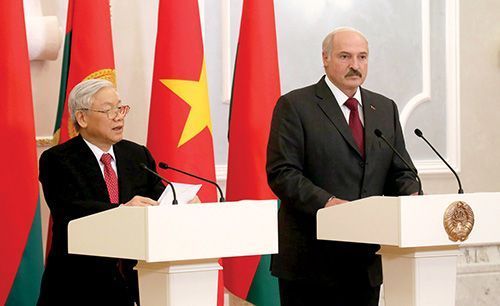 In its president, parliament and government, Vietnam has the political structure in place for all the workings of the republic. The current Constitution dictates that the head of the Communist Party determines the leadership of the country; it’s the General Secretary that is considered to be the head of state. The President of Belarus met this important guest.

It has been easy for the two states to build a trustworthy relationship, facilitated by the historical legacy of the USSR. The Soviet Union supported Vietnam in its struggle for independence, and students from there studied in the Soviet Union, including Belarus. The Vietnamese remember this and appreciate the assistance they have had. It has led to their openness in developing a cooperative relationship and hopes of future links between the two countries. The aims of both governments in collaborating are to stimulate the development of the two countries and to benefit each nation.

Of course, economy comes to the forefront. Our views primarily coincide in the political dialogue and the assessment of the world processes. This is a good basis for active business interaction. Belarusian enterprises have an opportunity to considerably expand the supplies of various technique — necessary to Vietnam, particularly, agricultural machines, automobile machinery and heavy-duty dump trucks. The President drew the attention of his guest that Minsk is ready to stimulate trade with contemporary instruments: mechanisms of leasing, export loans and insurance. Nevertheless, closer industrial co-operation is a strategic vector.

There are certain achievements in this area. Belarusian MAZ vehicles are assembled in Vietnam while Vietnamese coffee is processed in Belarus. The sides are determined to continue developing such projects. Our partners are actively developing passenger transportations and the enterprise manufacturing Belarusian buses and probably other technique, could fit this programme rather harmoniously.

Each side’s interest in mutual penetration of investments received attention, with the process viewed in a wider context then merely bilateral interaction. Work in Belarus opens up vast opportunities for Vietnamese businesses to enter the Eurasian Economic Union market, while we are keen to encourage Vietnam as a reliable base for promoting Belarusian economic interests in South East Asia. Moreover, we boast a high level of mutual understanding with neighbouring states politically and they are demonstrating clear business initiatives.

Nguyen Phu Trong assured Mr. Lukashenko that Belarusian initiatives completely coincide with Vietnamese expectations. During the negotiations some definite areas of collaboration have been discussed. For example, it was decided to open a Belarusian trade centre in Hanoi and a Vietnamese trade centre in Minsk. Moreover, the preparation of the agreement on the zone of free trade will also be accelerated. Parliaments, governments and regional authorities will also join the work in their areas.

Mr. Lukashenko proposed to determine 3-4 particular large-scale projects that will act as a locomotive for co-operation. These would be patronized directly by the heads of the two countries and would demonstrate the example of benefits which are generated by the partnership.

The reached agreements were stipulated in the joint statement of the President and the Secretary General. Moreover, Mr. Lukashenko said that next year he is going to visit Vietnam and, by that time, all proposals, aiming to strengthen liaisons, will have been prepared in details.