The recent session of the Union State Supreme State Council, in Moscow, was a landmark event, involving the Chairman of the Supreme State Council, the President of Belarus, Alexander Lukashenko, and Russian President Vladimir Putin. The meeting’s high status was confirmed by its focus on priority areas and mid-term development tasks, alongside mutual understanding of the need to further develop the Union State and its prospects. 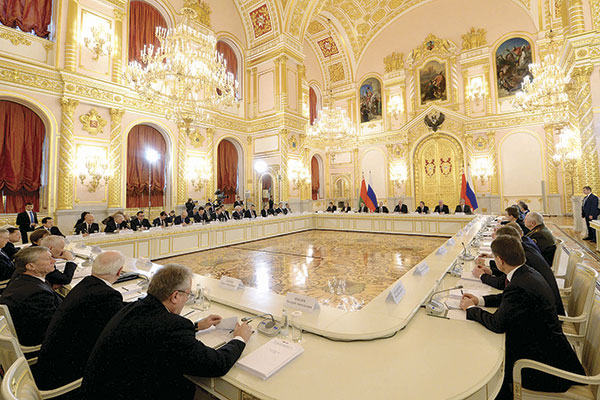 Mr. Lukashenko stressed, “We’ve advanced so greatly that it would be inexcusable, on behalf of our people, to lose our pace of growth.”

Over the past two years, mutual turnover between Belarus and Russia has slightly fallen since the peak of 2012 (largely because of the unfavourable foreign economic situation). There is also a misbalance in our economies and some barriers to a single industrial policy and common market. The Supreme State Council session looked at measures to overcome these problems, including budgetary issues and the need to take into account recommendations made by the control bodies of our two states.

The approved Union State budget for 2015 amounts to almost 5bln Russian Roubles. Despite the difficult economic situation, it has been slightly increased, with 85 percent being dedicated to financing 36 joint Belarusian-Russian programmes, covering power engineering, construction, transport and agriculture.

Those controlling such programmes are to be given enhanced responsibility, with Union State budgetary policy becoming more flexible and efficient, to allow resources to be directed towards priority areas.

A plan of action to strengthen trade-economic co-operation is also vital and has come under repeated discussion, considered primarily and then receiving approval from heads of government. The plan is being used to guide priorities for the Union State development, adopted by the Supreme State Council for the period until 2017. Its core comprises foreign policy, the formation of a single sci-tech space, the development of the agro-industrial complex, the creation of a single migration space and common labour market, and provision of social protection for our two states’ citizens.

Mr. Lukashenko and Mr. Putin summed up the results of foreign policy for 2014-2015 and outlined future prospects, agreeing to continue towards a single visa space for Belarus and Russia. With this aim, there are plans to prepare an agreement on mutual recognition of visas for foreign citizens.