In essence of ambitious intensions

A new state programme of pharmaceutical development, which is being launched in early 2016, will have a special attention on export

A new state programme of pharmaceutical development, which is being launched in early 2016, will have a special attention on export. It is planned to reach a 50 per cent share of Belarusian drugs at the inner market already up to the end of the year. 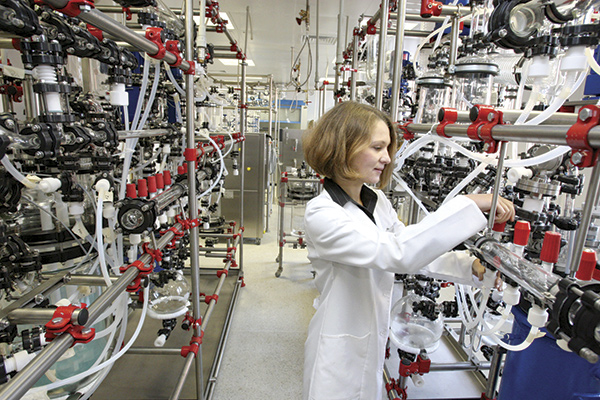 Belarusian drugs can be described as qualitative, accessible and efficient; to achieve these characteristics, our science, production and sales networks have united their efforts. At present, Belarus’ 28 pharmaceutical companies produce over 4,900 medicines, with some extremely modern projects being realised. Belmedpreparaty has a workshop producing anti-tumour drugs — unique within post-Soviet space for equipment and technologies. Meanwhile, the Borisov Plant of Medical Preparations has launched a new workshop able to produce up to 1 billion pills annually, in addition to 70 million capsules. The Scientific-Practical ChemPharmSynthesis Centre has begun work at the National Academy of Sciences’ Institute of Bio-Organic Chemistry, synthesising substances on the basis of our scientists’ innovations. In addition, the Institute of Physical Organic Chemistry is producing various medications.

“We’ve ensured a high level of competitiveness for Belarusian medicines, regarding quality and price. 70 percent are priced at less than one US Dollar,” Mr. Shein notes, adding that a moratorium on increasing prices on Belarusian drugs is in action. Prices are not permitted to exceed that of imported analogues. Moreover, over 35 medicines are subsidised and subject to price regulation, being produced at a loss.

The competiveness of our drug manufacturing is helping sustain prices. Importantly, Belarusian medicines are able to compete abroad: we sell to 29 states. A new programme of pharmaceutical development is being launched in early 2016, with the focus on exports. At the moment, three companies — Belmedpreparaty, Lekpharm and Pharmtechnology — have GMP certificates confirming full compliance with world standards (as is necessary to begin export supply).

The Belarusian market annually produces over 100 new drugs; these are mostly generic (analogues of imported medicines). Each pharmaceutical company runs its own scientific department to oversee this task — which is not easy, taking several years to be realised. Serious tests are conducted in the process of registration. From January-July, our producers registered 98 medicines never before produced in Belarus, to cover a market worth Br519bln — including Br350bln of state purchases (for clinics and hospitals). Production mainly focuses on the major medicines necessary for modern treatment — including anti-tumour preparations.

Future plans are ambitious, including production of 145 new drugs and 15 substances. To reduce our dependence on imports, new methods of substance synthesis are to be developed and full cycle manufacturing launched. The Academy of Sciences is to play a major role in the process.