In commemoration of tragedies

Selitsky Street, in Minsk suburb of Shabany, has a 10m tall bronze sculpture entitled `Memory Gate`, featuring emaciated prisoners from a Nazi concentration camp. Bodies of victims intertwine with leaves and barbed wire, symbolising the impossibility of escape. A camp was located here during the Second World War. 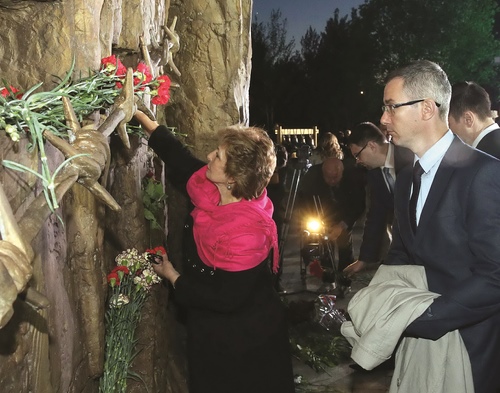 The sculpture is a central part of Trostenets memorial complex, the construction of which began after the President’s visit on June 8th, 2014. At that time, Mr. Lukashenko laid a capsule bearing a message to our descendants, under a commemorative rock, calling it a ‘memory tribute to those who suffered hardships and ordeals in the 20th century’ as well as a place where those who ‘appreciate humanitarian values and a peaceful future’ might gather.

On May 14th, 2007, the Council of Ministers included the territory of the former Trostenets death camp onto the state list of historical and cultural monuments, covering Blagovshchina Tract (a place of shooting), the camp near the village of Maly Trostenets, located in Selitsky Street, and Shashkovka Tract (a place of burning prisoners).

Institute Minskproekt helped erect the architectural-sculpture, under the supervision of Anna Aksenova. The Memory Gate is the work of Konstantin Kostyuchenko, whose design was chosen in 2010, following a nationwide competition. A whole brigade of masters has worked on creating the memorial.

An Avenue of Memories leads from Selitsky Street to the Memory Gate. One year ago, there was no more than an open field and the ruins of the former concentration camp, where the ashes of thousands of people burnt by the Nazis lie in the soil. Now, at last, those victims of genocide have been immortalised. Information plaques stand along the Avenue, giving details of Belarus’ largest concentration camp. Symbolically, citizens of Germany were the first to visit, in early May this year.

The camp near Maly Trostenets was created by the Minsk security police and security service in early 1942, located on 200 hectares of pre-war collective farm, named after Karl Marx. Prisoners built a house for the commandant, as well as premises for guards, and a garage, and laid a narrow road from the Mogilev highway to the camp, along which young poplars were planted. The camp was fenced with electrified barbed wire and guarded round-the-clock by guards in towers, armed with machine guns and submachine guns, along the perimeter. A large farm began work in May 1942, as did a mill, sawmill, a metal workshop, a joiners shop, a shoe shop, sewing workshops and other places of work.

From spring 1942, the Nazis began to bring citizens of various nationalities to Trostenets, twice a week. Some arrived at the station in Minsk, but most were transported via a special branch line, almost to Trostenets itself. They were unloaded onto the platform; their belongings were removed, and they were given receipts (to avoid a commotion and to convince people that resettlement was imminent). Those with skills, such as electricians, mechanics, joiners, tailors and shoemakers were sent into the camp, while others were sent directly to die within the crematoriums.

The number of prisoners rose quickly, inspiring the need for greater protection. Barracks were dug deeply into the ground, with very narrow windows, and were filled with plank bunk beds. Each was surrounded by three rows of barbed wire (the middle one being electrified) and had an earthen floor. At the corners of the fencing were towers for guards with machine guns and earthen ramparts surrounded the camp. Several tanks were also positioned along the embankments. It was a fortress behind the walls of which people were destroyed.

During the years of occupation, Trostenets saw the massacre of Minsk undergrounders and partisans. Those arrested were taken first to the prison in Volodarsky Street (‘Pishchalovsky prison castle’), for interrogation and torture, before being sent to the camp in Shirokaya Street, and then to Trostenets.

Shortly before the liberation of Minsk and its vicinities, two big ditches were dug at the camp, with long barracks-dugouts at the bottom, where the Nazis kept those who were sentenced to death. When Nazi cars arrived to take these people, they tried to barricade the door, resulting in grenades being used.

The Nazis used not only fixed gas-chambers but those which were mobile, on specially equipped cars, with a canopy body, galvanized walls and tightly closed doors. These were used to deliver prisoners from the prison in Volodarsky Street and from the concentration camp in Shirokaya Street to Trostenets.

The Trostenets death camp was operational constantly. Even at the end of June, in 1944, some days before the liberation of Minsk by the Red Army, 6,500 prisoners were brought from the prison in Volodarsky Street and from the camp in Shirokaya Street, to be shot at the camp. This took place in the former collective-farm shed and then the bodies were burnt. Only two people escaped: Stepanida Savinskaya and Nikolay Valakhanovich.

Trostenets remains a sacred place of memory and repentance for the whole world. Minskproekt is now working on the second phase of the memorial.

Archaeologists from the History Institute of the National Academy of Sciences of Belarus have been excavating the former concentration camp site since May 2014, finding many artefacts which throw light upon events from those times and earlier: a considerable number of human remains, including fragments of skulls and burnt bones and ashes. They have unearthed fragments of footwear (men’s boots and puttees, and women’s shoes), as well as buttons, spoons, a fork, and spectacle lenses. All are evidence of the atrocities committed at the camp. In late June, 1944, the Nazis destroyed and then burnt a great many people. Building remains have been dug up and placed into storage.

Vadim Koshman, who heads Archaeology of the Middle Ages and Modern Times, at the Institute of History, notes, “Examination of these foundations shows that the buildings date not from 1942-1944, when there was a concentration camp, but from the 15th-18th centuries, being made from stone and red-brown block bricks, which were common to those times. We’ve also found tableware and ceramic tiles from the late 18th and early 19th century. Possibly, the site was home to a noble family, with the upper floors of the building being wooden. Early 20th century maps contain information on the ‘folwark of Yarlov’ (the estate of Yurlov). Perhaps, between 1930 and 1941, the house was used by the Karl Marx collective farm. Later, during the occupation, the Nazi administration of the Trostenets death camp took over.”