Military conflicts around the world compel millions to leave their native homes and travel, sometimes, thousands of kilometres

Military conflicts around the world compel millions to leave their native homes and travel, sometimes, thousands of kilometres. Hundreds of immigrant families, from Ukraine, Syria, Yemen and Afghanistan, have found a new life in the south-east of Belarus.


Gomel Region, owing to its geography, was the nearest for citizens from Ukraine fleeing the military conflict zone of  Donbass. 2015 has seen the second year of a seemingly never-ending stream of Ukrainian immigrants to the south-eastern region of Belarus. Young, old and families with small children have settled in areas bordering their native land, finding a roof over their head and work opportunities.

The agro-town of Uritskoye is a large settlement now home to families from Donetsk and Lugansk areas and its two large agro-enterprises are providing accommodation. Almost 15 Ukrainian families are building a new life with the help of OJSC Combine Vostok. Its director, Dmitry Korzh, tells us, “People have arrived with a desire to work and earn money. They are industrious and responsible. We have no complaints. In fact, we’ve received obvious ‘gains’. One young man, with the wife, has moved to us from Gorlovka and we’ve employed him as a commercial agent. Vladimir Stakhov’s knowledge of foreign languages is helping us make contact with foreign partners and his experience of working with the media is very useful. We now issue our own newspaper: the Vostochnye Vedomosti.”

The Deputy Director of the enterprise, Natalia Samofalova, takes me to meet Vladimir, who was among the first settlers in Belarus. Natalia explains, “They are very positive young people. In spite of what they’ve endured and experienced, they’re always in a good mood. They quickly joined the collective of workers, and are gradually making their way. Our people, of course, support them. After all, we understand that they left their country through obligation rather than choice.”

Vladimir cheerfully and readily chats about his past, although avoids details about the war. When sad events began to unfold, they decided to go to Belarus. He and his wife chose Uritskoye as his wife’s relatives live there. Vladimir has experience of teaching the English language, as well as working with commercial companies, and with television and online journalism.


He admits, “In truth, I can’t help feeling that we’ve had an easy move, despite my initial fears of difficulties in a strange country. I passed my registration with the migration service of Belarus and then found a good job with the enterprise. I received a roof over my head, as they gave me employment-rented housing, and have so many opportunities. Part of my job encompasses things I view as hobbies: working with a newspaper and music. I want to use these opportunities well and justify the trust placed in me. People’s attitude towards us has been great, as everyone tries to help.”


New house at a distance of thousands of kilometres


The Gomel Centre of Temporary Accommodation, Social Adaptation and Rehabilitation of Refugees has been helping families from Syria too. They began arriving in February: 14 citizens having to start their lives anew.

It took several months to process the necessary documents, to learn about simple things and to learn basic Russian, through classes, but the families are starting to feel more settled. Workers at the centre have been very helpful and each family now has their own place to live. Jean-Yves Bouchardy, of the Office of the United Nations High Commissioner for Refugees (UNHCR), recently visited Gomel to check on conditions. He notes, “A joint project between the UNHCR and the Government of Belarus has worked to provide homes for these families, who are also receiving a monthly benefit payment. We’re helping them with legal issues and employment, as

well as adaptation. Similar practice is being extended to other regions of Belarus, as about 100 Syrian citizens have claimed asylum in Belarus.”

Three Syrian families are living in a new block in the suburbs, with a children’s polyclinic, large shopping centres, a school, an ice rink and a water sports complex nearby. There are so many facilities! We chatted with the heads of two Syrian families, who already speak Russian well.

Have you mastered Russian over the past 6 months in Gomel?

Mohammad Cheko has arrived from Syria with his wife and two children, but visited Moscow previously. He tells us, “I was there several times so I knew basic Russian. When my family was offered settlement in Belarus, we agreed, since our country is war torn. We used to run our own shop and had a home; now, we own nothing. By nationality, we are Kurds so our survival was in question. Two years ago, we moved to Lebanon and then onwards to Belarus.” 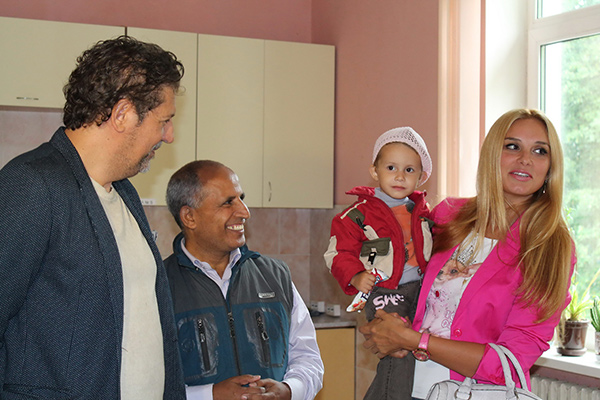 The head  of the family, Ahmed al-Fidii, with his daughter


His fellow settler Chebat Haisam, who also has a wife and two children, similarly speaks Russian, having studied pharmacology in Kharkov (Ukraine). He admits that he readily grasped the opportunity to come to Belarus from Syria. “I understand local people and I can speak the language. It’s more difficult for my wife and children so they began taking Russian language classes at the local university straight away.”

Resettlement has been harder for the third family, as Imad and Saza Ahmad have four children and are expecting a fifth: it will be the first to be born in Belarus. They didn’t have any knowledge of Russian before arriving but the younger members of the family have already picked up enough language to communicate. I’m welcomed into their home, where the children soon appear from their rooms.

How are you doing?

The father of the family tells me, “Fine!”

The hostess of the house then greets me: a young woman with a covered head. She shows me around the spacious apartment. Imad smiles, “This home is good and the rooms are large. Language is the most difficult thing. Certainly, we’re gradually mastering it and I can already pronounce the names of dishes.”

Imad is a chef and has been fortunate in finding almost immediate employment. He has a compatriot who moved to Belarus some time ago and has a restaurant in Gomel. He offered Imad a place as soon as he heard of him arriving. Imad admits, “It’s not simply my job. I’m engaged in something which I know and love.”

Workers at the restaurant readily underline that Imad is a godsend, being reliable, industrious, friendly and professional. Some customers only wish to order the dishes prepared by him.

This Syrian family is adapting to Gomel, finding similarities with their homeland. They say that summer is almost the same as in Syria, but five degrees cooler. Of winter, Imad says, “Sometimes, in our country, we have frosts of up to five degrees below zero. Of course, snow is a rarity. We’ll adapt to this too; it’s not a problem.”

From Yemen to Belarusian roots


The Gomel Centre of Temporary Accommodation, Social Adaptation and Rehabilitation of Refugees, alas, has been busy for some years now. It has hosted people from around the world, each seeking peace. Employees at the centre show me the environment in the centre where displaced people live.

There are spacious rooms, set out as ‘apartments’, with bunk beds and simple furnishings. There is one bathroom per floor. Workers at the centre tell me, “Settlers arrive with families and often have a lot of children. Therefore, we’ve provided various activity rooms, such as one offering classes in decorative and applied arts, allowing people to learn about Belarusian national creativity and to show us their own.”

Further along the corridor there are some new settlers from Yemen, who arrived in Belarus two weeks ago. The head of the family, Ahmed al-Fidii, takes his little daughter in his arms, and tells me, “My wife and I have four children. We left home for their sake, as combat operations had approached very close. There were fires and explosions so we decided to escape. We chose Belarus as my wife comes from here.”

Sadly, I didn’t meet his wife, as she was attending Russian classes with her two older boys. The children need to improve their knowledge in order to attend school on September 1st. Her husband notes, “We decided not to delay, as it’s important for children to adapt to a new environment quickly, and to find friends. Since our first days of arrival we’ve been looking for jobs, as we’re both doctors. I’m a surgeon and used to work in a clinic. I just need to confirm my medical qualification, as required by Belarusian legislation. I hope that all will turn out well here.”