Holiday in beams of Glory

Seventy years ago, on May 9th, 1945, the Soviet people claimed victory in the Great Patriotic War, which lasted 1,418 days and nights and during which the fate of the USSR, and the future of the world, was decided. 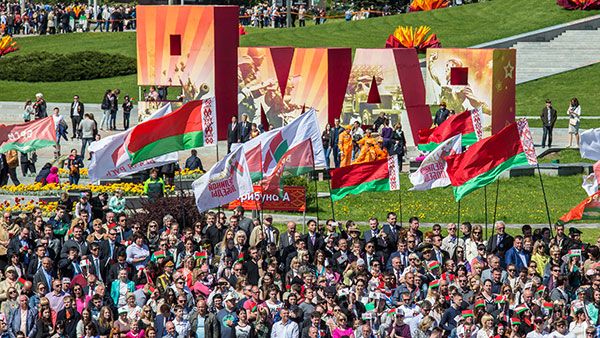 Belarus was one of the first USSR Republics to face massive attack from the Fascist invaders. It lost over half of its national treasure during those military years. In the first days of war, Brest Fortress fought to the bitter end, trying to hold back the invading army. Steadfast Mogilev withstood siege for a whole month. Over time, the enemy destroyed 209 cities and towns, as well as 9,200 villages, and over 100,000 enterprises. They crushed thousands of scientific and medical institutions, as well as schools. By the time we had claimed Victory, the Republic had lost almost a third of its population. 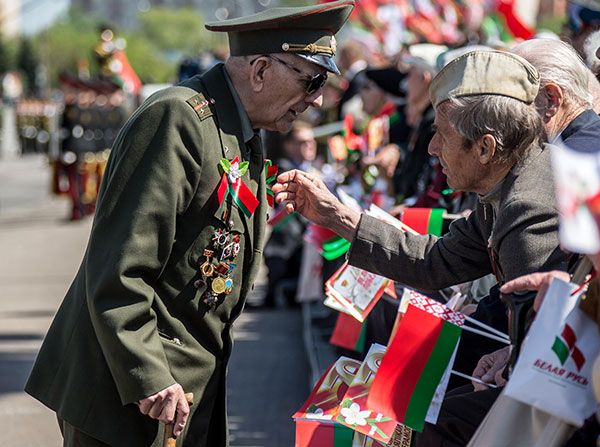 The President of Belarus notes that, every year, on the anniversary of Victory Day, in May, we make proclamations of hoping never again to see war brought to our lands. However, this year, he is sad to point out that we are yet to be ‘delivered from war’. “The tragic lessons of war have been forgotten. We don’t see the force of law; we see that force is the law. Once again, shells are exploding, fires blaze and people die. The world and Europe are approaching a dangerous line,” stressed Mr. Lukashenko, speaking at the army parade in Minsk honouring the 70th anniversary of the Soviet people’s Great Patriotic War Victory. 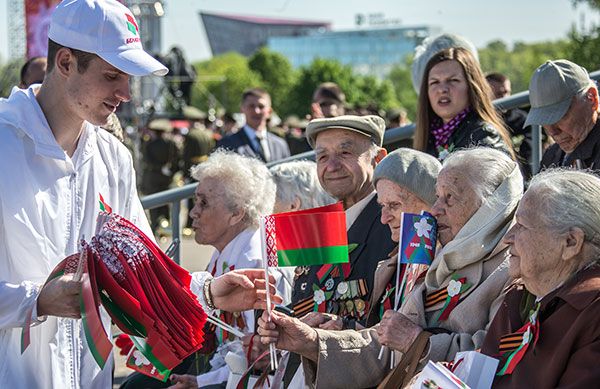 “It has never been more important to remember the lessons of the Great Patriotic War. Politicians, leaders and nations must remember these lessons. There is nothing more precious than peace: it’s the most important lesson. No ambitions, no calculations and no interests are worth the sacrifice of human lives,” believes the Head of State. 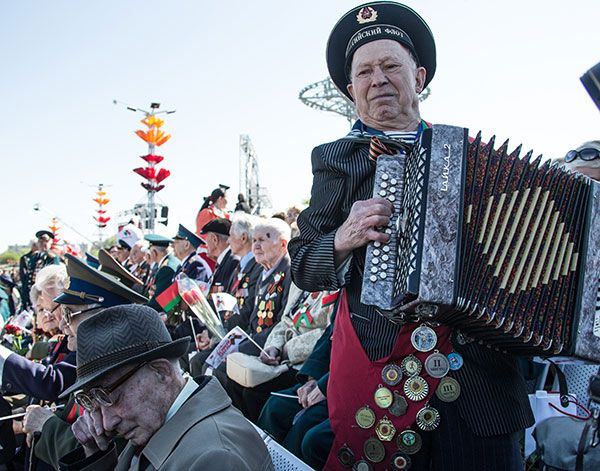 In his speech the President of Belarus stressed that the Great Victory of 1945 saved the Motherland from enslavement, freed Europe, and gave life and freedom to the entire world. “We secured victory after four years of fierce fighting, blood and victims. The way from Brest Fortress to Berlin was inhumanely difficult,” he admitted, adding that Belarusian lands faced the main assault of the Nazi forces. The fiercest battles and the most tragic events took place in Belarus at the beginning of the war. “It was in Belarusian lands that Hitler’s blitzkrieg war plans were buried and the foundation of the future Great Victory was laid,” said the President. “The enemy sent hundreds of thousands of punishment troops against us; they acted with barbaric ferocity, razing our towns and villages, and hanging, shooting and burning alive our women, children and old people. We faced total annihilation.”

“Yet, we were not broken! We endured and prevailed! In this battle, Belarus lost much and no amount of time can make this terrible pain go away,” said the Head of State.

Over 5,000 military personnel and about 250 army vehicles took part in the parade in Minsk marking the 70th anniversary of the Great Victory. The parade also involved cadets of the Military Academy of Belarus, soldiers and a combined orchestra. Apart from the army, the parade featured detachments of the State Border Committee, and troops of the Belarusian Interior Ministry and the Emergency Ministry, alongside military personnel of the Russian army.
During the parade, spectators were able to see army hardware dating back to the Great Patriotic War, as well as weapons and vehicles used by the Armed Forces of Belarus today. The parade began with vehicles dating back to the Great Patriotic War, followed by armoured vehicles, air defence missile systems, artillery units and multiple-launch rocket systems. These included T-72B tanks, BMP-2 infantry combat vehicles, BTR-80 armoured fighting vehicles, BelGrad and Smerch multiple-launch rocket systems, and S-300PS, S-300B and Tor-M2 air defence missile systems.

For the first time, the parade featured a large amount of army hardware from Russia, from the regional military force.

After ground units had passed, aircraft used by the Belarusian Air Force and Air Defence units made a fly-past: Mi-8 and Mi-24 combat helicopters, MiG-29 fighter jets, Su-25 assault aircraft, IL-76 military transport aircraft, and the Belaya Rus aerobatics team in a L-39. Four Russian Yak-130 and Su-34 bombers also joined the air show.
The parade ended with a marching drill by the guard of honour, involving over 100 people, and a performance by the combined orchestra of the Armed Forces of Belarus. The army parade was followed by a festive demonstration.