Close and fruitful Belarusian-Chinese interaction has achieved even a more advanced level, and each meeting between the heads of our states becomes some critical line after which collaboration is gaining greater dynamics. During the last visit of the President of Belarus to the People’s Republic of China, Minsk and Beijing have agreed to develop comprehensive strategic partnership, which is now filled with a wide range of joint projects in various spheres. The treaty on friendship and co-operation (a truly historical inter-state document) has become the major document of the current state visit by the President of the People’s Republic of China, Xi Jinping, to Belarus. It legally fixes the establishment of the comprehensive strategic partnership between the countries while one of the key business results is that our country is becoming an important player in the implementation of the Chinese concepts: Silk Road Economic Belt and the 21st Century Maritime Silk Road. 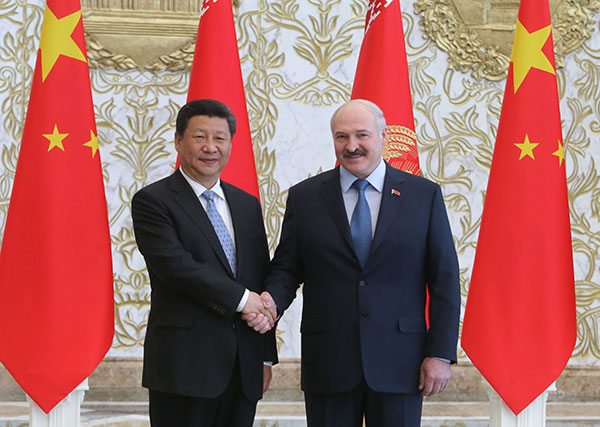 The sequence of Mr. Jinping’s three visits forms clear logic. On May 7th, he visited Kazakhstan, then paid an official visit to Russia where he took part in the celebrations marking the 70th anniversary of Victory in Moscow, and has finally arrived in Belarus on a state visit. According to the diplomatic protocol, this is the highest status of a visit to a friendly country by the head of the state — a very important sign. The People’s Republic of China is building a wide belt of good neighbourliness and mutually beneficial partnership, so it’s a true reason for pride that our country is in the orbit of China’s global interests. This absolutely coincides with Minsk’s views of its role as a reliable connecting link between Europe and Asia. This is beneficial for the country’ image and facilitates the strengthening of sovereignty also bringing tangible economic benefits. Moreover, it ideally fits the ‘idea of integration of integrations’, proposed by Minsk, with the creation of the single trade-economic space from Vladivostok to Lisbon. In this case Belarus finds itself at a very busy and reliable intersection through which people and goods move, making it very important for investments. Meanwhile, the military topic added special warmth into the atmosphere of negotiations. Victory in the Great Patriotic War and the end of the Second World War are uniting factors. Our countries equally view the truth of those times, believing that falsification of history and glorification of criminals is unacceptable, as was openly and sincerely noted by the heads of state.

Over twenty various joint documents were signed during Mr. Jinping’s visit. Speaking to journalists about the results of the work, Mr. Lukashenko paid attention that Minsk and Beijing had agreed to continue close co-operation on international arena and to actively support each other in the issues, dealing with national interests, national security and sovereignty. In the sphere of business the two sides show readiness to shift accents from pure trade to the expansion of mutual direct investments and implementation of production projects, primarily, in the high-tech and innovative spheres which form the economy of the future of the two states. The Great Stone Chinese-Belarusian Industrial Park is already under construction in Minsk, which harmoniously fits the Silk Road concept while becoming one of its key elements.

During the negotiations between the heads of state agreements have been reached regarding joint work on construction and modernisation of Belarus’ infrastructure, new schemes and mechanisms of inter-bank collaboration, opening of new credit lines, and the creation of modern manufactures in Belarus, involving large Chinese companies. There’re also plans in the sphere of military-technical co-operation. Moreover, expansion of tourist, educational and cultural exchanges was also high on the agenda. In total, there are almost no areas where Minsk and Beijing don’t have points of interests’ coincidence.

Obviously, inter-state interaction is based not only on economic motifs; they are rather the result of high political and human mutual understanding. Mr. Lukashenko and Mr. Jinping didn’t hide that they have been long connected by sincere personal friendship which is already a solid foundation for the substantial dialogue on any topic.

Belarusian-Chinese comprehensive strategic partnership continues, as is seen from the signed treaty on friendship and co-operation and from the joint declaration, signed by the heads of the two states. Mr. Lukashenko paid attention that the real opportunity for at least double increase of the bilateral trade turnover is already seen nowadays due to the reached agreements. Moreover, Mr. Lukashenko and Mr. Jinping took part in the Belarusian-Chinese inter-regional business forum and attended the construction site of the Great Stone Industrial Park. Partnership continues while also being filled with more serious and precious content.