Hero from retinue of Father Frost

Last year, when Belarusian Father Frost celebrated his 10th anniversary, many fairy tale guests gathered at his residence in Belovezhskaya Pushcha, alongside Russian Father Frost, from Veliky Ustyug, and other ‘spirits of the cold’: Tatar Kysh Babay, Karelian Pakkaine, and, from the most northern part of Belarus, Vitebsk Region, Zyuzya Poozersky (the god of winter) and Bolotnik (the marsh demon). The latter has ‘lived’ in the Berezinsky Biosphere Reserve for the past four years, entertaining tourists and arranging excursions year round, while participating in the New Year performances. On the eve of 2015, Bolotnik will receive dozens of tourist groups from Belarus and abroad. 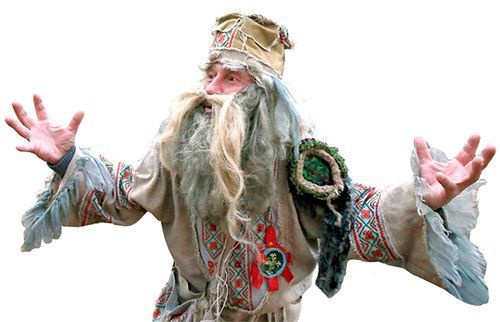 В lotnik is known for his terrible pranks, rather like Leshy (the wood goblin). According to folk tales, he likes to lead unwary travellers astray, together with their horse, taking them into the marshes, where they might drown. Berezinsky Biosphere Reserve guide Victor Rovdo tells us that the character at the reserve is far more good-natured. “I’m engaged in developing ecological tourism here, arranging cycle trips through the dense forest and kayaking along the River Berezina. For 100km, you can wander without seeing a village. I used to run an amateur theatre in the city of Vileika, working as a producer, which taught me that people (and children especially) find it hard to concentrate on monotonous lecturing. It’s far better to replace a traditional guide with a recognizable folklore character.”

More than half of the territory is covered by marshland, so it’s logical that Bolotnik has come to live at Berezinsky Reserve. Victor assures us that he never practices malicious mischief in his role, only entertaining guests and presenting gifts, while telling interesting stories about nature. If anyone throws litter, he may throw water over them or clap next to their ear to surprise them.

Bolotnik lives in a timbered izba but also has a modern mobile phone, to ensure he stays in touch with all those who wish to come and visit. Around 50 groups from Belarus and Russia wish to visit this New Year, and all of them will see Bolotnik as they tour the Reserve. In winter, he often begins snowball fights, makes snowmen, or skies and sleighs with guests.

Guests can also hire quadbikes fitted with skis and a caterpillar chain at the rear. Everyone admires the beautifully decorated fir tree and the dramatized performance of the abduction of Father Frost, in which friendly Bolotnik releases Father Frost from the wicked witch Baba-Yaga (from Russian folk tales) and Kikimora (a hobgoblin in female form). New Year performances are held in Berezinsky Reserve from December 15th, while Belovezhskaya Pushcha will host a whole range of festivities to delight visitors. 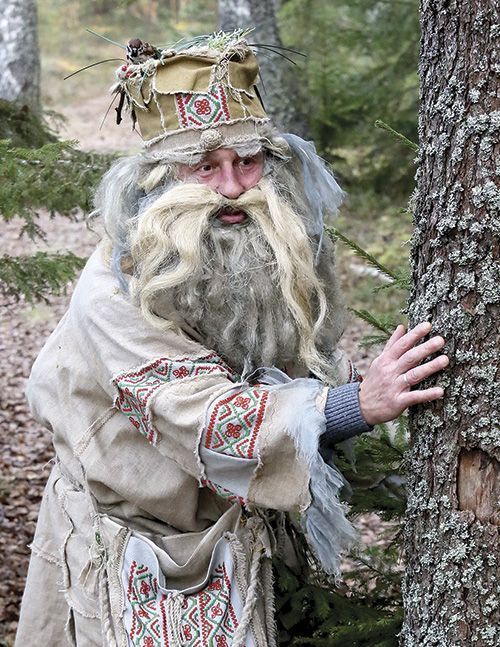 Victor tells us, “Last year, we launched the Fairytale Verst, while 2014 sees us present sculptures of folk characters, including Zyuzya and Bolotnik.” Unsurprisingly, most people like to purchase a souvenir of the visit, especially children, and many offer their gifts to Bolotnik, or like to have their photo taken with him, for display on social networks. The management of the Reserve is determined to promote such folk characters and is considering adding a Fairy Tale Glade, with a maze, magic sculptures and various bridges.

UNESCO experts recently visiting the Reserve were impressed by the fantastic guide, who lives in his log izba and tells guests how to care for nature. Occupying 85,000 hectares, the park is utterly breathtaking, while its marshes are truly the ‘lungs of Europe’. The more people who see its beauty and learn about environmental problems, while breathing the pure air, the better. Regardless of the season, warm or cold, it is an unforgettable destination.

Zyuzya is Belarusian Father Frost’s deputy: the lord of cold and god of winter is still called Zyuzya Poozersky, because he lives in Belarusian Poozerie (a place known for its lakes) in Postavy District. Long ago, he was imagined as an old man with a long beard, living in the forest, going barefoot and causing snowstorms and severe cold. When there is a strong frost, it’s said that he has been beating trees with his mace, making them crackle. From time to time, Zyuzya goes into villages to warn farmworkers of approaching cold weather, so that families remember to eat kutiya (boiled rice with raisins and honey). People say: ‘When Zyuzya is in the courtyard, then kutiya is on the table’ or ‘He has frozen, like Zyuzya!’

Experts at the Postavy Tourist Centre have revived this folklore character, at whose residence herbal tea and draniki are offered, alongside spiced cake in the shape of a snowman. You can make a penny whistle from clay or join in a cheerful New Year performance. Sadly, for the two last seasons, he has been without a home, as a new residence is sought.