This summer all international contests on sport programming among ‘gamers’ over 18, passed under the sign of Belarus

This summer all international contests on sport programming among ‘gamers’ over 18, passed under the sign of Belarus. Gennady Korotkevich from Gomel, well-known through his victories, won in the most significant world contests. 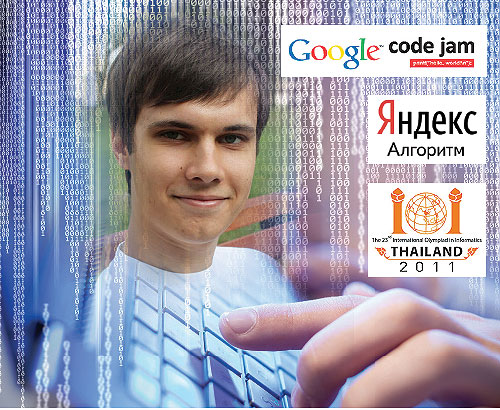 Gomel’s gymnasia pupil, Gena Korotkevich, has recently kept the world school society on tenterhooks, securing for years the unconditional leadership in international Olympiads on informatics. Currently, the student, Gennady Korotkevich, is going the same way, but already in the ranks of professionals of programming, leading world ratings and taking his place in Wikipedia. Confirmations are lying on the surface — the series of Korotkevich’s victories in prestigious international contests on sport programming. The last sensational victory is in Google Code Jam-2014. The contests, in which the Gomel guy participated for the first time, were held in the middle of August in Los Angeles, and they ended with a Belarusian final again. In 2013, in this contest Ivan Metelsky, a student from Minsk, became the best. Currently, the 19-year-old Gennady Korotkevich, from Gomel has the title of the strongest programmer on our planet.

In the world of programming Gena is a well-known guy. He began to show his unusual capabilities from the 2nd form of a usual school. Five years before the end of the gymnasium he created records, increasing the fame of the computer unique object with phenomenal abilities. When he was 11, he got a ‘silver’ at the international Olympiad on informatics among pupils, where the strongest young ‘coders’ of the whole world crossed his ‘brains’, and then — golden procession at contests and championships. There had been nothing like this in the world history of ‘competitive’ programming.

“Nobody comes close to Gena today,” I’m fishing from the Internet for reviews of pros after another victory by Korotkevich. “He is head and shoulders above the rest.”

However, it can be explained. Gennady’s parents Vladimir and Lyudmila Korotkevich are from the same environment: they are programmers and work at the Department of Mathematical Problems of Control of Gomel State Skorina University. A child can hardly resist if his father and mother with enthusiasm ‘hang up’ over a computer. Although it’s not typical for all children, here there is the same case. Following his parents, the boy strived after a glowing monitor. And at six years he began to ask questions. His father worked out for the curious child an available game programme of using the computer; thanks to this, at the age of 8, the child was already an expert in programming. And then, a famous Gomel’s teacher, Mikhail Dolinsky, the founder of the Belarusian school of informatics and training techniques, began to work with the boy.

Now, Gennady is a student of Saint Petersburg National Research University of Information Technologies, Mechanics and Optics of Russia. The faculty can be not specified. I think it’s clear: the Faculty of Information Technologies and Programming. For this summer, the second year student has shaken the virtual space several times to its roots. For example, on August 1st, in Berlin, he won in the Yandex. Algorithm-2014 championship, and became the only Belarusian finalist. More than 3,800 advanced minds from 72 countries worldwide participated in the selections here. Taking the main prize in the Yandex, Gena returned to Gomel for two weeks — for holidays at home and, after the little break, he went to Los Angeles to the Google Code Jam International Contest on Sport Programming. 20,000 ‘coders’ took part, but only 26 qualified for the final. The result was again in favour of the programmer from Gomel — he got the main prize — $15,000.

Miraculously, I managed to wrest Gennady from this cycle in virtual space and make an appointment. Korotkevich cheerfully steps out through a park in the centre of Gomel. I notice him easily from the last time we communicated, when Gena ended 11th form in gymnasium #56. I remember that he had been very late for our meeting — a football match on the school field had detained him. Today he has come on time. The man is ‘growing’ and certainly, I was surprised:

All students have holidays as holidays — and you, young man, journeys without a break?

I have holidays, too. With my parents I went to a recreation centre. We had a great time. Now I’m in my native city. Plus I have a few contests.

Let me congratulate you on victories. Are you satisfied with your results?

Thank you. I’m quite pleased. In the ‘Yandex. Algorithm-2014’ championship I accomplished four tasks from six. It’s better than my result last year. And in the ‘Google Code Jam’ contests I participated for the first time. Earlier my age prohibited me. Five tasks from six — it’s also not bad, but, certainly, not without a little bit of luck.

…and long hours of training?

Actually, now I don’t train before individual competitions, so as it has been, when I have learned in school; then I have really spent some hours a day on ‘keeping fit’. Today, it’s enough to join online-contests, which are held by some sites 1-2 times a week to stay in form.

And what can you say about complexity?

The aims of these specific tournaments are a bit different, and the contests differ through this fact, in spite of the same number of tasks. ‘Google Code Jam’ competitions are, however, more difficult. Here you have to really think a lot because the essence of this championship is to solve the task effectively. Perhaps, it can be made by a primitive way: you go through all possible solutions; and you can make it ‘useful’ and invent an effective algorithm. For example, there are a lot of programmes, which people use in their everyday life. These programmes can, perhaps, process every keystroke for 5 milliseconds, and can for 5 seconds. And if you always use such a programme, you won’t wish to wait every time an extra 5 seconds.

Certainly, it’s interesting for me to understand: how it is there, inside a sport event, terribly remote from my reality. However, Gennady can hardly explain to me — a ‘weasel’ of algorithmic puzzles — the copy-book truths of programming:

How can I explain it simpler? Ok, at the next meeting I will invent an example-task that even a housewife can understand. I can say only one thing: sports programming is for me, above all, a hobby, which is interesting. Why? It brings pleasure. It allows me to see the world. It acquaints me with a lot of good and interesting people. Even rivals can’t be called rivals. They are more friends, and I enjoy their successes.

Well, I know. It’s your statement: I compete with tasks, and not with rivals.

I don’t deny my words. But, as you understand, very much depends also on my rivals. By the way, in the last years, it’s absolutely obvious that the main fight breaks out between guys from Belarus, Russia, China, Japan, and Poland. There is such a power landscape in sport programming now.

Do you have any authorities?

More often I’m impressed not by a man but by his separate quality. To take the best characteristics of other people and to build yourself. Perhaps, so.

Let us suppose. And is there any famous statement, which coincides with your personal outlook?

‘TopCoder’ a well-known site, proposes to answer the same question, when registering. My quotation there is: ‘Nothing is impossible; impossible itself says I’m possible...’ — in Russian it means: “There is nothing impossible”, and in English there is in addition to it a funny word game.

Judging from the fact that Gena Korotkevich is first again, everything has weighted in the favour of Belarus. And the effective algorithm, the own competition with tasks, ‘a touch of fortune’… When we have taken leave, I, certainly, have asked about the fact, which is on the tip of my tongue.

Are the leading world companies fighting for Korotkevich?

Actually, the companies propose all participants of such contests to pass an interview and a probation period. But I don’t hurry. I have finished only my second course. At first I must get an education, and then choose my work. But I’m thinking now. And, perhaps, I will weigh everything at the very last moment, as usual.