The season of Belarusian drama, which begun in 2013, continues with a performance of Pesnyar

Hard road of the Creator

The season of Belarusian drama, which begun in 2013, continues with a performance of Pesnyar, by young playwright Vasiliy Dranko-Maysyuk, on the stage of the National Gorky Academic Drama Theatre.

The season of Belarusian drama, which begun in 2013, continues with a performance of Pesnyar, by young playwright Vasiliy Dranko-Maysyuk, on the stage of the National Gorky Academic Drama Theatre. Directed by Valentina Yerenkova, the play depicts the life of Vladimir Mulyavin, People’s Artist of the USSR. He was an outstanding musician and the creator of the Pesnyary vocal-instrumental ensemble. The actor Sergey Zhbankov will play the character of Vladimir. 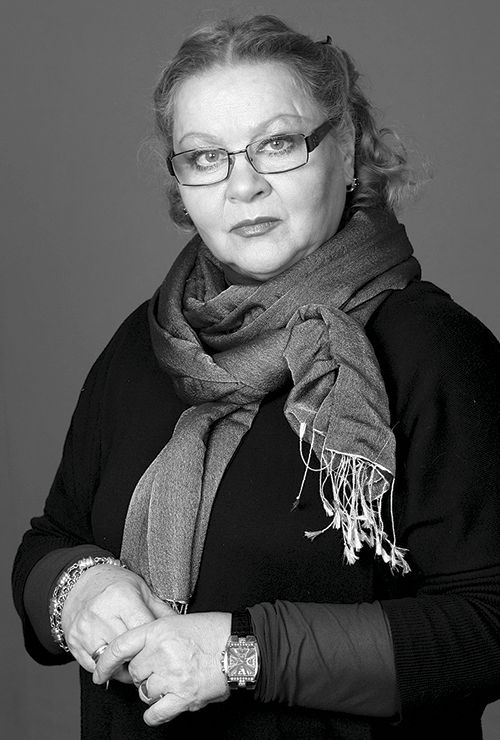 
Pesnyar is not a play for thrill seekers, being more for those who appreciate the subtlety of characterization. There is no predictable plot or dramatic battle; the heroes are not victims of intrigue. Pesnyar is for those who appreciate the inner conflicts of the human soul. Valentina Yerenkova’s production portrays with sensitivity not only the soul of the 1970s singer and composer Vladimir Mulyavin, but his experiences and reflections after a near fatal car accident. The play is brilliantly written, the language almost an ode to Belarusian, so native speakers will greatly admire it. Fans of the music of Vladimir Mulyavin and his ensemble will similarly be entertained.

I described my initial reaction to the play to Valentina, who responded by saying, “You have understood my main aim: the performance is not only about Mulyavin. Initially I struggled with the idea of focusing an entire play on one character. It became somewhat of a barrier to my own creativity. The breakthrough came when I began to broaden my thinking to other creative geniuses such as Kolas, Kupala, Aloiza Pashkevich and Bogdanovich. I realised that I could present the broader theme of creativity through this man, by demonstrating the soul of creativity, as well as the responsibility of the state and society to artists. Our Pesnyar is a performance about a musician who could be a member of any creative profession.”

To put simply, I admire him. The more I researched his music, the more I discovered that Vladimir Mulyavin is a great and often overlooked artist. I felt we had only really scratched the surface and know little about such artists. It’s thanks to people like him that the rich and beautiful heritage of our country has been popularised around the world. More than 56 other countries have become familiar with Belarus thanks to Pesnyary ensemble, which was called the Soviet Beatles. 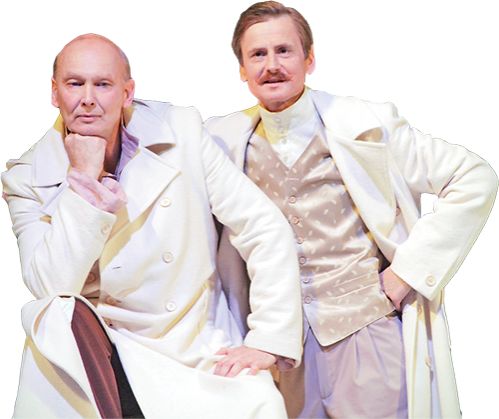 
The current season of Belarusian drama, which began with the Intimidated Apostle by Andrey Makayonok and Exeutioner by Alexey Dudarev, has been a hard act to follow. The theatre’s idea hamster, Olga Klebanovich, is partly responsible for the choice of Mulyavin, telling me how, running from a rehearsal, she bumped into Valentina, at her wits end as to which eminent and worthy citizen of Belarus to depict in her new play. Olga immediately suggested that none of the theatres had considered Vladimir Mulyavin, who would be a popular and pioneering choice for an evening of entertainment. She advised Valentina to start auditioning the nation’s great singing actors by asking them to read the poetry of the great Belarusian poets.

Valentina quickly moved to the idea for her play, and contacted popular Belarusian poet Leonid Dranko-Maysyuk, to put the idea to his son, who is a playwright. Together, they elaborated the play, devoted to the memory of Mulyavin, with Valentina eager to take a fresh approach (hence her choice of a new young writer).

She justifies her decision, saying, “Young people are courageous and inquisitive, unafraid to take risks and often overcome barriers easily. We’ve avoided putting anyone on a pedestal, showing them as having a full life; they’ve loved, suffered and created. This is a play about real life, light and dark, and the fact that we have a duty towards art and creativity, helping those who are talented.” 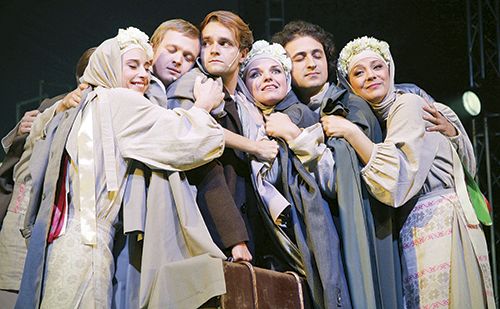 
Ms. Yerenkova likes working with young people and considers young Russian actors to be of the best quality; they are well trained, move well and are talented. She always prefers to work with those who are in tune with her, with whom it’s easy to communicate. She comments that it’s easier to solve conflicts when people are fundamentally on the same wavelength. In the leading man, Sergey Zhbankov, Valentina has found this connection. She predicts that he will be highly praised in the future for the role, as in his other works: he is organic and at one with the character, a true professional. Yerenkova, brought up in the tradition of respecting theatre, appreciates it being taken seriously as an art form by young actors. Apart from his intensity of acting, Zhbankov is musical and sings magnificently. The vocal performance of all the actors is strong, especially that of the men’s quintet, which is on the stage almost all the time.

Valentina is quick to praise Zhbankov’s professional attitude. She reflects on the prevalence of film and TV work, which, though necessary for actors, has taken something critical from their art. For Sergey, theatre is his first love, his priority, and for this he is highly respected. She tells us that she had cast the actor in the role in her head and may not have considered putting on the performance at all had he been unable or unwilling to take the role. Although he has other significant performances behind him, the part of Mulyavin is a major coup for which he hopes to receive acclaim. She has similar respect and admiration for the supporting actors in the play: Alexander Zhdanovich (playing Yanka Kupala) and Andrey Zakharevich (who plays Yakub Kolas). Between them, they bring vividly to life a varied cast of Belarusian heroes. Valentina tells us that their portrayal of these men has been a revelation to her. 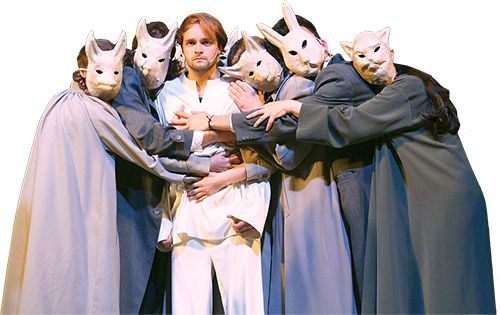 She is quick to thank Sergey Kovalchik, the Artistic Director of the theatre, for his understanding and judicious attitude to her as a director. With Pesnyar she has been allowed a free rein as far as casting is concerned: unusual for an artistic director. As well as the actors mentioned, the play involves other well-respected performers: Sergey Chekeres, Anna Malankina, Andrey Dushechkin, Ivan Streltsov, Anastasia Shpakovskaya, Veronika Plyashkevich, Yekaterina Shatrova, Yelena Stetsenko, Vladimir Glotov and Andrey Senkin. Valentina is particularly complimentary about the important part musicians play in the performance, telling us, “Their dedication has touched me deeply. Although the rehearsal workload has been huge, they have met with Mulyavin’s widow, Svetlana Penkina (who made an invaluable contribution to our research), and visited his museum.”

Producer Vladimir Tkachenko and composer Oleg Molchan, who worked with Vladimir Mulyavin and knew him well, contributed a lot to the project. The musical concept for the performance belongs to Valentina’s husband and colleague Alexey Yerenkov. Unseen backstage, he performs various accompaniments — including guitar and vocals. Alexey built the musical structure of the performance and adapted the play for a theatrical setting. Valentina adds that, although she is grateful for Alexey’s contribution, this was only made possible by the richness and quality of the original material written by Vasily Dranko-Maysyuk.

I ask whether the play has turned out to be everything Valentina envisaged; she replies that for a director there is never an end. A play is never perfect but it can be improved upon even at the last moment; it’s one of the pitfalls of the profession.