Guns focus on the west

Historians tend to incorrectly portray the early days of the Great Patriotic War as a chain of Red Army failures, where chaos reigned. Of course, our commanders and soldiers weren’t only retreating, fighting bravely on the Western front. Those events were truly impressive; the incredible fortitude of Soviet soldiers was to the fore.
Few know when the first tank battle of the Great Patriotic War took place. Studying military archives, I discovered two war shots, both featuring our crumpled T-26 tanks. The inscription read: ‘Soviet tanks damaged near Brest in 1941, their guns still focus westwards’. 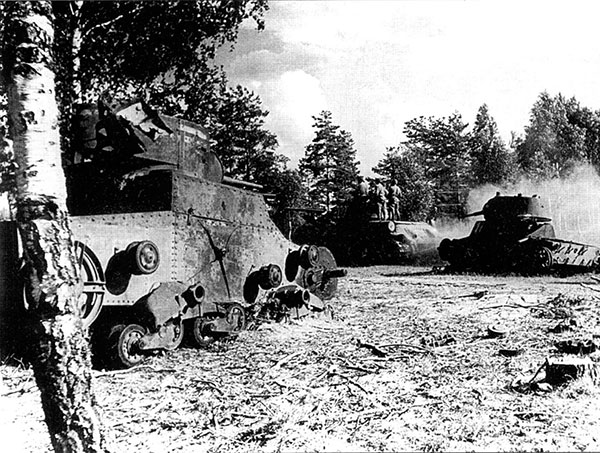 I decided to find the place where the photos had been taken, which was a challenge. General-Colonel Sandalov’s brochure, published with a small circulation and marked as ‘Confidential’ was devoted to the 4th Army’s border fights. For various reasons, it was long seen only by a limited circle of readers: mostly students of military academies.

Leonid Sandalov was the Headquarter Head of the 4th Army of the Western Front, protecting the most direct (and shortest) road to Moscow (along the Brest-Minsk-Smolensk line). On June 22nd, in the very first hours of the war, he went to the border front, heading to the town of Vidomlya on a T-26 tank, to meet the commander of the 30th Tank Division: Colonel Semen Bogdanov, aged 47. The latter was a former Tsar officer who had been freed from prison 18 months previously, having been granted amnesty from having taken part in a ‘military-fascist conspiracy’. Originally sentenced to death by firing squad, his punishment was abated and his crime recorded as ‘negligence in organising the division’s military preparations’.


Leonid Sandalov wrote: ‘At 12.30pm we arrived in Pelishche and, immediately came under attack from the major forces of the 30th Division’s tank squads. However, the enemy failed to sustain this and retreated to Vidomlya; squads of the 17th and 18th tank divisions of the Germans’ 47th Motorised Corps’.

With the help of my friends at Brest’s Rubezh (Border) Military-Historical Club, Andrey Vorobey, Yelena Vorobey and Alexander Zharkov, I visited the site of the battle last summer. This major crossroads now has a modern road junction. Having parked our car, we began investigating our surroundings, to find traces of the former tank fight. It seemed unlikely that we’d find anything, since so many decades had passed. However, Andrey found a heavy piece of metal: part of a T-26 tank track. It was clear proof of the struggle: a ‘steel document’. Holding it in my hands, I tried to imagine the encounter through the eyes of Colonel Sandalov. His military vehicle would have been standing not far away.

That was the beginning of the war: June 22nd, 1941. The 30th Division was leaving Pruzhany as two tank squads, with a total of 120 vehicles and two motorised rifle regiment battalions. On the Saturday-Sunday night of June 22nd, those tanks stayed in the forest, to the south-west of Pruzhany, allowing them to avoid losses. However, they were not so lucky on their way to the village of Poddubnoe, when German aircraft attacked their unprotected columns.

Soviet soldiers left around 30 damaged cars on the Pruzhany-Vysokoe highway and continued with the remaining 90 vehicles. At 11pm, two columns — led by Colonel Bogdanov — passed Poddubnoe, reaching the crossroads to the north of the village of Pelishche. German tanks met them halfway, after breaking the Soviet troops’ right flank at an angle. They were advance guards of the 17th and 18th divisions, commanded by German General Walter Nehring.

Soviet and German soldiers rushed out of the forest unexpectedly, facing each other along a 2km line, near Pelishche. A clover meadow and a field of oats separated them, with roads crossing from the north to the south and from the east to the west: from Kamenets to Zhabinka and from Pruzhany to Vysokoe. Christ, gazing down from a great copper and pine crucifix, cut a century ago, sadly observed the battle.

The tanks began the attack, exchanging hasty and inaccurate shots. Immediately afterwards, gun artillery joined. It must have seemed as if prehistoric apatosaurus and tyrannosaurus were fighting. Some fled their steel vehicles: on fire or covered in blood. The enemy began retreating to the forest until Junkers aircraft appeared, making vertically dives and driving back the 30th Division.

However, military fortune suddenly changed, with the aircraft leaving, allowing Bogdanov’s 2nd battalion to reach the crossroads, keen to go on the offensive. German commanders realised the new situation and ordered retreat to the west, to Vidoml, via the forestry highway. Around 90 burning tanks — German and Soviet — remained on the battlefield, below that roadside crucifix.

Thus ended the first tank battle of the Great Patriotic War but, sadly, success did not last long. Another German division approached from the north, targeting Pruzhany one day later. The resulting skirmish left only 60 of Bogdanov’s 120 tanks, which were obliged to retreat to the River Shchara, where they joined infantry units and the 22nd Tank Division. They headed to Slutsk, to defend the city but, by the end of June 28th, 1941, only two of Bogdanov’s T-26 tanks were still in action, alongside three tractors and several dozen vehicles.

After battles near Brest, Semen Bogdanov was sent to a dangerous section of the front, to command the Mozhaisk fortified district. He demonstrated his skills brilliantly, gaining appointment as Deputy Commander of the 5th Army of Tank Troops. A few months later, he led the 12th Tank Corps. He fought on the fieriest fronts, including Stalingrad and the Kursk Arc (where he led the 9th Tank Corps) and took part in Operation Bagration, to liberate Belarus, commanding the 2nd Guards Tank Army. He later fought to liberate Brest, seeing once more his wrecked tanks (which had remained sitting at the crossroads since that memorable battle on June 22nd, 1941). The Germans did not utilise them, as they were situated too far from the railway. It was his personal military circle of fire: from Brest and back again.

Later, Bogdanov took part in the ‘Pomeranian Shaft’ and fought for the Mazeritsky fortified district (near Oder): the largest of such a kind in Europe. It was there that the ‘camp of the earthworm’ was situated. Finally, he participated in the taking of Berlin, his tanks standing by the Brandenburg Gates on Victory Day. By that time, the famous general had been awarded two Gold Stars, four Orders of the Red Banner, an Order of Suvorov (of both degrees), countless medals and, even, the medal of an Honorary Knight Commander of the British Empire.
On June 1st, 1945, the former Tsarist army lieutenant, who had fought in World War I, Semen Bogdanov, was awarded the title of Marshal of the Armoured Forces. Sadly the Victory cost him his only son, Rostislav (who died on the frontline) and his three brothers and sister. Semen was wounded four times but, like his opponent in his first battle, General Walter Nehring, survived.

In March 1942, Semen was sent to Africa, where he headed the German African Corps and commanded German troops in Tunisia. The acute situation on the Eastern Front required the service of the best generals. His old rival, Walter Nehring, headed a tank corps near Vinnitsa. They may well have clashed on those new battlefields, and in the battle for Berlin. As Soviet General Bogdanov saluted to the Red banner flying over the Reichstag, General Nehring was sitting in the American camp (as Soviet Semen Bogdanov once did). At the whim of Fate, they were almost equal again. Twice Hero Bogdanov’s criminal record was never rescinded in his lifetime but he was rehabilitated by the Plenum of the Supreme Court in 1968, seven years after his death.

To commemorate the memory of Marshal Bogdanov, his bronze bust was unveiled in St. Petersburg and streets in Moscow, Sevastopol and Pruzhany were named after him. A street in German Stadtallendorf commemorates Walter Nehring: General Nehring Strasse. After he was released from US custody in 1948, the former military leader made a successful career in civilian life. He outlived his Russian rival, dying in 1983, in Dusseldorf, at the age of 90. Bogdanov died in 1960, aged 66. Of course, it is not how long we live but how we live that is important. Semen Bogdanov lived a worthy life. Let us remember him!