Many outstanding and talented people have lived and worked in Grodno Region, which boasts lands rich in history and traditions.  Sites similar to Zalesie are found region-wide, inspiring local authorities to restore them to life, often with investors’ help. 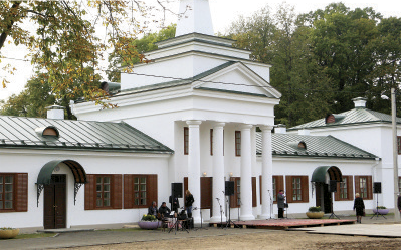 Culture Minister Boris Svetlov notes of Oginski estate that he’d like to see it not just revived but ‘filled with people, hosting concerts and musical parties, and attracting tourists from abroad’.

According to the chief architect heading restoration, Lyudmila Ivanova, the house`s exterior is now complete, but the interior has only enjoyed fragmented restoration: structural works, new windows, doors and roof, and heating and ventilation installed. The stairs, facades and flooring have all been replaced.

The building now closely resembles its original appearance (when owned by famous Michal Kleofas Oginski) thanks to documents in historical archives. Since the interiors were ‘lost’, inventory descriptions and eyewitness recollections were used. Engravings (featuring Zalesie) helped, including works by Napoleon Orda. As a result, Oginski’s study, the large and small sitting rooms and a billiard room have been fully restored. The large music room, with its stage, is almost exactly as it once was, and guest rooms for tourists have been prepared in the left wing, while the enclosed court is now ready to host concerts.

Work continues of course; still the greenhouse, the clock tower with bell (as depicted in Orda’s engraving) and furniture (to order) are needed. Next year, the orchard and the park will receive attention, alongside outbuildings.

Since 2011, 200,000 Euros have been allocated as part of the Latvia-Lithuania-Belarus trans-border co-operation programme to reconstruct the estate. In addition, the project has received around Br25bln from the Republican budget. All works should be complete by 2015: the 250th anniversary of the birth of the man who composed the Farewell Homeland polonaise.

Famous public figure, diplomat and composer Duke Michal Kleofas Oginski lived at Zalesie estate for around two decades (1802-1822), composing his most popular polonaise — Farewell Homeland. At that time, the estate was a true cultural centre, attracting musicians, composers, poets and artists, who called it the ‘Northern Athens’.