The Belarusian Automobile Works, in Zhodino, has developed and manufactured the most powerful mine dump truck in the world: the BelAZ-75710. This once again confirms its leading position globally. In 2014, the vehicle established a record load capacity of 504 tonnes, as recorded in The Guinness Book of Records. 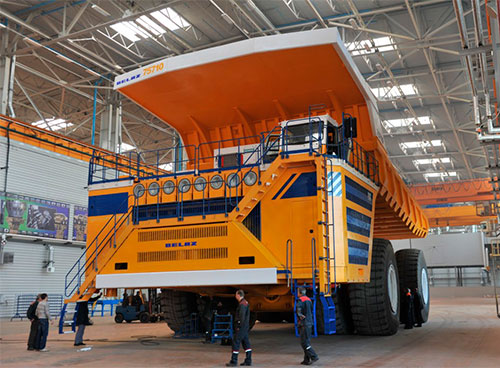 More than 200 Belarusian mine dump-trucks operate in Siberia


Developers advise only loading to 450 tonnes during constant operation, but this still surpasses the capacity of any other such vehicle worldwide. Of course, designers and customers need to see how the giant performs in ‘the field’ so, last year, a prototype was delivered by train to Russian Kuzbass, for trials with KuzbassBelAvto enterprise. The results enabled the vehicle to be tailored for best performance.

Since last November, BelAZ-75710 has been undergoing strict trials at the open-cast coal mine in Chernigov, working day and night with a full load. The Deputy Chief Designer of BelAZ, Leonid Semenov, receives a daily report on performance. He tells us, “The vehicle has already made more than 2,000 journeys, covering over 10,000km, and transporting cargo of about a million tonnes. Our designers at the Scientific and Technical Control Centre and our representatives in Kemerovo Region have observed constant reliability, while solving all problems quickly, feeding into the manufacturing process for the chassis. Initial results allow us to say with a high degree of certainty that the 450-tonne vehicle will work as reliably as our other mine dump trucks, but with greater efficiency.”

A second BelAZ-75710 is now being produced at the Belarusian Automobile Works, soon to display its capabilities before a panel of customers, dealers and scientific institutions, in Zhodino. BelAZ has already made the frame for the third  vehicle of such a kind, but it may be likely that full-time production will move to BelAZ’s Russian partner site.

Several enterprises are showing interest in BelAZ’s latest heavy-loader, including Severstal. The Russian company recently ordered two 220-tonne trucks for its Karelsky Okatysh JSC subdivision, which have been in operation since December. These join over 200 Belarusian mine dump trucks, self-propelled rollers, and water-sprinkling vehicles. Since the first Belarusian mine dump-trucks appeared 30-40 years ago they have been endlessly improved, to reflect the needs of their working environment.