Genes will reveal all


Our genes contain the information able to help us solve tasks earlier deemed impossible, especially in the fields of medicine and criminology. Belarusian and Russian scientists have already conducted major work and the new DNA-Identification Union Programme aims to unite their efforts and potential further. 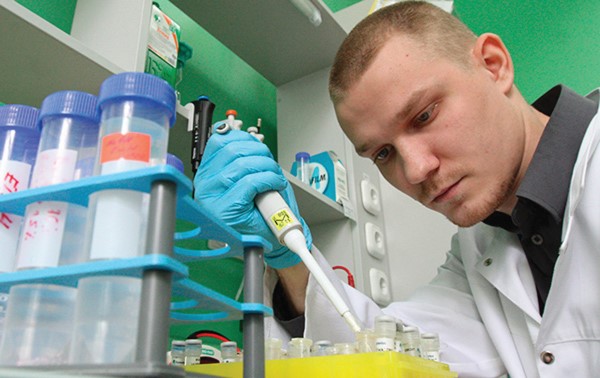 
Launching at the beginning of 2016, notes the State Secretary of the Union State, Grigory Rapota, it will receive 3 billion Russian Roubles from the Union State budget over a period of five years. Returns are expected to be considerable: for criminologists, doctors and, of course, geneticists.

We know that it’s impossible to commit a crime without leaving any biological trace, since DNA can be extracted from a droplet of saliva, blood or sweat. Doctor of Biological Sciences, Professor Irma Mosse, who heads human genetics at the Belarusian NAS Institute of Genetics and Cytology, says that 75 percent of our characteristics are determined by our genes: our appearance, character, health and intellectual and physical abilities. DNA-technologies can easily be used to tell our sex, age, skin and eye colour, and ethnicity.

One of the initiators of the programme is the Investigating Committee of Russia, which wishes to use DNA analysis to help in solving crime. Two recent high-profile cases in the Russian Federation used DNA to help find those responsible. Following an act of terrorism in Domodedovo, the remains of the suicide bomber were used to identify his ethnicity. This information allowed investigators to locate his likely place of residence and his accomplices. Meanwhile, a murderer in Tomsk was identified by biological traces left on his victim.

Belarusian criminologists have their own methods of DNA-identification, as do the Russians, for example, in defining age. The new Union programme aims to encourage information exchange with the State Committee of Court Expertise of Belarus and between the Investigating Committees of our two countries. A single database of genetic data is to be created, covering all ethnicities living in Russia and Belarus. Of course, our border is always open.

The Director of the Vavilov Institute of General Genetics of the Russian Academy of Sciences, Doctor of Biological Sciences Nikolay Yankovsky, explains that the database should help investigators in narrowing down their search for suspects. DNA samples can even be used to define the birthplace of a criminal, down to their individual settlement. Naturally, a huge amount of data is needed and previous efforts have only been fragmentary. The finished database will cover all regions of Russia and Belarus. The Investigating Committee is sure to find uses for it in its daily work.

According to the Deputy Head of the Central Administrative Board of Criminology, of the Investigating Committee of the Russian Federation, Sergey Ryabov, within five to seven years, the Union State will be among the world leaders in applying genetic research to criminology. He describes the new programme as using ‘innovative gene-geographical and genomic technologies to identify personality and individual characteristics, from the gene pools of Union State regions’.

The second major direction of the DNA-Identification Programme is application in medical practice. Nobody doubts the need to treat patients individually, by personalising medicine, and adopting preventive measures by identifying those most-likely, genetically, to suffer from particular diseases.

Genetic analysis is essential, as Prof. Mosse explains. The NAS Institute of Genetics and Cytology is liaising with the Belarusian Scientific and Practical Centre of Cardiology in treating cardiovascular diseases, sharing information on why some patients react badly to certain medications (such as blood thickening and thrombosis, or blood thinning). Such matters are vital during heart transplant surgery, having grave consequences. Accordingly, scientists are defining genotypes linked to certain reactions, to determine medication suitability and dosage.

In deciphering the human genome, the prospects for medicine are vast. Sports genetics are developing in Belarus and Russia, since athletes bring prestige. Parents can discover whether their child has sporting potential at the NAS Institute of Genetics and Cytology, by finding out if the child`s body can cope with surplus loading. The genetics of intelligence are still little understood but are receiving attention. Prof. Mosse is sure that, in the future, it will be possible to define the abilities of a child from the earliest age: their propensity towards science, the arts, performance or cooking. No preference is random!

Resistance to stress can also be explored genetically, which is important both for athletes (who have enormous physical and emotional stress during competitions) and for those in demanding jobs: divers, rescuers and cosmonauts. Genetics will be able to reveal psycho-emotional qualities, such as levels of aggression, temper, courage, and ability to resist stress. Results will help show who is most suitable for ‘dangerous’ jobs.

The DNA-Identification Union Programme 2016-2020 covers ten directions of research: five in the field of medicine and the same for criminology.