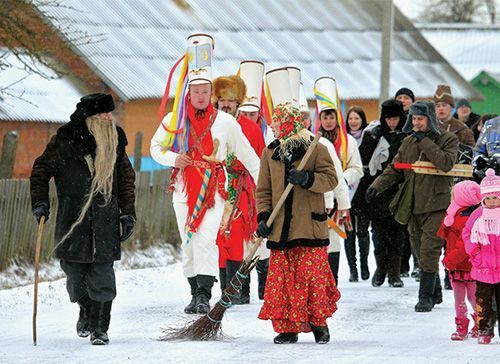 Ethnographers from around the world know this village well. On the eve of the Old New Year (following the ancient Julian calendar), residents celebrate Shchodry Vechar (Generous Evening) in Kopyl District’s Semezhevo. The village becomes an open-air theatre, with true mysteries performed, transporting villagers back in time, when bright carnivals and torch-lit processions were common.

The ‘Tsars’ custom is unlike any other. It begins with the proclamation of ‘The Tsars are coming!’: sure to surprise visitors. A matronly female villager then appears from behind a house, clearing the street of snow with a broom, and followed by a group of soldiers, marching proudly with fake sabres on their belts. These warriors are the ‘tsars’ although their clothing is only vaguely the 19th century Russian military in style, since they wear party hats rather than hussar caps for their promenade.

It’s thought that the ‘Tsars’ Kolyady custom came to Semezhevo in the time of Belarus being part of the Russian Empire, brought by Imperial soldiers, among whom the drama was popular. However, nobody knows for sure. The participants wear linen shirts and trousers, traditionally embroidered belts, bearing geometric motifs, and high boots (inherited from their forefathers who lived in Soviet times or hired from modern Belarusian soldiers). Meanwhile, their caps boast fluttering ribbons, like those worn by Ukrainian ladies. Such mixtures of style are common for a theatrical performance.

The staging of the Tsar Maximilian drama is central to the Generous Evening in Semezhevo. In the past, it was performed in many Belarusian villages, as well as across Russia and Ukraine, with a plot inspired by the theme of steadfastness in the face of opposition. The story tells of ancient tyrant Tsar Maximilian, who commands his son to refute the Christian faith, much to the young man’s disgust.

Drums are beaten at midnight, and every resident is to be found on the street, enjoying the festivities. Villagers visit each other and treat the ‘tsars’, giving them gifts after their performance. Tatiana Shaura, the Director of the Semezhevo Centre for Culture and Leisure, tells us, “Each group walks through the village, comprising 12 people: seven ‘tsars’, in addition to a baker, a Mekhanosha, a musician, a grandfather and a grandmother. Unmarried men perform these characters, as is traditional, although single young men were kept at home usually on festive days, to prevent them from entering girls’ houses. All seven ‘tsars’ are placed according to height, with the tallest heading the group (standing for Tsar Maximilian), followed by Mamay and the others. Some groups have been performing in our village for several years, although the revival of the custom began with a single group. Many years ago, each Semezhevo street had its own ‘troupe’.”

It’s hard to imagine that, in the late 1990s, the Kolyady ‘Tsars’ custom was close to dying out. However, in 1997, folklore experts from the National Academy of Sciences came to the village to encourage local residents to revive the celebration. In fact, it is the only place worldwide to currently practice the tradition. These days, the Semezhevo Centre of Culture and Leisure oversees the event, with its own Tsars troupe, which has received the Belarusian President’s Special Award (recognizing figures of culture and art for their great work in the study, revival and protection of folk traditions).

The ‘Tsars’ custom is an intangible historical-cultural treasure of Belarus and is on the country’s State List of Historical-Cultural Treasures — as well as being on UNESCO’s List of Intangible Cultural Heritage. The custom has inspired Semezhevo villagers to feel pride and, importantly, has exalted our national culture globally.

On the second day of Christ’s birthday (in line with the Christian tradition), the district Kalyady Fest is celebrated in the agro-town of Molotkovichi (Pinsk District). Residents of Molotkovichi, Sadovy and Domashitsy heartily welcome guests for the event.

The custom of ‘Tereshka’s Wedding’, in Lepel District, brings together young people for the purpose of courtship and is included on the State List of Historical-Cultural Treasures. It is widely celebrated across several villages: Selishchi, Stary Lepel and Bolshoi Polsvizh.

Several years ago, the village of Pogost (Zhitkovichi District) appeared on the CNN TV Channel’s list of top places to celebrate the New Year and Kolyady. Guests can try koliva and learn the local skill of straw spider and mask making.

A wonderful venue for hosting major Belarusian folk holidays is situated near Minsk, at Strochitsy’s Belarusian State Museum of Folk Architecture and Life (a skansen). Guests can tour rare wooden houses assembled from across the whole country and take part in folk games, enjoying the authentic atmosphere of a 19th century Belarusian village. Regardless of your religious faith or nationality, you cannot help but be intrigued by the unique houses, Roman Catholic and Orthodox churches, and neighbouring fields and forests. People from all over the globe have already made the trip.