Over 6,000 partisan units and underground groups operated during the Great Patriotic War, in enemy-occupied territories

Front beyond the front line

Over 6,000 partisan units and underground groups operated during the Great Patriotic War, in enemy-occupied territories. More than a million such ‘volunteer avengers’ took part in hundreds of exploits, blowing up bridges and derailing trains. 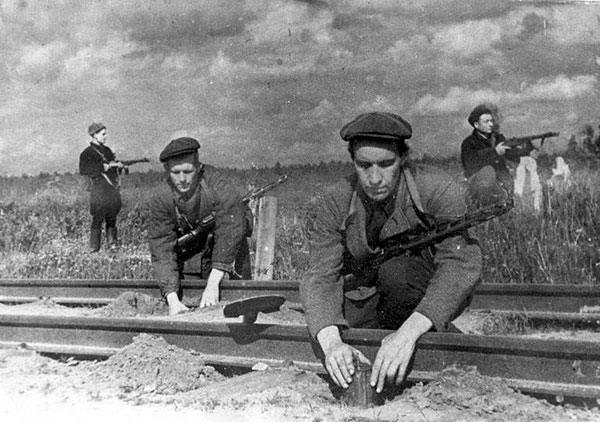 German soldiers called them the ‘forest front’ and often feared them more than the fighters on the main front. They were known for their elusiveness, and for taking ‘revenge’ upon Nazi troops who brought punishment down upon villages. They enjoyed public support everywhere, bringing strength and invincibility. For their dedicated and skilful work, showing courage and heroism, more than 311,000 partisans were awarded with orders and medals and 248 people received the title of Hero of the Soviet Union.

Few realise that the first partisan unit during the Great Patriotic War was established in Pinsk, on the evening of June 22nd, 1941. That morning, legendary partisan Vasily Korzh asked the First Secretary of the Pinsk Regional Committee, Avksenty Minchenko, for permission to establish a partisan group. Minchenko initially responded in the spirit of pre-war propaganda, urging that the Red Army would fight back on the Bug River, and that battles would only be fought on foreign soil; by that evening, his assessment had dramatically changed. A small detachment of volunteers was created and extra weapons distributed from the District Military Enlistment Office.

On June 28th, the partisan group joined its first battle. Germans had occupied Pinsk, inspiring Korzh to move his group along the Pinsk-Logishin tract, to Ryaboi Bridge (through Yaselets), where they ambushed the Germans’ light tanks. The commander ordered that his men remain at a distance and throw grenades but the Instructor of the City Committee of the Party, Salokhin, managed to throw several grenades under the first tank. The partisans then opened fire on the observation slits, inspiring the second tank to turn back. They removed the weapons from the first tank and captured the crew. During interrogation, the Lieutenant couldn’t believe that his tank had been knocked out by civilians, declaring “This is against the rules; I won’t surrender myself to be a prisoner of civilians. Take me to military command.” 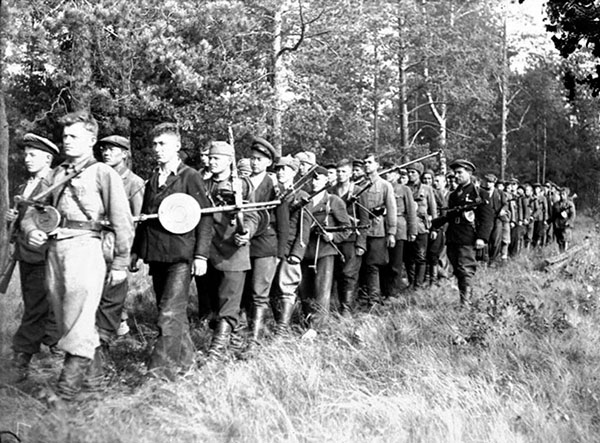 From July to September, 1941, the partisan group was unable to engage major military units in combat, lacking weaponry, ammunition or forces. However, they conducted ambushes and attacked single vehicles, including motorcycles. They destroyed communication lines and burned bridges, striking vital blows and causing panic among the enemy. Moreover, their actions helped raise the spirits of those who remained in occupied territories.
The propaganda of Goebbels daily trumpeted: ‘The Red Army is broken. Stalin has fled the capital. The Great Reich is invincible.’ Those who were fainthearted gave up, cowardly deciding to serve the Nazis. Those who were courageous and honest clenched their teeth and, having collected their will into a fist, fought back. Partisans not only fought the enemy but gave hope of winning.

From January 1942, at the junction of Minsk, Pinsk and Polesie regions, a partisan zone began to form and was soon the size of an average European state. The Nazis couldn’t conquer this peculiar partisan republic. In the zone covered by partisan commandants, order was brought to villages, allowing collective farms to operate and children to attend school. With their permission, partisans were then allowed to receive food, horses and other provisions.

War against the rules

The tactics of partisan warfare don’t fit military canons and appear to be full of adventure and bravery but, of course, they were no more than the actions necessary at the time and in the circumstances. They were defiant, refusing to be conquered, using anything available to fight: even pitchforks and axes. They also helped well-armed parts of the regular army ‘meet’ the enemy. That they broke the rules, doing what was necessary to survive and strike blows to the enemy is undeniable. The ends justified the means.

In February 1942, the first major partisan raid took place upon the districts of Lyuban, Starobin, Slutsk, Krasnoslobodsky, Starodorozhsky, Gantsevichi and Zhitkovichi. Units under Komarov, Rozov, Patrin, Stolyarov and Konstantinov crossed several hundred kilometres, inducing fear and panic among the enemy as they crushed garrisons. Their success inspired many to join them, especially young people and those who had escaped captivity. From each battle, they salvaged enemy weapons, ammunition and food, gaining the advantage by refusing to follow ‘patterns’.

Walter Scott wrote that to try to surround partisans is like carrying water in a sieve. Army officers would assess a situation on a map but partisans did not rely on roads, often using small paths, through which they slipped unnoticed. Neither Napoleon nor Hitler, with their powerful armies, could conquer partisan brigades.
A couple of weeks after John F. Kennedy became the President of the USA, journalists came to his office and noticed a copy of Che Guevara’s book on his desk: writings on Irish ‘guerrilla’ warfare. Mr. Kennedy explained that he wanted to understand the essence of ‘partisan’ tactics, to help shape the USA’s response to Vietnamese ‘guerrilla’ warfare, which was ousting them from the country.

Pinsk’s partisans showed maximum efficiency during the war, with eight teams by 1944, who killed about 27,000 Nazis and defeated more than 60 major enemy garrisons, as well as derailing about 500 trains carrying men and military equipment. They blew up 62 railway bridges and about 900 road bridges but their main achievement was in diverting enemy forces from their ‘real’ goals.

According to the German General Headquarters, on October 1st, 1943, about 52 divisions were battling the partisans, trying to protect military facilities. In comparison, after the opening of the second front, Hitler sent 50 divisions against our allies. Zhukov’s evaluation of the partisans reads: “The enemy troops’ command had to create a second front to fight partisans, which distracted a large force of troops and seriously affected the overall state of the German front, ultimately affecting the outcome of the war.”