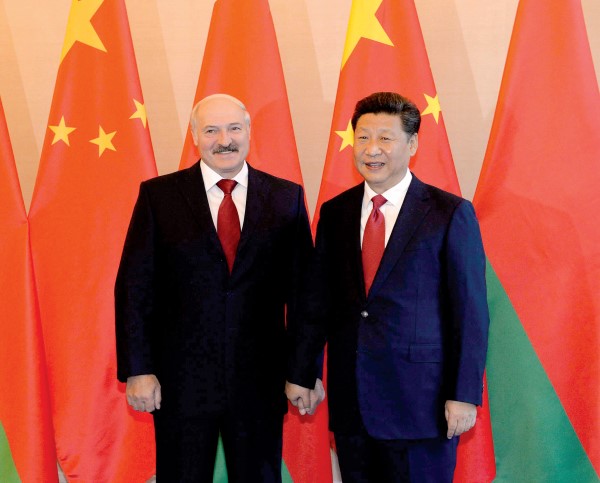 
The heads of state enjoy strong and sincere friendship, as is well-known. These warm and trustworthy relations are strengthened by the two heads of state’s friendship, as was mentioned by the First Deputy Prime Minister of China’s State Council, Zhang Gaoli. Mr. Lukashenko met the official several hours earlier, with the representative of the Chinese Government (who is responsible for economic affairs) assuring the Belarusian President that he would do everything possible to help realise the many agreements.

Over the past four months, Mr. Lukashenko and Xi Jinping have met three times: a rare case in diplomatic practice. This vividly demonstrates the high level of their mutual relations. The leaders spoke not only of their common views on the results of WWII (a common thread through all jubilee celebrations). Retrospective defines perspective. Our countries aim to continue serious interaction. Mr. Gaoli has called Belarus ‘an iron partner’ and Chairman Xi Jinping has agreed.

Such an opinion is based on strong historical logic. The Belarusian President paid his first visit to China in 1995: his first official tour to a state outside the USSR as Head of State. With this in mind, Mr. Lukashenko can assert that Minsk is more than an opportunistic partner for Beijing. China appreciates this, especially taking into consideration the fact that, at present, the country is restoring global political and economic multi-polarity. Plenty of states are eager to make friends with China but Belarus made its well-grounded choice long ago.

A landmark event confirms Belarus’ correct decisions of the past. On August 31st, Mr. Lukashenko signed Directive #5 ‘On Developing Bilateral Relations between Belarus and China’ which — as the Deputy Head of the Presidential Administration, Nikolai Snopkov, notes — was not timed to the visit but prepared as part of the May decisions, made during Xi Jinping’s visit to Minsk. The events coincided, which is a good sign. People in the East appreciate signs and we — Belarusians — also treat them with respect and understanding. There are no doubts that a clear future is guaranteed along this path.

Directive #5 indicates that Minsk is focused on the development of relations with Beijing, and China is reciprocating. Mr. Lukashenko thanked the Chinese Head for this, and for investments and credits allocated for major infrastructure projects. Much has already been done to construct the Great Stone Belarusian-Chinese Industrial Park (called by Xi Jinping ‘a pearl’ of the Silk Road). “This will be a unique project,” Mr. Lukashenko said and his Chinese colleague agreed, saying, “The Great Stone is a joint project; we can create a bright example with the initiative of the Silk Road’s economic belt.”

Xi Jinping congratulated Belarus on its observer status at the Shanghai Co-operation Organisation, expressing China’s desire to support regional integration projects. “I understand your anxieties over the global situation. It’s not simple,” he said. “Many countries face difficulties of development. The situation is slightly better for our country. Proceeding from principles of strategic partnership, we’re ready to support Belarus.”

Xi Jinping wished Mr. Lukashenko all success at the forthcoming elections, expressing confidence that our nation will make a wise decision. He added that he would expect a new official visit of the Belarusian President to China.

Nikolai Snopkov, the Deputy Head of the Presidential Administration, comments on Directive #5:

Documents of the kind are rare. They define the key strategic avenues of society’s development. It’s been adopted as a continuation of the decisions made during Xi Jinping’s visit to Belarus in May. The document is based on major negotiations and focuses on avenues of strategic partnership, which should strengthen both states

Victor Burya, the Ambassador of Belarus to China:

During this visit, much attention was paid to issues of economic interaction, focusing on spheres of potential mutual support. Talks with China’s Chairman and the First Deputy Prime Minister of China’s State Council indicate that we share common interests. Xi Jinping confirms that our states are mutually supplementary and China is ready to assist Belarus in its economic development