On March 22nd, 1943, German Fascists destroyed the Belarusian village of Khatyn, burning 149 alive — not only women and the elderly but 75 children, including babies 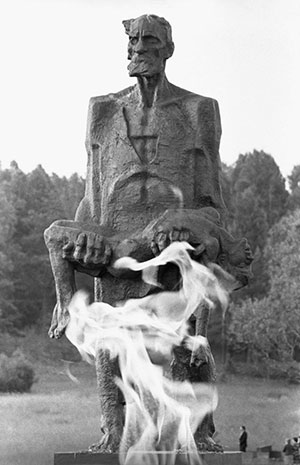 Each year, the Khatyn Memorial Complex is crowded on this day, with many wishing to mark this sorrowful aspect of Belarusian history. Khatyn symbolises the torture and suffering experienced during the dark years of occupation. Young and old gather to remember together the awful events of 72 years ago. It may seem a ‘lifetime’ past but the horror witnessed by that small forest village and its residents continues to have the power to freeze our hearts. Hitler’s soldiers are thought to have killed over 1.4m people across Belarus: via concentration camps, ghettos, burnt villages and bombed houses.

Celebrations last year marked the 70th anniversary of Belarus’ liberation, including the release of two collections of archive materials. One is entitled Khatyn: Tragedy and Memory (part of the Archive. History. Memory series) — impressively uniting almost every document known on the destruction of the village and its residents. Meanwhile, Khatyn Nekropolis offers readers complete information on other Belarusian villages which shared Khatyn’s fate. Published jointly by the Justice Ministry’s Department on Archives and Record Keeping, the National Archives, the State Security Committee’s Central Archives and Khatyn State Memorial Complex, the series has only a small issue, making the editions rarities.

On March 22nd, 1943, as two troops from the 1st squadron of the 118th police guard battalion were sent to restore a communication line broken by partisans, between Pleshchenitsy and Logoisk, they were ambushed by the Avenger partisan troop. Besides wounding several men, the partisans killed Chief Commander Hans Welkeе-Hauptmann — a favourite of Hitler and an Olympic champion, alongside two policemen. As a result, SS-Sonderkommando Dirlewanger was sent to exact inhumane revenge, selecting Khatyn.

Khatyn villagers were buried on the third day after the tragedy, their grave marked by three crosses. These remained long after the war, protecting and cherishing the memory of those killed. Later, the crosses were replaced by a simple obelisk in the form of a wooden pyramid, bearing a red star. In 1964, the Groaning Mother monument was erected and, on July 5th, 1969, Khatyn Memorial Complex opened, designed by Belarusian architects Y. Gradov, V. Znkovich, L. Levin and sculptor S. Selikhanov — a People’s Artist of the BSSR.
Perhaps the first archive document on Khatyn was recorded by Kamenka Village Council, in Minsk Region’s Pleshchenitsy District. It details the burning of Khatyn, reported by villagers from Selishche, and is dated March 25th, 1943. It states:

‘Seven people from Selishche village prepared a report in the presence of partisans, stating that, on March 22nd of the above mentioned year, German monsters attacked the neighbouring village of Khatyn and burnt all its houses. 150 of its residents were savagely tortured and burnt’.

From the order of the Head of Reichskommissariat Ostland’s Operative Headquarters about the launch of fighting against partisans in Belorussiya’s General Commissariat. November 18th, 1942, Minsk:

...Upon the order of the Reichsführer-SS plenipotentiary on fighting partisan troops, Obergruppenführer-SS gives heads of punitive groups permission to independently decide whether to burn down villages, or evacuate or kill residents… Take on this difficult police task with the desire to clean Belorussiya’s General Commissariat of partisan troops and bring peace to this area.

Iosif Kaminsky — a Khatyn villager, born in 1887; his four children and wife died in the fire:

...When I came to the barn, I saw ten people — including my family. I asked why they were undressed and my wife Adeliya and daughter Yadviga replied that the Fascists had taken their clothes. People were being brought continuously to the barn so that, in a short period of time, it was completely crowded; it was even impossible to raise a hand. The barn was 12x6m… From inside, we could see that many houses were already on fire. I realised that we would be shot so I told all those in the barn, “Pray to God, as everyone will die here…”


...Ordinary villagers were brought to the barn, including many small children and, even, newborns. Most were women and old people. With my 15 year old son, Adam, I stood by the wall: those killed were falling upon us while those alive tore around in waves. Blood flowed from those killed and wounded. The roof fell in, strengthening those terrible, wild cries. Those aflame cried out horribly and thrashed about under the roof such that all seemed to spin. I managed to crawl between corpses and burning people, to reach the door. A Fascist standing near the door shot me with a gun. My burning son, Adam, somehow ran out of the barn but was brought down after about 10m. I was wounded and chose not to move, to avoid being shot again. Many people, dead and burnt, were evident near the barn. Some time later, I heard a signal for the Fascists to leave. After they had driven away, I heard my son Adam, who lay about 3m away, calling for me to take him out of a puddle. I crawled closer and saw that he was virtually cut in half by bullets. Adam asked me whether his mother was still alive and then, immediately, died.