Force in truth and unity

People speak as much about the ‘Minsk — Hero City’ exposition as about the new building of the museum of history of the Great Patriotic War. After becoming acquainted with halls and exhibits, I will tell about them. They are strikingly different from the former on Independence Avenue. They are notable for their information value, emotional background, deep content and blameless plot logic. Presidents Alexander Lukashenko and Vladimir Putin took part in the opening of new museum. 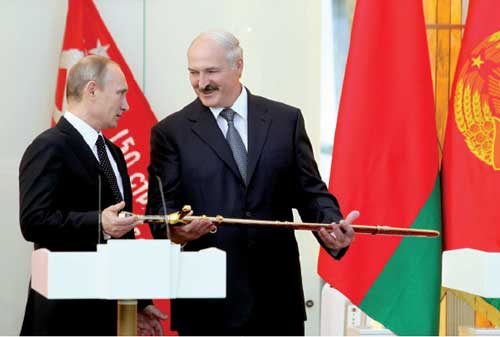 It is difficult to describe the event, which is necessary to see. I came through the exposition of the museum twice;firstly, with the trip for journalists. I noticed that, from the very beginning of our looking round, the expressions of our colleagues from the Kremlin pool changed dramatically. Their professionally retentive and brisk gazes became suddenly quieter. The eyes of our colleagues moved along exhibits with improbable curiosity, real rarities of those hard times. Experienced reporters, who had seen a lot in their lives, asked the guidea lot of questions. About many details of wartime that they had obviously learnt for the first time — about guerrilla life, the anti-fascist underground and the scale of Nazi atrocities. Colleagues were very impressed by everything they saw and the information which was new for them...

The two Presidents also listened attentively to the guide. For a moment they stopped before the hall that talked about the Nazi genocides organised on Belarusian land. This dramatic segment of the exposition is made in a very technological way. A body of flame is projected on a thin veil of artificial fog. On their background emerge the names of Belarusian villages which were wiped out. It sends shivers down the spine and lumps appear in the onlookers’ throats. The history here revives and burns...

But, I will say once again, it is necessary to see all these for yourself. Each exposition is accompanied by video effects and sounds which allow to you feel the essence and meaning of the given theme. From time to time, the Presidents exchanged short remarks between themselves and with the guide. It was visible, that during these moments, they thought about the same thing. It was confirmed by the words told by the Presidents in the Hall of Glory.

Under the glass dome, symbolising the prostrate Reichstag, the Heads of State spoke about the general victory. How our fathers, grandfathers and great-grandfathers somehow, by superhuman effort, gained this victory, and how the present generation have had to protect it again from revisionists of history and direct falsifiers. As if the Nazis of the 40s have tried to run into the consciousness of people. However, at first they tightly stuck in our strong memory, and then met with a rebuff of disapproval of their cynical fabrications. According to Alexander Lukashenko, memory is truth, and in truth, there is force.

The truth is that, having occupied Belarus, the enemy was not able to conquer our people. We paid the highest price for this firmness, one in every three died. The defeat of Hitler’s men on the Eastern front determined the outcome of the Second World War and even all post-war world order. Other western countries, whose soldiers in the style of the Wehrmacht and SS units left their dirty footprints on our land, killed children, try today to speak with us haughtily using the language of dictatorships and sanctions, instead of expressing gratitude and true repentance. Today, they are supported by primitive pseudo-historians, who try to depict traitors as heroes and aggressors as liberators. It will not work! We deliver a resolute rebuff to historical marauding. And again, as well as 70 years ago, we do it together. Belarusians are shoulder to shoulder with Russians.

The Presidents left records in the book of distinguished guests of the museum, presented the museum with a sword ‘To Minsk Hero City’. Gunsmiths of the Ural Zlatoust had engraved Alexander Nevsky’s popular quotation: ‘The one who will come to us with a sword — will die from that sword’ on the blade. Vladimir Putin donated historical periodical press with news about the liberation of Minsk. Chords of the Victory Daymarch sounded in the hall. The chorus had scarcely sung the first notes, when the clouds disappeared over the transparent dome and the light hall of Glory began to sparkle even brighter. It was all very symbolic.

Dialogue in the spirit of brotherhood

Having left the museum, Alexander Lukashenko and Vladimir Putin went to the Palace of Independence,where they had working meeting, the eighth meeting this year. A lot was said about what unites us. The President of Belarus welcomed his Russian colleague.

“We very much appreciate your arrival in these holidays. They were hard times, but all the same, the Victory after all the difficulties was desired and general. As I once already said when I was worn out here by separate people.‘Do not worry, if it is necessary, we will stand back-to-back and we will defend ourselves, we will fight, as we once did together.’”

Alexander Lukashenko thanked Vladimir Putin for his arrival and for the help and support rendered to the economy of Belarus. The world crisis has affected both countries. But it is easier to overcome its consequences together. The President expressed confidence that, by being together, both countries will be economically much stronger.

Bilateral trade and economic co-operation became one of the main themes of the meeting of the two Presidents. Following last year’s results, Belarusian-Russian goods turnover was almost $40 billion. It is rather a big figure, but the growth potential is not exhausted. Vladimir Putin assured that Belarus and Russia will combine efforts further on economic integration. It is not only about an increase of volumes of economy of the states, but also about its qualitative growth. The Russian President noted that much in this direction could be done by the Eurasian Economic Union.

“It will be another step forward in combining the efforts of our people and our states on the basis of everything positive that we received in former times and was made by the hands and watered by the blood of our ancestors, fathers and grandfathers, if we mean wartime.”

In the evening Vladimir Putin and Alexander Lukashenko laid a wreath at the Victory Monument. 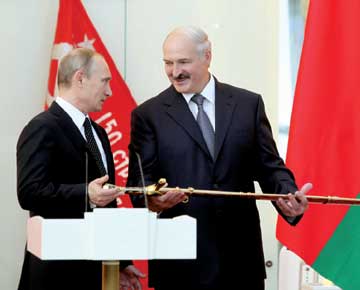