Belarus venerates the memory of all victims of the Great Patriotic War, as confirmed at launch of Trostenets Memorial Complex

For the sake of kindness and mercy

The largest death camp in the former Soviet Union was located near the Belarusian village of Maly Trostenets, being the final destination of over 200,000: among them war prisoners, partisans, old people, women and children. 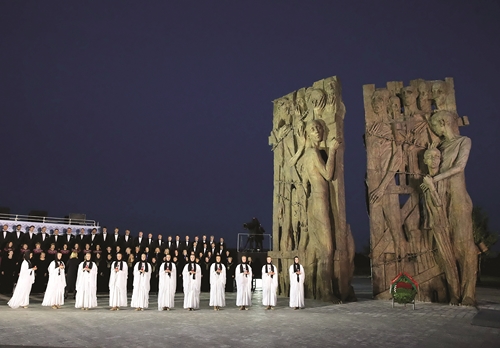 Speaking at the opening ceremony, President Alexander Lukashenko shared his deepest feelings, saying, “Our hearts shrink in pain at the thought of Nazi atrocities and crimes committed against humankind. Various nationalities and confessions were brought here in such large numbers; among them were not only our compatriots but those from other European countries: Poland, Germany, Austria and the Czech Republic. This place was a dire conveyor of death. Some wounds time cannot heal. The memory of those countless victims of the Great Patriotic War remains an open sore: the years of Nazi occupation have left an indelible mark on our land. Burnt villages and destroyed cities, and inhuman ‘death factories’ aimed to destroy our nation. Belarus was destroyed almost completely.”

There were about 250 camps for Soviet war prisoners, as well as 350 detention facilities for the civil population and 186 Jewish ghettos within Belarusian territory. Mr. Lukashenko stated, “We venerate and will always remember the victims of that war. With this in mind, constructing Trostenets Memorial has been a matter of honour for Belarusians.”

The Trostenets Memorial is Belarus’ symbol of condemnation for the Nazis’ inhuman policy towards peaceful Europeans. Architects faced the challenge of commemorating victims, while preserving the historical truth and creating a full picture of the torture endured, providing evidence of the terrible tragedy, which unfolded at the centre of Europe, on Belarusian land.  “The monument’s erection has been a truly nationwide project, funded from charity donations, from individuals and organisations. Meanwhile, the nationwide day of voluntary work (subbotnik) helped build the monument,” Mr. Lukashenko added.

According to the President, various nationalities share the pain of Trostenets, resulting in the project attracting many foreign sponsors. “The memorial in Trostenets is a symbol of our condemnation of inhumane Nazi policy towards the peaceful population of Europe. The motto of ‘No One Is Forgotten, Nothing Is Forgotten’ unites us all. We are enormously grateful to those who’ve made this major project reality and to those who’ve provided, and continue to provide, all-round assistance in its implementation,” Mr. Lukashenko emphasised. “Let this memorial help unite people in the name of kindness and mercy. Let it remind us, as well as our children and our grandchildren, of the importance of protecting peace and public accord. Let it prevent us from forgetting what heinous tragedies can stem from the ideas of  the Nazism, and intolerance, and the intention to impose your will over another’s, using the power of weapons.”

The President warned against attempts to rewrite the Great Patriotic War history, saying, “In recent times, we often hear people saying: ‘Why do we need this? Just forget everything’. A hideous thing hides behind these seemingly harmless words: the attempt not only to forget but to rewrite the history of the war, taking away the deeds of our people. We must not forget; we must not give away this Great Victory, which stands in testimony to the greatness of the Soviet people, from whom we are descended. Today’s Europe and the entire world should be grateful to our fathers and grandfathers, who sacrificed their lives, for us.”

According to the President, memorials are more than tributes to victims, serving to remind us of the horrors of war. “We should understand that there is no place for war on this heavily populated planet. We, in Belarus, will do our utmost to prevent this tragedy from repetition. These sacred places will remind us of the horrors of that war and the inadmissibility of its repetition today.”

The President thanked everyone who attended the ceremony, saying, “Thank you for coming, and proving that we’ll never betray the deeds of our fathers and grandfathers, and of our mothers, as well as those innocent children and the elderly, who perished on this land.”

Mr. Lukashenko also chatted to war veterans after the ceremony, wishing them health and long life, urging them to continue living, standing as ‘living witnesses to the events of the Great Patriotic War’. He noted, “We must keep peace in our country and you, veterans, are a guarantee of this peace.”