Interview with the director Viktor Aslyuk

What makes a documentary film successful, what is the difference between rural heroes and city heroes and why should a director be a little cynical? Viktor Aslyuk explains it to our correspondent.

It is possible to go into minute detail and loftily tell about the talent of this person, but facts, as a rule, tell better than epithets. Today Viktor Aslyuk is the only academician of the European Film Academy in the country.

He has made more than forty documentary films, and last, Wooden People, which is about a lonely carver, Nikolay Tarasyuk, has already won five prestigious awards, including Grand Prix of the 9th International Film Festival of Art Trades which was recently held in the French city of Montpellier. What makes a documentary film successful, what is the difference between rural heroes and city heroes and why should a director be a little cynical? Viktor Aslyuk explains it to our correspondent. 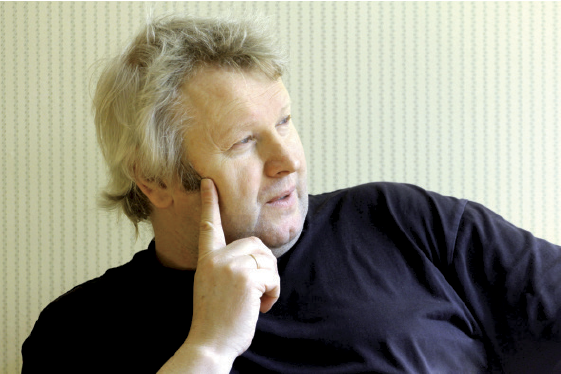 
What circumstances influenced you to connect life with filmmaking? I know that initially you left the philological department and worked as a teacher.

I already do not remember what influenced me. It seems that I have been engaged in filmmaking all my life. I think it was the element of self-discovery. I worked at school for one and a half years, then for two years I served in the army as an officer, and even considered staying there. After the army I wanted to go on postgraduate courses and to study literature. I felt that school was not my vocation. I searched for something close to literature and it appears that it was filmmaking. In 1989, the Institute of Theatre and Art enrolled students for the first time in departments of direction of documentary and game films. I did not go in the department of game films for one reason — it was necessary to appear on stage and to act out scenes, but I was afraid of that. I chose documentary filming, all the more so that when I studied in the language and literature department, I specialised in documentary prose, the studied creativity of Ales Adamovich.

Are there any themes which you would not start developing in documentary cinema?

There are a lot of such themes. It is possible to start developing them, but it is not known whether they will be successful or not. For example, in documentary films, it is very difficult to shoot intimate moments because you are working with real and true people. It is possible to find people who will do everything that you want. It can be both sex, and murders — all these things were in the history of filmmaking, but an ethical moment is very important in documentary films. It is impossible to come into this trade being bad-mannered, but at the same time you should be also a cynic. If you are too fragile, and are afraid to shoot or make people act, you will not be successful. But there is always a line which you should not pass, and you create this line yourself. 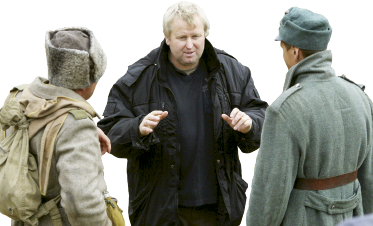 Viktor Aslyuk at the shooting


You shoot many films in Belarusian villages. Are there more interesting human stories or is it is easier to get a rural person talking?

Fifty percent of my films are ‘rural’. But it turns out that those films which I shoot in the villages are more successful. It is very true that it is easier to work with rural people, mostly because they live in other atmosphere. In a city, people are put into cages of small apartments; there are no woods, fields and spaces which are in the villages. Everything in a city is more artificial, while in the village they are real and eternal. It is not interesting to shoot people living among high-rise buildings. Besides, a Belarusian city is a very simple and sometimes primitive environment. Urban people living in Soviet architecture do not feel nature, time, history and ties with traditions. The environment of our modern cities creates an awareness that the person will disappear together with those boxes. But there should be a sensation of eternity. The preservation of historical memory and the environment in which the nation was being formed is very important.

If you think about ‘Wooden People’, this film should not be successful. It is the film about a person who carves dolls. In the world there are many films with a similar theme. People all over the world shoot films about those who draw, carve and so on. Why is this film so interesting? The protagonist is a lonely old man, a sculptor called Nikolay Tarasyuk, the last inhabitant of the village Stoily of the Pruzhany District. He tries to restore the world which has disappeared. Tarasyuk carves images of his former fellow villagers, from wood and creates scenes of rural life. His wooden people reap rye, get married in church and participate in a funeral. Nikolay Vasilievich feels the importance of the environment in which he lives, the importance of peasant work, national song and traditions and tries hard to preserve this environment.

Actually the whole nation should do what Nikolay Vasilievich does. They should try to preserve their own property, architecture and language, because all the rest is biological and temporary. For example you eat, live, die and that is all. People forget about you. They may erect a granite monument to you, but in due time it will also turn to dust. A person cannot exist out of such categories as memory, morals, singularity and tradition. People should resist mass sclerosis. For this purpose we have the medium of art, as film, literature and, in general, culture.

What resources help you find people whose stories can touch and bring deep reflexions?

Nothing helps. It is a very difficult thing. But it is basically a problem of those who have nothing to tell. If there is something to tell, a person finds both the situation and a protagonist. There are two variants of work of the director-documentary filmmaker. The first is when you yourself have something to tell, and the heroes in a documentary film are more likely to be actors, used as a means for expressing your thoughts. The second way is when your hero is such a versatile and unique person that you hide your own ego and reveal as much of him as possible.

What do you want today as a director?

I think I have not yet made those films which I should make. The technique of filmmaking has changed over the last fifteen years that I have been engaged in documentary cinema. The new equipment has brought new aesthetics and new working conditions, and to remain at a high creative level, it is important to overcome the temptations of technical transition. Today, with small cameras becoming available, it is very easy to shoot something, to edit it and think that it is documentary film. But it is illusion. There is a trade with its own laws and conventions. It is necessary to learn this trade. Only then there is a chance to become a professional.

But with documentary filmmaking, it is possible to be a professional and to not to be successful. It is already the second step in the development of the trade. It depends on reasons which are difficult to define. Sometimes one film has influence and becomes famous, while another, which is no worse, not. It is difficult to understand, why it happens so. But shooting films is interesting. It can justify one’s existence and fill it with a true sense or purpose. And as for ‘to earn money’... Well, that’s another story.