Everything begins with love

Galina Kalyuzhnaya — an Honoured Worker of Culture of Ukraine and the Head of Minsk’s Zapovit Public Association (soon to celebrate its 25th jubilee) — can hardly imagine her life in Belarus without strong ties with Ukraine. She has lived in the Republic for over 50 years but still endeavours to help Belarusians learn about the rich and beautiful culture of her homeland 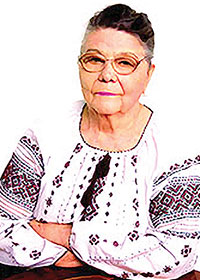 Ms. Kalyuzhnaya called our editorial office asking us to tell our readers of a wonderful contest dedicated to Taras Shevchenko’s 200th birthday. Later, she visited personally, showing us drawings submitted by pupils of Minsk’s art schools and centres of supplementary education. I soon realised that our conversation would focus on more than those drawings. Her manner aroused sincere sympathy and respect, being full of enthusiasm for the Ukrainian community, which she headed 15 years ago.

We heard stories of Ukrainets v Belarusi (Ukrainian in Belarus) newspaper, of her devoted assistants and of co-operation with schools and libraries — in particular, with the National Library of Belarus. Last year, the country’s major library hosted a round table session dedicated to ‘Taras Shevchenko and the Influence of His Artistry on the Slavonic Spiritual World’. Initiated by the National Library’s Director, Roman Motulsky, it drew experts from the Belarusian National Academy of Sciences’ Literary Institute and the Belarusian State University.

Ms. Kalyuzhnaya tells us that Mr. Motulsky was born in Lvov Region, so understands Ukrainian feeling well and cherishes Ukrainian literature. Her own life is intricately connected with books, as she worked at a Trade Union library for many years. “She is unique,” notes Mr. Motulsky, adding, “Anyone would envy her energy. Everything she does is wrapped in the warmth of her heart.”

It’s possible that Ms. Kalyuzhnaya’s forefathers once lived in Belarus. After her mother died, she came to stay with Minsk relatives, travelling from Ukrainian Dubno (in Rovno Region). Galina grew up in the Belarusian capital, entering the Maxim Tank Pedagogical University, to study librarianship. She then married in Belarus, having two daughters. She firmly believes that Fate has played its hand, feeling that she is destined to strengthen Ukraine’s ties with Belarus, having left her homeland. Ms. Kalyuzhnaya has adopted this mission eagerly, while working at a Minsk library.

Some people become heavily involved in public activities, devoting their excessive energy selflessly, to help others. Of course, this brings joy and inspiration and Ms. Kalyuzhnaya is one such. In 2005, she headed the first Ukrainian association: Zapovit. Before this, she led a department at library #20, working hard to unite Ukrainians living in Minsk and to familiarise Belarusians with Ukrainian culture, via meetings, literary and song parties and diverse contests for both nationalities.

Zapovit is now among the nine strongest branches of the Belarusian Vatra Public Association of Ukrainians, uniting around 100 members; Ms. Kalyuzhnaya fully appreciates their activities and is always ready to share information on its work with the media, describing its new projects. She notes that all its members are similarly active and passionate. Among them are Alena Yudina, Anna Sapsay, Yaroslav Kozyuk, Nadezhda Nemko and Olga Sukharenko; all give their time and effort, and Ms. Kalyuzhnaya appreciates their involvement and friendship.

When asked whether she’s tired of 15 years of such work, she asserts that she has no time to become tired, as there is too much to do! The next major event is planned for March 9th: the anniversary of Taras Shevchenko’s 201st birthday. Her newspaper also requires funds and time and has been helping those seeking refuge in Belarus, from Ukraine. Naturally, Ukrainians already living here have been doing their best to help those in trouble, donating clothes, food and footwear to the Red Cross Society office. Everyone hopes that the east of Ukraine will soon enjoy peace.

Those who are truly cultured tend to be recognised for their tolerant attitude to other nations and their desire to learn about all spheres of art, literature and other nations’ customs. Of course, Belarus shares Slavonic roots with its neighbours. Ms. Kalyuzhnaya tells us, “It’s not only useful for Ukrainians to sing their native songs and feel unity with their homeland but for Belarusians to listen and to learn the Ukrainian language.” She believes that Ukrainians enrich their souls while listening to music in Belarusian, since it is similar to Ukrainian. The Vatra folk group has won international, Republican and city festivals three times, while poetry and art contests are now common among Belarusian schoolchildren, enriching not only participants but all involved. Zapovit has twice held contests for readers and for artists: dedicated to the 195th and 200th anniversaries of Taras Shevchenko’s birth. 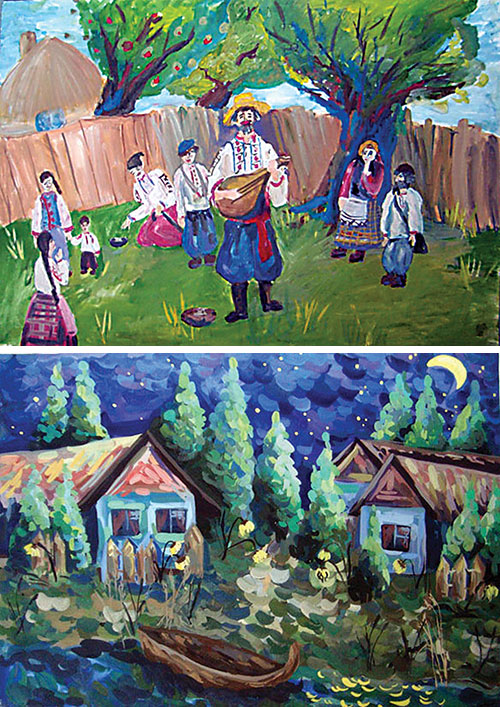 Works of the winners and other participants of Shevchenko Contest of Drawings, dedicated to Taras Shevchenko’s 200th birthday


It’s clear that such contests should be a regular occurrence, allowing Ukrainians to draw strength from their love for their native country. Ms. Kalyuzhnaya recollects with pleasure the awards ceremony for the 2nd Minsk Shevchenko Contest of Readers and the 2nd Shevchenko Contest of Drawings, hosted by Minsk’s Palace of Children and Youth. She smiles, “It was a triumph for the artistic spirit and friendship between our nations. The desire to organise it is rooted deep in our human nature, nurtured since childhood, and shaped by our environment and other cultures. Art inspires us to our own endeavours, be they singing, reading, drawing or sculpting. Art is a gift from God.”

The above mentioned contests gathered over 200 children, with more than 60 receiving diplomas, letters of gratitude and recognition, as well as collections of Taras Shevchenko’s books. In all, 140 editions were presented, with 22 participants named as winners and awards handed by representatives of the Ukrainian Embassy to Belarus, the Plenipotentiary for Religious and Nationality Affairs Office, the National Library, the Union of Belarusian Artists and the Minsk City Executive Committee’s Education Department. 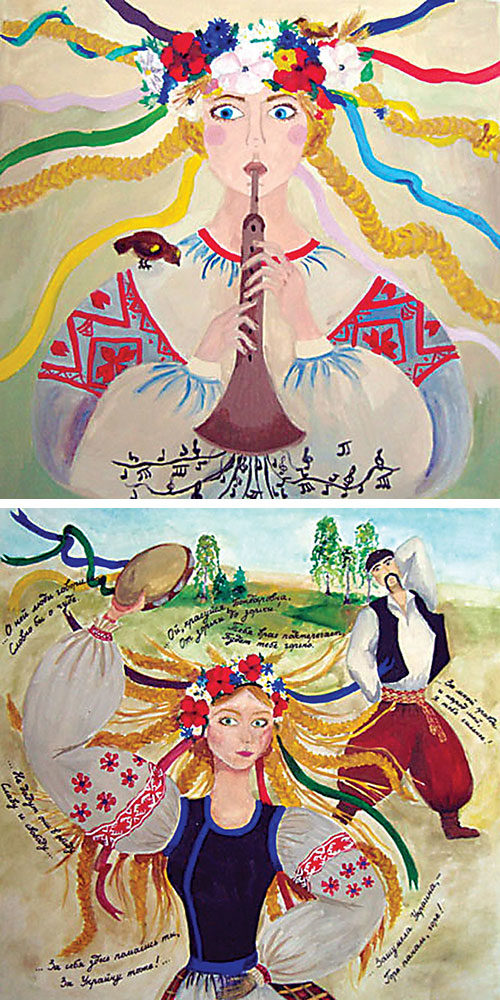 Works of the winners and other participants of Shevchenko Contest of Drawings, dedicated to Taras Shevchenko’s 200th birthday


Zapovit members attended the event, which recognised winners in two nominations: ‘Taras Shevchenko is a Great Humanist, Singer, and Fighter for the Freedom and Independence of the Ukrainian Nation’; and ‘The Spiritual Influence of Taras Shevchenko’s Freedom-Loving Ideas on the Artistry of Belarusian Folk Poets Yanka Kupala and Yakub Kolas’.

Interestingly, 24 streets across various cities are named after Taras Shevchenko and not only Ukrainian but Belarusian fans of his artistry attend his monuments in Minsk, Brest, Mogilev, Gomel and Slutsk on the anniversary of his birth. Ms. Kalyuzhnaya will be coming to Shevchenko’s monument near the Ukrainian Embassy in Minsk this year, to honour the great poet, bringing her love and flowers. As she says, her heart continues beating only owing to this love.