Energy for the future

The Belarusian nuclear power station is to begin producing energy soon, with its first reactor launched in 2018 and the second in 2020

The Belarusian nuclear power station is to begin producing energy soon, with its first reactor launched in 2018 and the second in 2020, meeting its deadline via three construction shifts daily; recently, President Alexander Lukashenko conducted a site inspection 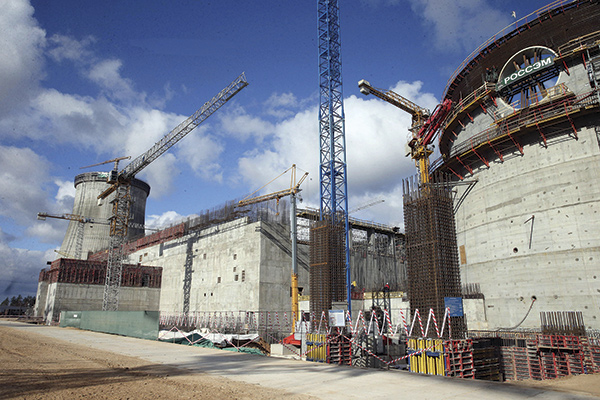 The decree ‘On Building the Belarusian Nuclear Power Station’ was signed by the President in November 2013, enabling the general contractor, Russian Atomstroyexport JSC, to begin its work. Since then, much has been done: concrete has been poured for the foundations, necessary workshops have been built and, now, the future station is gaining its concrete features. Works on major buildings and constructions, in addition to some supplementary objects, are in full swing. In all, 99 objects out of 131 envisaged by the project are being worked upon. This year is a busy one. Around 25 percent of the planned budget has been spent, 22.2bln Russian Roubles. Already complete are a firefighting station and a modern training centre for station personnel (including simulators).

The President toured the centre, also visiting several workshops where pipes and metal constructions are being produced, and viewing the future building for the reactor turbine of block #1. From its top, you can see the whole construction site; the President remained pleased.

A nuclear power station is of strategic importance for Belarus. Its launch will aid the country’s energy independence, while ‘saving’ money in the long run, since natural gas use will fall by 5bln cubic metres a year, and greenhouse gas emissions (and ecological effects) will be reduced. Consumers will see the benefits: even if gas tariffs rise, the cost of electricity will be unaffected.

The Belarusian station is not just an economic or status project; it ensures much more than energy independence. On meeting the Head of the Rosatom State Atomic Energy Corporation, Sergey Kirienko, the President several times repeated that, if a nation wishes to progress and develop, it needs new projects and should always be ready to learn something new.

“We’ve agreed with the Russian leaders that the station will be built in the shortest possible time. This won’t be at the expense of security but the station will be completed with financial efficiency in mind,” reminded Mr. Lukashenko. “The most important aspect is that Belarusians should work shoulder to shoulder with Russians and foreigners to learn how to make such complicated projects in the future.”

Rosatom has signed construction contracts with many countries: 12 nuclear power stations are being built similarly to our Belarusian model and are coming into operation. If this enjoys popularity, then our specialists could help Russian colleagues in the future, with construction at other sites.

While the President was inspecting the construction site, asking questions on the station’s future functioning, builders and workers gathered at the training centre. Mr. Lukashenko explained the key motivation for Belarus building its own nuclear power station, saying “We don’t live in a desert. We’re surrounded by nuclear power stations: two in Ukraine and one in Smolensk. Moreover, St. Petersburg and Kaliningrad are completing construction of similar stations and Ignalina station is also close by. We need not worry about having our own. Some time ago, I had to persuade people — especially in Ostrovets — that we needed our own station. Now, I hope, we’re all convinced of having made the correct decision. We should have our own station, for its cheap energy, for the opportunity to embrace new technologies and for the chance of a completely new face for the Belarusian nation.” 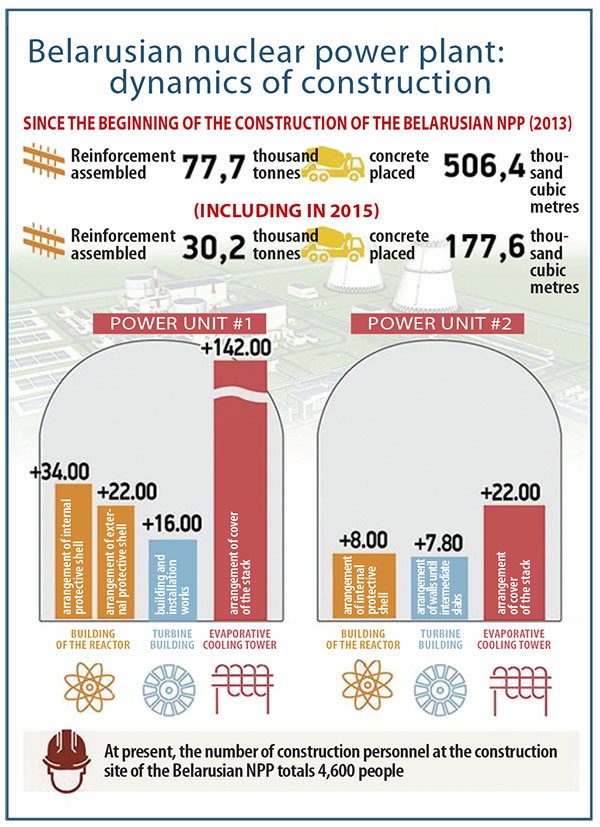 In addition to building the nuclear power station, infrastructure sites are also being constructed in Ostrovets: schools, kindergartens and a new block for the hospital. This summer, the Energy Ministry stated that Ostrovets doesn’t need special residential districts for station staff but Mr. Lukashenko disagrees, wishing to see the town, and the region, develop. He responded, “We’ll turn Ostrovets into the most modern and beautiful town; the most educated people will live there. It’s very important for the country. Ostrovets will become an example of how we should be constructing and developing our district cities, of which there are 118 countrywide. This construction site has far reaching goals.”

At present, around 12,000 people live in Ostrovets but, as soon as the station comes into operation, reaching its scheduled capacity, the town’s population will increase by 40,000-45,000.

Chatting to Ostrovets District residents and construction workers, the President was asked about literature and his attitude to Svetlana Alexievich’s Nobel Prize. Mr. Lukashenko replied, “I’m glad for her, as she is a citizen of Belarus. The award means that, regardless of your position, you can still work and create, write, speak your mind and so on in Belarus. I know her works and have heard much discussion on them. I’ve read her thoughts in the printed media, which I daily receive. You know, so many opposition members have pretensions to my position — inside and outside of Belarus. I don’t distinguish Ms. Alexievich from among them or view her as a major opposition member. Svetlana has written good books. She has her own style. I have nothing against this. Even her early works, such as War’s Unwomanly Face, were supported by the Soviet government. Her famous book — Zinky Boys — is another example of our reality.

In my greeting to Ms. Alexievich, I wrote that it’s important that a Belarusian has won a Nobel Prize: the first time since Soviet days. The key now is how she’ll use this. If you are a Belarusian citizen, irrespective of being born in Ukraine, then this is your land: your state, whether you like it or not. You may be flying high, but how will you use this image, this legacy? For the benefit of your people? People should enjoy the benefit of you being fortunate enough to receive this award; we’ll survive any sort of opposition thoughts.

A writer’s work is the most difficult. Like scientists, they must be creative.
Заметили ошибку? Пожалуйста, выделите её и нажмите Ctrl+Enter