Emotional look at war and Victory!

Victory! 70 is, without exaggeration, an ambitious and grandiose exhibition project. Perhaps, not even old timers remember when Minsk’s Palace of Arts was last wholly given over to an exhibition! Being so rich in high artistic diversity, no less would be honourable, as the Belarusian Union of Artists would agree. 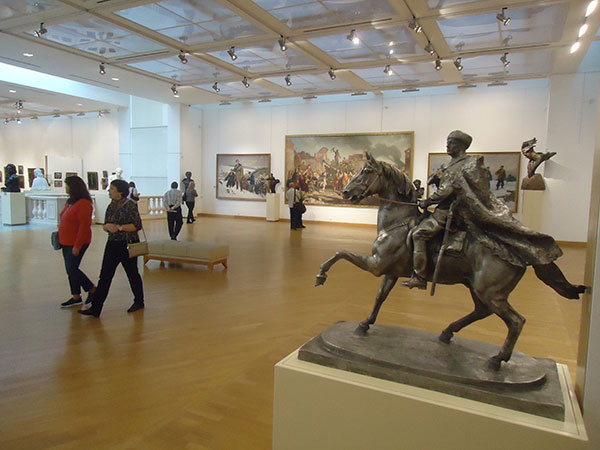 Exposition at the National Art Museum

The exhibition features 150 artists from across the country, with over 400 paintings, graphic works, sculpture and decorative arts pieces on show. Significantly, the exhibition brings together representatives of several generations: the youngest participant is just 20; the oldest is almost 100! Works by famous Belarusian Great Patriotic War veterans Victor Gromyko and Leonid Shchemelev are among those exhibited, alongside masterpieces by veterans no longer with us; their works are their legacy.

Artists’ alliance with war is rarely easy, since it is never simple to portray the reality of history while retaining an artist’s eye. If the truth is lost, then the value of the process is questionable. In fact, the main task is not to show ‘victory over evil’ but that our victors managed to keep the tenderness of their souls. 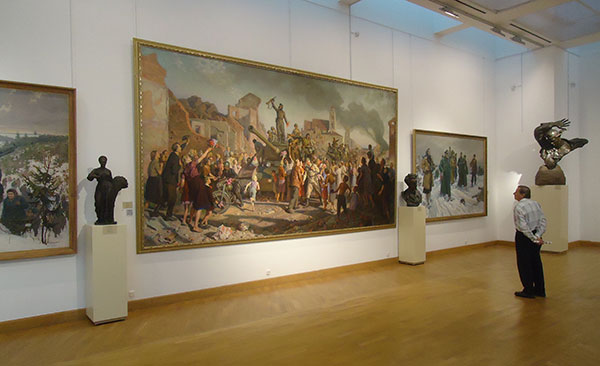 It’s very significant also for art. In Belarus, where people to the full felt all the horrors of the experience, art received a new impetus. The post-war years became its golden age — the national school was formed.

The theme of the war has, over the decades, occupied a significant place in the creativity of Belarusian artists. Their interpretations vary — from the dramatic paintings of Mikhail Savitsky to the life-affirming still life works and landscapes of Leonid Shchemelev. Such breadth is prevalent in Belarusian art, as the current exhibition evinces. Although its exposition was essentially traditional, it shows the strength of the human spirit, and the heroism of soldiers in their fair and liberation war. 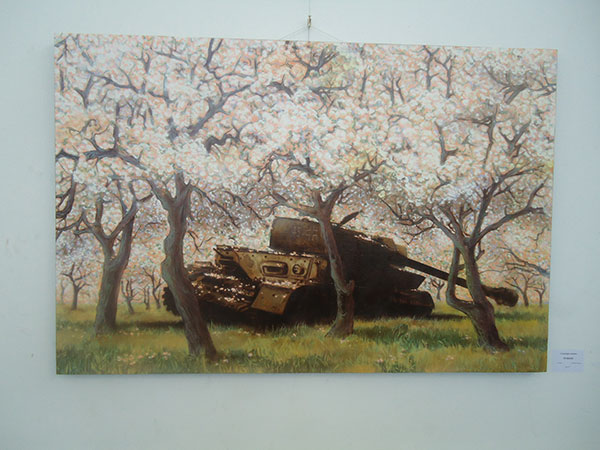 Two floors of the Palace of Arts were given over to military themed works, each with emotional individuality, revealing the essence of wartime ordeals. Of course, the pictures by the authors who have through the war were also on show. People’s Artists of Belarus Leonid Shchemelev and Victor Gromyko are particularly notable, their works having great depth, being based on firsthand experience; they uncover war’s terrible nature.

The younger generation is often in awe of those who experienced the severe test of war and survived, going on to live ‘ordinary’ lives. Victor Gromyko experienced the hardships of fighting in those war years, helping liberate his native land from Nazi invaders. In 1941, he became a member of the underground organisation in Orsha, and was then a scout, a machine gunner and, even, the commissioner of a special purpose regiment detachment. He also edited Narodnyye Mstiteli (People’s Avengers) newspaper. Strength, courage and human dignity lie behind the dry facts of this military biography. Victor Gromyko’s vivid love of life found expression through his war experiences, later revealed in his rich creative diversity. He explores the meaning of love, spiritual ideals and beliefs, as well as the responsibility of the artist. He entered Belarusian art as a master of historical-heroic paintings, major epic scenery and psychological portraits. Breath of Freedom, by Yu. Antoniuk

Famous painter of battlefields Fiodor Baranovsky was one of the first graduates of the Minsk Art Institute. His Soviet realism style is typical of the Belarusian school of pictorial art. His soldiers share with us their characters, emotions, determination and conviction. His characters are courageous, living with honour and being unafraid of hard work.

Belarus was liberated from Nazi invaders 70 years ago; the war has long since become history. Yet, it remains to the fore in almost every Belarusian family; how can it be otherwise in a country that lost a third of its inhabitants to those cruel years? 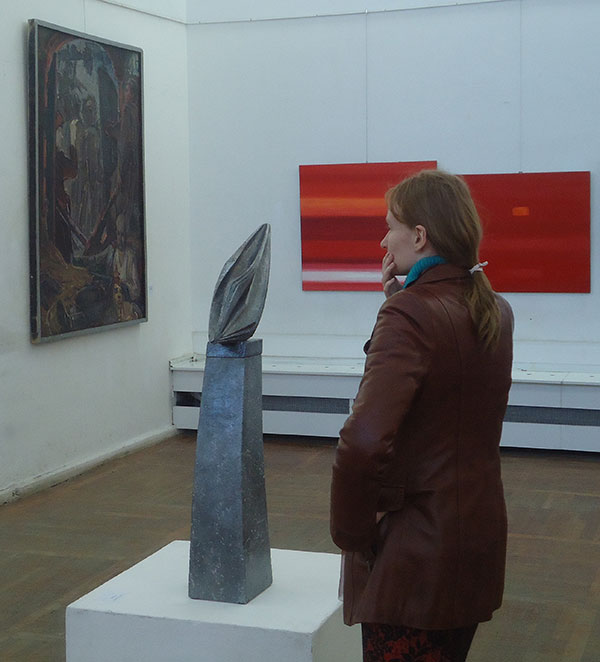 Meanwhile, Fiodor Baranovsky was born on July 3rd, celebrating his 20th birthday on the day of Belarus’ liberation, in 1944. He later painted Our Minsk, capturing the joy of meeting warrior-liberators. However, one of his most famous works is Bath: beyond the superficial ‘everyday’ plot, there is protest against the war, which so ruined young lives. It is special and significant not only for the author’s professionalism but for its unexpected approach to the theme: the paradoxical connection between our love of life and latent tragedy.

Undoubtedly, Baranovsky is a phenomenon of Belarusian art in the same manner as Nikolay Zalozny, Ivan Dmukhailo and Iosif Belanovich, whose works were also exhibited. 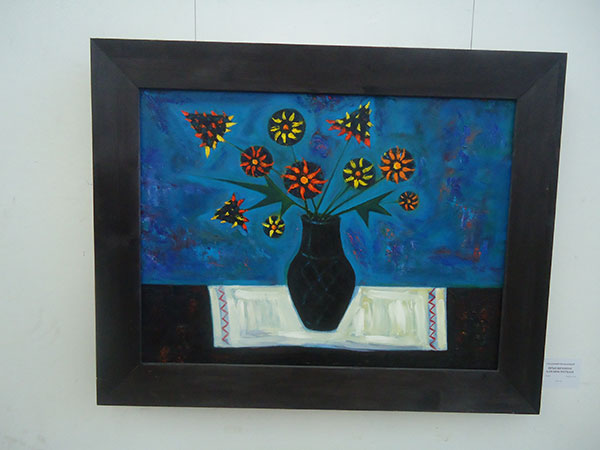 Ivan Dmukhailo is rare among artists who lived through the Great Patriotic War in having chosen not to paint on the war theme. Rather, those years allowed him to reflect on life’s richness and beauty, through landscape painting. Here, he realised his talent and abilities.

Nevertheless, the military theme is fully present in works by the Great Patriotic War veteran Iosif Belanovich: Brest Fortress, Heroes of Immortality, Memory, and Soldiers. He reflected on the humanity of each soldier-liberator until his final days, creating paintings dedicated to the heroic defence of Brest Fortress, the courage of those who survived the siege of Leningrad, and the battles of Berlin, as well as the liberation of his native Minsk. 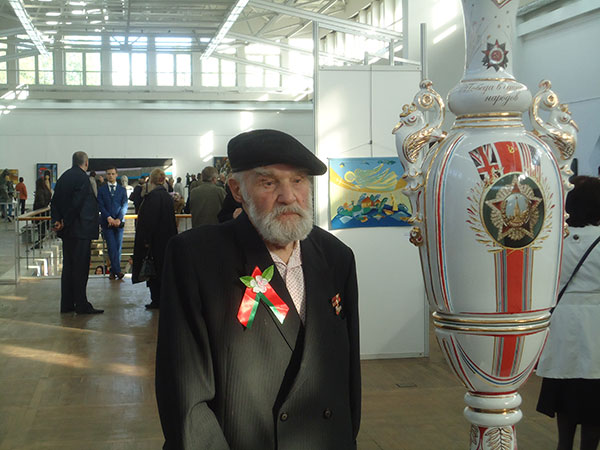 Necessarily, most works by Belarusian artists on the theme of war are tragic, despite the domination of uplifting heroism. This fully refers to the creative activity of People’s Artist of Belarus Georgy Poplavsky, graphic pieces are also on show. In his own words, Belarusian painters have made their own contribution into the depiction of the history of the Great Patriotic War. He believes that ‘this is our duty, since the sacrifices made by Belarus during the war years are unforgettable’.

The National Art Museum is also displaying works dedicated to the 70th anniversary of the Great Victory. Naturally, Belarusian art from the 1940s was closely connected with military events. Some artists served at the front, while others were evacuated or stayed in occupied territory; some joined the partisan movement. 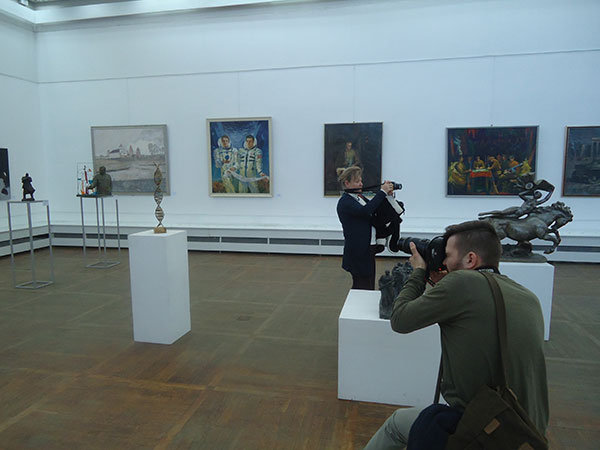 Since there was no time to evacuate the pre-war State Picture Gallery collection (the predecessor of the National Art Museum of Belarus) most works were either looted or destroyed, during bombings and fire.

Despite harsh conditions, Belarusian artists continued to create in the war years. They found more convenient forms of reflecting reality, making small sketches, battlefield drawings, posters and cartoons, as well as portraits. After the liberation of Belarus, they took trips to battle sites, drawing images of war heroes. 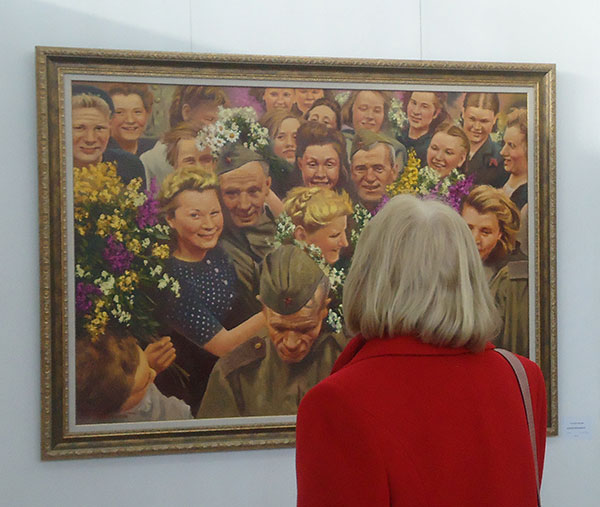 Near work Victory Day, by I. Kosobutsky

The war theme reached its peak in the late 1940s, continuing until the 1970s. The current exhibition at the National Art Museum of Belarus presents paintings, graphics, sculpture, and works of decorative-applied art, all dedicated to the protection of Brest Fortress and the liberation of Minsk, as well as partisan portraits and images glorifying the memory of Heroes of the Soviet Union, who died during the war. The exploits of Batka Minai (Minai Shmyrev), Nikolay Gastello, Lev Dovator, Alexey Danukalov, Konstantin Zaslonov, Piotr Kalinin, Piotr Kupriyanov, Yelena Mazanik, Mikhail Silnitsky and Ded Talash (Vasil Talash) have inspired not only artists but writers, composers, and film and theatre directors. 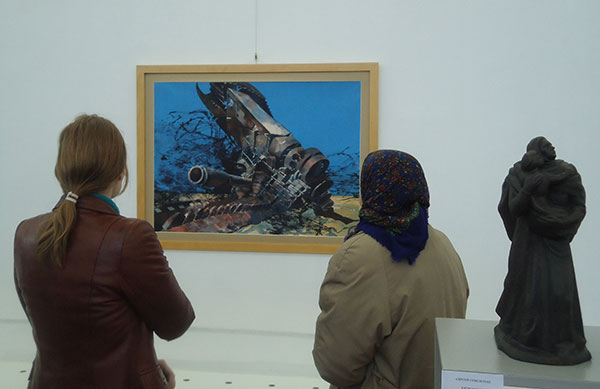 Near work Chimera, by S. Vrublevskaya

The brightest representative of the ‘severe style’ is People’s Artist of Belarus Mai Dantsig, who recently turned 85. No large exhibition is complete without his works. He is among those creators who are loud, honest, and always faithful to himself, as well as his beliefs and ideals. His themed paintings, urban landscapes, still life works and portraits explore various themes, including war. All are united in their clarity and timeless significance. Among the golden fund of national art are Saved World Remembers, Belarus Is the Mother of Partisans, and On Guard For Peace; all have their own nobility. Mai Dantsig has explored times of war and peace, his favourite hero-city, Minsk, those with whom he has been and remains close, and most importantly, the times in which he has lived. 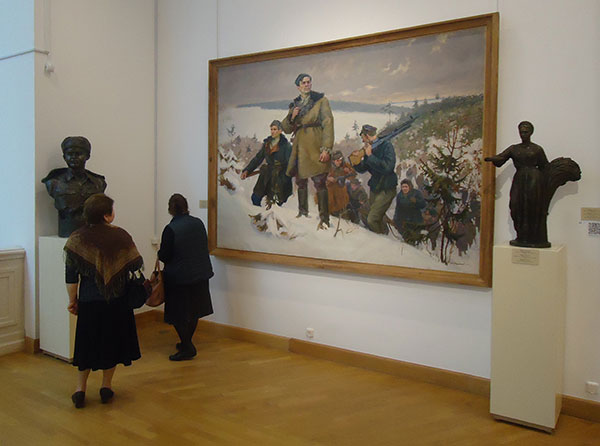 Near work For Native Belarus, by V. Sukhoverkhov, at the National Art Museum

The genres on show are diverse, from portraits and landscapes to narrative paintings. During several decades the painters were creating allegorical and metaphorical compositions, reflecting the tragic and tense atmosphere of military days emotionally and dramatically: Ballad of A Mother, by Leonid Osedovsky; Unconquered, by Vitaly Tsvirko; Stand To The Death, by Yevgeny Zaitsev; We Will Return, by Olgerd Malishevsky; In Memory Of Fellow Soldiers, by Natan Voronov; Nikolay Zalozny’s Poppies; Izrail Basov’s Memories; Vitebsk’s Gates and Partisan Madonna, by Mikhail Savitsky; 1941. Over Pripyat, by Victor Gromyko; My Birth, by Leonid Shchemelev; Breakthrough, by Gavriil Vashchenko; Thank You, Mom! by Ivan Rei; and Song About Partisans, by Vasily Sumarev.

More than 60 works feature in the Great Patriotic War in Art exhibition, created between 1943 and 1985, exploring not only the Victory but other related scenes. The Victory has been the inspiration for many Belarusian artists, with the best works held at the country’s main museum. There are enough such masterpieces to fund several major exhibitions.

The exhibition will, undoubtedly, attract attention, reflecting as it does the courage, the sacrifice and the bravery, which brought us peace.

Both exhibitions are dedicated to the infinite value of life, which no time can erode. The Palace of Arts has intentionally incorporated works by young painters, alongside those by their forefathers; they have their own emotional perspective, drawing on the memories of their fathers and grandfathers. 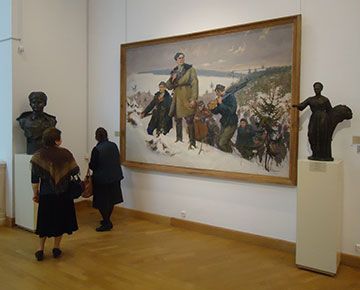