The Bereza district centre and Signevichi village are separated by twenty kilometres, while Ekrem Sailyk and Istanbul are separated by two years. In 2012 he changed his sea landscapes and minarets for Polesie’s meadows and the towers of the Signevichi Catholic church. Since then, at 8 in the morning he goes to tend to his small herd of cows on the river bank. In the afternoon he’s milking and after dinner he returns to the meadow. This is his life, day after day. 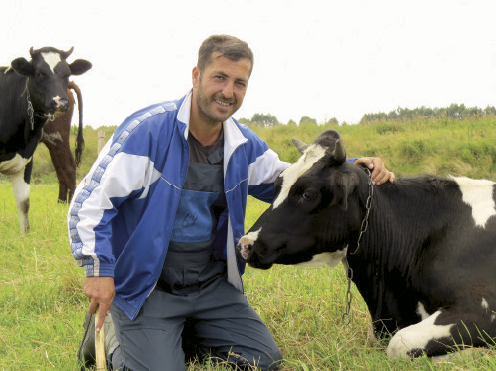 
We meet Ekrem at, as he calls it, his workplace, where eight cows and bull-calf lazily chew the grass. The farmer calmly observes the animals, from time to time calling to them, ‘Zorka! Lastochka! Krasunya!’

Before this life, Ekrem was a director of a pharmaceutical plant, with a very good salary, an apartment by the sea, a company car, and foreign business trips. And, he adds, three mobile phones. Each day, he would deal with nearly three hundred calls. By the evening his head spun from work and it was difficult to escape from the millions in Istanbul.

“Sometimes, I simply dropped everything and went into the forest for two weeks. I took only tea, salt and sugar along. All the rest, I found in the forest. I hunted, collected berries and herbs. After all I am pharmacist, and I know well what in nature is suitable for food. It was my rest from city vanity. In Istanbul, there are a lot of people and cars; there is no silence.” On the peaceful face of Ekrem one can guess that the road to our country led him to internal contentment.

He admits that, in Belarus he feels like he is eighteen years old again. He considers that the untouched nature, fresh air, loving family and favourite business influence him. However, the way to harmony was not short.

It started with a desire to visit places where he had not been. He chose Belarus. In one of his trips to Minsk, he got acquainted with a simple shop assistant Yelena. It was love at first sight. He at once proposed marriage to her. Today they have a daughter, Elif, and their second child is to be born in the coming weeks.

At first, Ekrem planned to stay with his wife in Istanbul, but Yelena could not leave her elderly parents in Signevichi. The pair decided to live in Belarus. Thus, an absolutely new page started in the family’s biography.

Ekrem does not hide the fact that, in the first few months, the villagers of Signevichi constantly watched him. He tells that the villagers, not accustomed to foreigners, were interested in everything: what clothes he wore, where he went, what he ate and why he did not eat pork or drink alcohol and why he decided to breed cows. But in due course, their interest ceased. His fellow villagers understood that the foreigner was a peaceful person and behaved himself as others. Pork and alcohol are forbidden by Islam and breeding cows is his business. Some of Ekrem’s Turkish relatives are farmers, but he considers that the conditions for breeding cattle in Belarus are more favourable. And he expects that in five years, his business will start to bear fruit.

Ekrem is still interested in the way of life of locals. He likes nature, natural products and the kind and open people. Ekrem has already found a common language with his neighbours, in the literal and figurative sense of the word. He speaks Russian well and words of the local dialect appear in his speech from time to time. During Christian holidays, Ekrem is always at the laid table, whilst, in turn, neighbours and relatives respect his religion and customs — as it has been in Belarus since time immemorial.

In general, new languages and cultures come easily to him. The main thing here is desire, considers Ekrem Sailyk. If you want, you can learn two hundred words a day, and will not be afraid to move to another country.

Dinnertime draws near and it is time to milk the herd. Ekrem hurries on the cows, and we slowly make our way back to the house were Yelena meets us near the gate. Time has come to say goodbye. The centuries-old trees of the main street of Signevichi are reflected in the eyes of Ekrem. But it seems that the harmonious minarets of Istanbul call him again. Ekrem does not doubt that he will visit his favourite city more than once.

“Istanbul is like a woman: it is difficult with her, but without is impossible,” he says.

And if this is so, then how is it possible to refuse to meet your beloved.