Belarus and Russia build up co-operation in the defense sphere

MILEX-2014 International Exhibition of Arms and Military Machinery that took place in Minsk showed an obvious example of the effective co-operation of the Belarusian and Russian defence industries. Some figures: about hundred Belarusian enterprises deliver about 2,000 different products to 300 enterprises in Russia. In their turn, 70 enterprises of Belarusian defence sphere are interested in products of Russian production workers. Mikhail Myasnikovich, the Prime Minister of Belarus, thinks that our countries should go further and create joint companies in the military-industrial complex. Positive trends are already
visible. 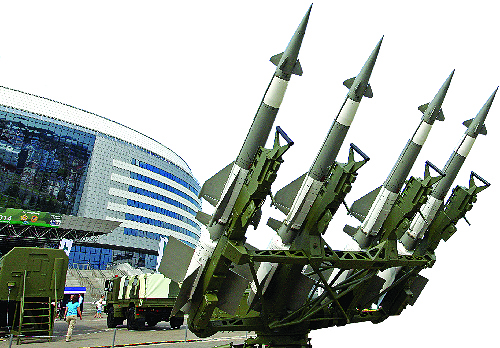 Some joint Russian-Belarusian projects have already received the highest appraisal. For example, presented at the exhibition, ‘Lis’ armou-red cars, produced by Minsk Wheel Tractor Plant, is Russian ‘Tigr’ with Belarusian filling. It differs through increased mobility and strong armour, which isn’t bothered by bursts of sub-machine gun fire. The car withstands even hits by bullets with a steel thermo sealable core. And there is no impassibility for such armoured vehicles. And on the track, ‘Lis’ easily travels at 120 kilometres per hour. According to Vitaly Vovk, the Director General of Minsk Wheel Tractor Plant, this technique can’t only swim. They also intend to create the whole range of light armoured vehicles that will be equipped with a system of counter-mining.

The creation of our own air defence system is an actual task for the defence industry of Belarus. There is already some groundwork: Belarusian ‘Alebarda’ — the modernised variant of the Russian ‘Pechora-2BM’ complex — was presented at the exhibition. Experts think that it can become a sort of ‘locomotive’ of the Belarusian military-industrial complex. This air defence system differs through increased mobility, high noise immunity, vitality and fast response to the situation. A new ‘day-night’ optical system has been worked out and all adjustments are carried out automatically. When the complex has been created, units and components, produced by Belarusian enterprises, have been used. Perhaps, in due course, air defence systems will be produced in our country. Currently, all technical issues are decided in co-operation with Russia.

A full-scale specimen of the T-72B modernised tank aroused big interest at the exhibition. In negotiations with representatives of Uralvagonmash Russian Scientific and Production Corporation, the opportunity of co-operation on modernisation of such techniques, which is in the inventory of the Belarusian army, was discussed. Modernisation is planned to be carried out on the base of enterprises of Belarus. The Belarusian military-industrial complex intends also to co-operate actively with the Russian United Aircraft Corporation. According to Sergey Gurulev, Chairman of the State Military and Industrial Committee, we can produce, for example, element bases for planes or helicopters.

Thanks to co-operation and joint groundwork, the potential of the Belarusian army is growing.