Earthlings — all the best! 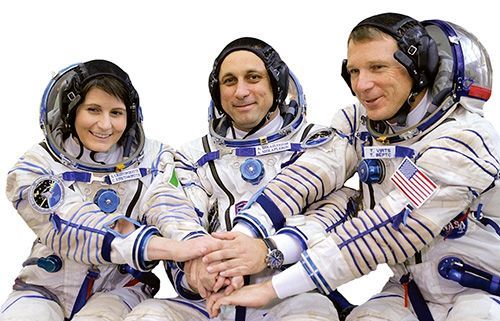 Internet sites have been reporting the arrival of the new crew on the International Space Station, welcomed by the existing team of Alexander Samokutyayev, Yelena Serova and Barry Wilmore. Belarus born Shkaplerov and his colleagues will spend almost six months on their mission. Anton’s parents, Nikolay Ivanovich and Tamara Victorovna, hail from Bykhovshchina District, although they now live in coastal Balaklava, in Crimea. It was there that the future hero was born. His first space mission launched on November 14th, 2011, and ended on April 28th, 2012. The new crew of the ‘Soyuz-TMA 15 M’, comprising Anton Shkaplerov from Russia, Terry Virts from America and Samantha Cristoforetti from Italy, will spend 169 days in orbit.

Samantha Cristoforetti has undergone flight training in America and Russia and this is her first space expedition. All three crew are pilots. And Terry Virts will venture outside the spacecraft three times during the mission, using his first two spacewalks to prepare a butt adapter for docking airships. The other will establish a communication system for docking airships. The cosmonauts will also be conducting repairs with a manipulator.

Terry Virts notes that the objectives of the three spacewalks are vital to the future of the station, including Anton Shkaplerov’s testing of a spacesuit featuring radio equipment, allowing broadcasting from space. As is traditional, the crew will report on life in orbit via their social networks and Anton will load photos onto the ROSCOSMOS site. Meanwhile, Samantha will announce the results of her research and, following on from Barry Wilmore, Alexander Samokutyayev and Yelena Serova, the team will be conducting about 100 experiments.

For the first time, there will be two women working on board the space station ‘long-term’ — for a period of about four months. Samantha jokes that there won’t be any ‘kitchen disputes’ since the station boasts two! Anton notes, “Yelena and Samantha are both qualified professionals, like the rest of us, with their own tasks to fulfil. We aren’t nervous, as we know that we have a good team; we know each other well, having trained together,” Anton emphazises.

The crew will celebrate birthdays and the New Year in space, toasting Earth at the turn of 2015 with a cup of espresso; Samantha, as a real Italian, can’t live without coffee, so has taken a coffee machine on board. Gifts have flown into space with the crew, on the condition that they only unwrap them on the correct day! Anton’s youngest daughter, Kira, has already presented her father with a gift: a little snowman, from the Cold Heart cartoon.

The cosmonauts will celebrate the New Year according to GMT time: three hours earlier than in Moscow. In fact, they will celebrate 16 times, because the ISS will cross all time zones.h
Заметили ошибку? Пожалуйста, выделите её и нажмите Ctrl+Enter