Earth will respond with gratitude

As in previous years, the first week of summer in Minsk is traditionally devoted to agro-industrial complex

As in previous years, the first week of summer in Minsk is traditionally devoted to agro-industrial complex 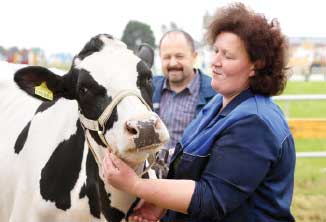 Belarusian agro-industrial week has recently ended here. The international specialised exhibition Belagro-2014 — became its most notable event. For two decades of its existence, the main agricultural forum, by right, has deserved authority not only in the country, but also behind its limits. Tens of thousands of people have visited two demonstration platforms, one in the Football arena on the capital’s Pobediteley Avenue, and the other in the territory of Gastellovskoye JSC near Minsk. Summing up the main agrarian forum of Belarus, the Chairman of the organising committee of Belagro-2014, the Minister of Agriculture and Food, Leonid Zayats, noted its productivity, “It is possible to call the exhibition a holiday which was successful for farmers, manufacturers of agricultural machinery, service staff of farming and industrial complexes of the enterprises, and numerous Belarusian and foreign visitors.485 domestic and foreign enterprises took part in the event and representatives of many countries who were present, expressed a desire to conclude contracts on the continuation of co-operation.

80 percent of the Belagro-2014 exposition is of domestic production. Twenty years ago it was difficult to imagine all that. Before the collapse of the USSR, Belarus produced for its own needs, no more than 17-18 percent of the machinery needed for the cultivation of basic crops: potato, wheat, rye and sugar beet. Today, Belarusian industry provides 100 percent of the country’s agricultural machinery needs. The First Deputy Prime Minister, Vladimir Semashko, noted this at the formal opening ceremony of the Belarusian agro-industrial week, “We have a full range of agricultural machinery, and we solved a twofold task. Firstly, we solved the problem of the provision of our own agricultural manufacture with advanced machinery and secondly, we turned agricultural mechanical engineering into an export business.”

Between 2005 and 2013, Belarus made $23 billion worth of machinery. From this, $6.8 billion was spent on machinery for domestic use. Belarusian machinery is in good demand on all continents. Vladimir Semashko explained that it is due to a good quality/price ratio, “Our machinery is competitive in quality, technological level and support. One more advantage is the price.”

One of the basic consumers is Russia. During the exhibition, the Ministry of Agriculture and Food had negotiations with delegations from the Astrakhan, Amur, Leningrad, Vologda and Moscow regions, as well as from Primorsky Krai, Department of Trade and Services of Moscow. The attention of the Russians was focused on modern machinery. Belarusian trucks, tractors and combine harvesters are bought in all regions of Russia. For example, a caterpillar combine harvester, developed by Gomselmash, literally saved a crop in the Amur Region last year. Because of the high humidity of the soil, all other machinery was useless.

Not casually was the Belagro-2014 visited by participants of the first Forum of Regions of Belarus and Russia — ‘The effective development of agro-industrial complexes of Belarus and Russia are a major condition of food safety of the Union State’, led by the chairmen of the upper chambers of parliaments of two countries, Anatoly Rubinov and Valentina Matviyenko. Now the matter depends on new contracts.

The role of Belagro in the advancement of Belarusian machinery on the international market cannot be underestimated. Besides potential buyers visiting the exhibition for the purpose of checking out the ranges, participants from abroad also get acquainted with the exposition. It is an additional chance for Belarusian enterprises to enter new markets. Austria, Great Britain, Germany, Italy, Spain, China, Lithuania, the Netherlands, Poland, Russia, Singapore, Turkey, Ukraine, France and the Czech Republic, a geographical list that is nowhere complete for demonstrating the companies which showed their production at the latest exhibition and estimated the achievements of their competitors. But what were the surprises this year?

The new energy-saturated tractor, the Belarus-4522,was called the discovery of the exhibition. Until now, the production association, MTZ, has only produced machinery with a capacity up to 350 horsepower. The new 450-strong tractor can use aggregates with width of grip of more than 16 metres, something impossible for its predecessor. In the field, the Belarus-4522 is capable to replace two, 200-strong machines.

Domestic agricultural production, machinery and equipment were shown in a technological chain with modern energy saving technologies of all industries connected both with manufacture of agricultural products, and with its processing, transportation, storage and realisation, something that experts found remarkable.

The exposition of foreign machine engineers also impressed guests at the exhibition. For the first time, the full-fledged exposition with combine harvester Acros and tractor ‘Versatile’ was shown by Russian company Rostselmash. The well-known Polish company, Contractus sp.z.o.o., acquainted visitors with machinery from the John Deere brand and Kverneland group. The German company, Convex International GmbH, displayed their beet-harvesting machinery. The long-term participant of Belagro, well-known in Belarus,StotzAgroService, again introduced a wide range of tractors and combine harvesters, at their platform, along with modern milking equipment.

Guests were also impressed by the exposition in the Football arena where meat-and-milk businesses, food industries, manufacturers of equipment for processing industry, refrigerating and packing equipment, veterinary medicines and medicaments were all on display from 150 companies from 14 different countries, including from Belarus, Russia, Great Britain, Germany, Italy, Spain, Lithuania, the Netherlands, Poland and Switzerland. Potential clients could not only see the technological innovations, but also taste sausages, cheese, yoghurt, and baked goods. And already, from the first day of work of the exposition, there were negotiations about joint projects and the establishment of new contacts. The Deputy Minister of Agriculture and Food of Belarus, Vasily Sedin noted that Belarus had become a worthy competitor in the European food market, and that demand for our production grows. 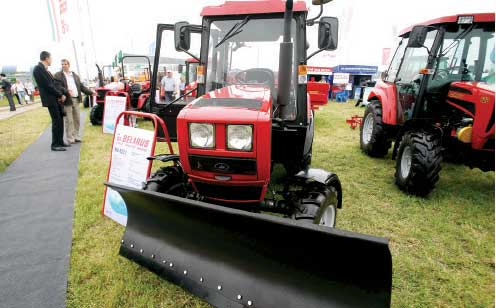 This year is special for Belarusian farming and industrial enterprises. After solving the issues of food safety and entry into foreign markets, the state has set a new task before the farming world, an increase in efficiency. Four draft decrees, aimed at the improvement of agrarian policy and financial improvement of agricultural enterprises, were prepared.

It is not about depriving industry of state support. The first Deputy Prime Minister, Vladimir Semashko considers that for further maintenance of food safety, the state is obliged to support agriculture. In the same way that the richest and advanced countries of the world do so: the USA, Germany, Canada and others. But the level of support in the developed countries stands at around 18-20 percent, while in Belarus it is 49. As a result, the state is strained in other areas, in particular industry, and at their expense, subsidises agriculture.

During recent years, village machinery-tractor fleets were practically fully updated, basically at the expense of domestic machinery. Such updating cost a lot for the state. Under a government programme of revival of villages, $37 billion were invested into the branch and rural infrastructure. Certainly, in many respects it increased the level of agricultural manufacture, Vladimir Semashko considers, “Even the weakest state farm has the possibility to sow everything during 9-10 days and for 3-4 weeks to reap the crop. It possesses such technical possibilities. That means that it is possible, without problems in target dates, to carry out sowing campaigns and to reap the crop loss-free.”

The environmental conditions in Belarus are no worse than in the Czech Republic or Germany, therefore Belarusian farming needs to reach similar efficiency.

“If the state has given modern machinery, then it is time to start working at a European level,” the First Deputy Prime Minister considers. 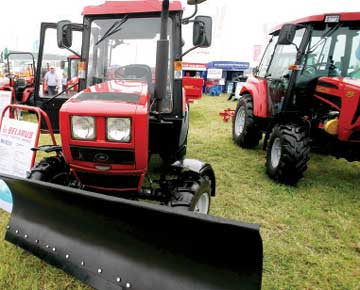