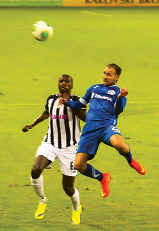 Shakhtyor Soligorsk was the first to finish its match, with Sergey Borovsky’s trainees showing consistent play, dominating the first half of the game in Eindhoven, against Dutch PSV. The hosts were hardly given the opportunity to shine, but took greater initiative in the second half.

The score opened in the 55th minute, when Adam Maher’s ball hit Nikolay Yanush’s leg, sending a ricochet into Artur Kotenko’s net. With the score at 1:0, just one minute later, Soligorsk’s Alexey Rios shot from 12m away, sadly sending the ball soaring over the net. The Dutch had several more perfect opportunities, but Shakhtyor’s goalkeeper saved each attempt and no further goals were scored.

Dinamo Minsk played at home against Portuguese Nacional CD more successfully, despite rain over Borisov Arena. In the 44th minute, just before halftime, Dinamo gained the upper hand over Funchal. Dinamo Chigozie Udoji’s pass was stopped through an unallowable method, which led Minsk captain Igor Stasevich to take a penalty successfully. Vladimir Zhuravel’s squad continued to attack in the second half, with Nemanja Nikolić bringing a second goal in the 55th minute, leaving the score at 2:0.

The guests rallied, causing anxiety for Minsk fans. However, Alexander Gutor and the others in defence kept the Portuguese from scoring a single goal. Winning 2:0, Di namo will go to Portugal in a very good mood.
Заметили ошибку? Пожалуйста, выделите её и нажмите Ctrl+Enter